Is a charter school likely to fail? Look at the application. 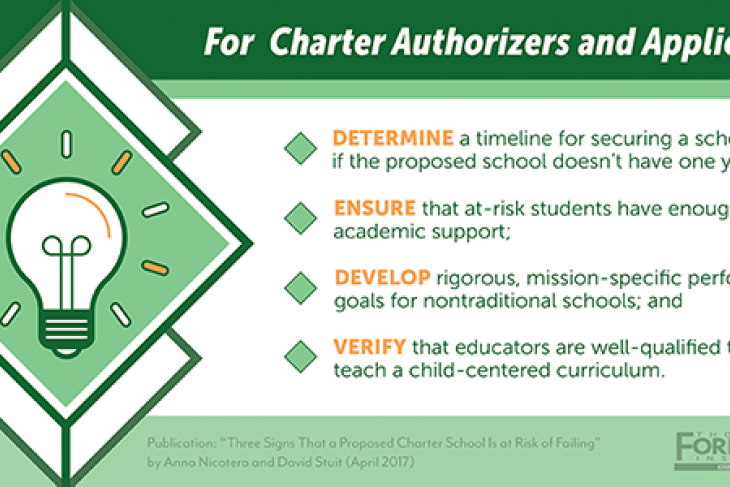 Some charter schools do far better than others at educating their students, a reality that has profound implications for charter-goers, and for the charter sector writ large. Painful experience also shows that rebooting or closing a low-performing school is a drawn-out and excruciating process that often backfires or simply doesn’t happen. So what if we could predict which schools are likely not to succeed—before they even open their doors? If authorizers had that capability, they could select stronger schools to launch, thereby protecting children and ultimately leading to a higher-performing charter sector overall.

A new Fordham study, Three Signs That a Proposed Charter School Is at Risk of Failing, employs an empirical approach to do just that. Authors Dr. Anna Nicotera and Dr. David Stuit, respectively senior associate and co-founder of Basis Policy Research, coded charter applications for easy-to-spot indicators and used them to predict the schools’ academic performance in their first years of operation.

Yet despite the vigorous screening process that authorizers used to determine which applicants to turn down and which to entrust with new schools, 30 percent of the approved applications in the study led to charter schools that performed poorly during their first years of operation. Given that research has shown that a school’s early-year performance almost always predicts its future performance, those weak schools are unlikely to improve.

The study found three risk factors that were present in the approved applications that also turned out to be significant predictors of future school performance in the initial years:

Moreover, the study also found indicators that made it more likely authorizers would reject the application entirely. Those included, among others:

Here’s what we make of those findings.

First, authorizers already have multiple elements in mind that they use to screen out applications. The factors named above that are already linked to rejection may well predict low performance, had the schools displaying them been allowed to open. But since those schools did not open, we have no way of knowing for sure. Still, the authorizers we studied—and their peers throughout the country—would probably be wise to continue to view these factors as possible signs of likely school failure and to act accordingly.

Second, we were somewhat surprised to see that an applicant’s intention to use a child-centered, inquiry-based instructional model (such as Montessori, Waldorf, or Paideia) made it less likely that the school would succeed academically in its first years. It’s hard to tell what’s going on here. Some of these pedagogies, expertly implemented, can surely work well for many children. But they are not intended to prepare students to shine on the kinds of assessments that are typically used by states and authorizers to judge school performance—in other words, the same tests that our research team used to judge quality for purposes of this analysis.

We do not mean to discourage innovation and experimentation with curriculum and pedagogy in the charter realm going forward. That sector’s mission includes providing families with access to education programs that might suit their children and that might not otherwise be available to them. Fordham is a charter authorizer itself (in our home state of Ohio) and we’re keenly aware of the need to balance the risk that a new school may struggle academically against a charter’s right to autonomy and innovation. Well-executed versions of inquiry-based education surely have their place in chartering. But the present study finds that they boost the probability of low performance as conventionally measured.

Third, let’s acknowledge that quality is in the eye of the beholder. Many of these child-centered schools aren’t “failing” in the eyes of their customers. The parents who choose them may not care if they have low "value added" on test scores. But authorizers must balance parental satisfaction with the public’s right to assure that students learn. Schools exist not only to benefit their immediate clients but also to contribute to the public good: a well-educated society.

Yes, it’s a tricky balance, especially in places where dismally performing district schools have been the only option for many youngsters. The best we can say to authorizers is to exercise your authority wisely. Consider the quality of existing options, plus a prospective charter school’s ability to enhance those options—not only academically, but in other ways fundamental to parents and the public. Pluralism is an important value for the charter sector, and is worth taking some risk to achieve.

Fourth, these findings aren’t a license for lazy authorizing. The trio of significant indicators that we found helps to identify applications that have a high probability of yielding struggling charter schools. But these aren’t causal relationships. Nor do they obviate an authorizer’s responsibility to carefully evaluate every element of a charter application. If our results are used to automatically reject or fast-track an application, they have been misused. Yet they ought, at minimum, to lead to considerably deeper inquiry, heightened due diligence, and perhaps a requirement for additional information.

Deciding whether to give the green light to a new charter school is a weighty decision. This report gives authorizers, operators, and advocates one more tool in their toolkit.