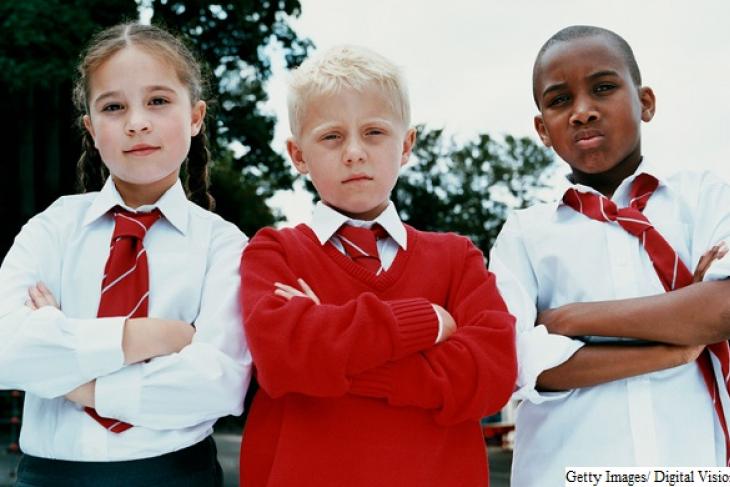 Gary Larson’s famous comic strip The Far Side was as insightful as it was hilarious. But given the recent consternation in the education reform movement, one of his best comes to mind. In it, two bears are caught in the crosshairs of a rifle. The one most clearly in the hunter’s sights points nervously at the unsuspecting companion to his right.

The comic sheds a great deal of light on the behavior of many charter school advocates with the now-increased interest in private school choice bubbling up in D.C. with Betsy DeVos’s nomination as education secretary.

What’s unfortunate is that the self-preservation instinct in this instance, which would make private school choice the target, is shortsighted, both for our kids and for the politics of advancing “choice” for all America’s children not lucky enough to win the parent or ZIP code lotteries.

For starters and perhaps most poignantly—and again to Larson’s work—both bears are actually in danger, with the question being, simply: Whom will the hunter pull the trigger on first?

Private school choice fights are long-standing and contentious in states like Florida, where the teachers union just lost a three-year battle to have the program, which enrolls ninety-seven thousand students and has strong support from African Americans, declared unconstitutional. But there is progress also being made, with progressive Maryland, my home state, even passing a small voucher program in 2016.

Conversely, charters have suffered serious setbacks recently, the most significant being the failed effort to lift the charter school cap in Massachusetts. This is particularly relevant as some education reformers—recently confused about the value of pragmatism versus their own partisan progressivism—now laud Bay State Sen. Elizabeth Warren for her sweeping attack of Secretary-nominee DeVos, a strong charter supporter.

Warren’s critique of DeVos reads like a list of talking points from the National Education Association and the American Federation of Teachers. To be sure, this set of attacks would have been no different with a nominee Michelle Rhee, Eva Moskowitz or other reform standard-bearer.

At the DeVos hearing, Warren happily held up a letter sent to her by the Massachusetts Charter Public School Association expressing concern about the quality and oversight of charter schools in DeVos’s home state of Michigan.

All of this posturing, which ostensibly forgives Warren for spiking the effort to lift the Massachusetts charter cap, seems confused at best, and lost at worst. It also conveniently ignores her own flip-flop on vouchers as well. In either case, it’s an uncertainty within the school choice movement whose impact is ultimately felt by kids looking for more educational opportunity.

The simple truth is that the only people having a “good choice” versus “bad choice” fight right now are charter advocates. And ironically this good/bad distinction isn’t about quality of choice (the measure of which good-natured people can disagree on); it’s singularly about the type of choice.

Those who oppose all choice, like AFT President Randi Weingarten and others on former presidential candidate Hillary Clinton’s short list for education secretary had she won the election, would not have made any distinction of this sort. It’s the worst sort of revisionism to believe otherwise.

From a political perspective, charters in many of the country’s states are now butting up against the walls created by an urban movement focused on low-income families in densely concentrated areas. Though from a social-justice perspective this makes perfect sense—and the equity message inherent in this structure resonates deeply with many charter advocates, including myself—it has confined the movement’s ability to advocate for itself to smaller constituencies with limited ability to affect policy or politics at a statewide level.

Private schools, however, are “everywhere,” which is to say there are very few electoral districts without one and the overall constituency is diverse in terms of location, ethnicity and income. Instead of pointing at the other bear here, it might be better to team up and go after the hunter together.

Private and charter school coalitions are making great strides politically in places like New York where there is an understanding that the enemies of choice are common enemies across both sectors. This lack of political and regional diversity in chartering is problematic in a way that good coalitions can fix quickly but slow charter sector growth alone likely never will.

Lastly, and though some folks have been more thoughtful about this than others, the assertions of “We’re not unregulated private schools” by many charter purists aren’t just unhelpful, they’re inaccurate and, arguably, desperate. There is no such thing as an unregulated voucher or choice program in the United States of America. There are, however, programs with varying degrees of regulation working to accomplish different policy or political goals.

Pennsylvania’s Educational Improvement Tax Credit, which was increased twice under former Democratic governor Ed Rendell, has a different goal than the Arizona educational savings account program for students with special needs. As a result, these programs are regulated differently and even ranked differently by private school choice supporters.

This should sound familiar to charter advocates. Despite the comprehensive work of the National Alliance for Public Charter Schools and others on what a model charter law should be, there still is no consensus charter law that’s been adopted uniformly across the country.

As a result, charter populations, and results, look different in a state like Utah than they do in a state like Ohio, which has recently overhauled its law. Indeed, the laws are rated against each other precisely because they represent a federalist mix of differing amounts of regulation, not a solitary view on the best way for individual states of differing character to bring charter schools into the world.

It’s also worth noting that, unlike charter schools, which have no provisions on the household income of their students, private school choice programs routinely feature them and are directed not just at the students with the least choice but those with the least money as well.

As an advocate who fiercely supports “choice” in all of its forms, I’d encourage charter-only advocates to take down the temperature a bit. What’s at stake is not the future of chartering but the future of choice.

Well-meaning advocates can disagree on how we get there, but the ones who want to empower more families to make the best decision for their child regardless of income and in a way that is politically sustainable should focus on us getting there together.

Editor’s note: This article was originally published in a slightly different form by The 74.