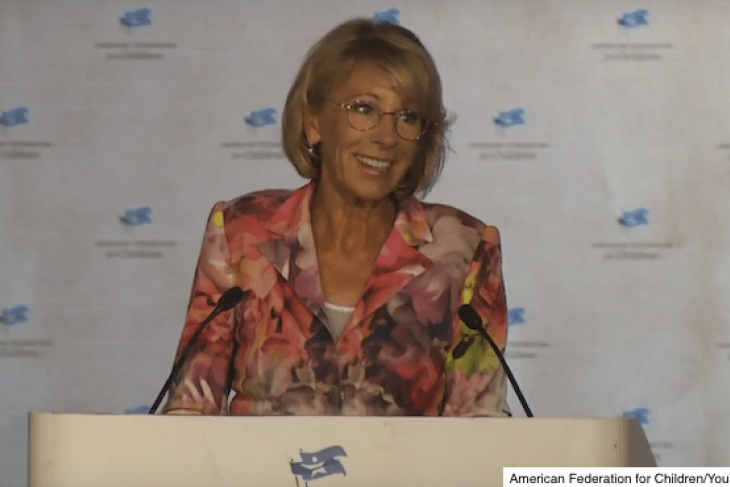 DeVos is a philanthropist based in Michigan, where she has chaired the Republican party and influenced many of the state’s education policy decisions, including the expansion of vouchers and the passage of Michigan’s charter school law in 1993. She has also served as the chairman of the board of the American Federation for Children, as well as a board member of the Foundation for Excellence in Education and the Education Freedom Fund.

Here, in her own words, are some of Betsy DeVos’s thoughts on education:

1. On being picked for education secretary: “I am very excited to get to work and to talk about my thoughts and ideas on making American education great again. The status quo is not acceptable. I am committed to transforming our education system into the best in the world. However, out of respect for the United States Senate, it is most appropriate for me to defer expounding on specifics until they begin their confirmation process.” 2016.

2. What we should strive for in American education: “I believe every child, no matter their zip code or their parents’ jobs, deserves access to a quality education.” 2016.

3. Education politics: “Education should be non-partisan.” 2013.

4. High standards and the Common Core: “I am not a supporter [of the Common Core]—period. I do support high standards, strong accountability, and local control. When Governors such as John Engler, Mike Huckabee, and Mike Pence were driving the conversation on voluntary high standards driven by local voices, it all made sense. Have organizations that I have been a part of supported Common Core? Of course. But that’s not my position. Sometimes it’s not just students who need to do their homework. However, along the way, it got turned into a federalized boondoggle.” 2016.

6. School choice’s many components: “We think of the educational choice movement as involving many parts: vouchers and tax credits, certainly, but also virtual schools, magnet schools, homeschooling, and charter schools.” 2013.

8. Private school choice: “Charter schools take a while to start up and get operating. Meanwhile, there are very good non-public schools, hanging on by a shoestring, that can begin taking students today.” 2013.

9. Homeschooling: “Homeschooling represents another perfectly valid educational option. We’ve seen more and more people opt for homeschooling, including in urban areas. What you’re seeing is parents who are fed up with their lack of power to do anything about where their kids are assigned to go to school. To the extent that homeschooling puts parents back in charge of their kids’ education, more power to them.” 2013.

10. Politics of school choice: “[W]e believe that the only way that real education choice is going to be successfully implemented is by making it a bipartisan or a non-partisan issue. Until very recently, of course, that hasn’t been the case. Most of the Democrats have been supported by the teachers’ unions and, not surprisingly, have taken the side of the teachers’ unions.” 2013.

11. Educational freedom through technology: “What we are trying to do is tear down the mindset that assigns students to a school based solely on the zip code of their family’s home. We advocate instead for as much freedom as possible. One long-term trend that’s working in our favor is technology. It seems to me that, in the internet age, the tendency to equate ‘education’ with specific school buildings is going to be greatly diminished.” 2013.

12. DeVos’s start in education, and the limits of scholarship funds: “I got involved [in education] by starting a foundation that gave scholarships to low-income families so that parents could decide where their kids would go to school. We realized very quickly that, while it was wonderful to help some families through the scholarship fund, it was never going to fundamentally address the real problem. Most parents were not going to get the scholarship they wanted, and that meant most kids would not have the opportunities they deserved.” 2013.

13. What drew DeVos to the private school choice movement: “Well, it’s not like there was a single incident that drew me in [to the private-school choice movement]. It was more gradual than that. When Dick and I had school-age children ourselves, we visited the Potter’s House Christian School, which for more than 30 years has been serving a part of Grand Rapids with many low-income families. While we were at the school, we met parents who were doing everything in their power to have their kids in an environment that was safe, where they were learning, and where the atmosphere was just electric with curiosity, with love for one another. We kept going back. We would visit, and think about what we saw, and we’d want to visit again. We knew we had the resources to send our kids to whatever school was best for them. For these parents, however, paying tuition was a real sacrifice. We started supporting individual students at the school, and that grew into a larger commitment. To this day, we support the Potter’s House at a significant level.” 2013.

14. One of her biggest successes as a private school choice advocate: “Florida. Through its tax-credit scholarship program, Florida has enjoyed the nation’s longest period of widespread educational choice, and through the expansion of the program, it has an ever-growing number of students—currently over 50,000—attending the school of their family’s choice.” 2013.