As Arne Duncan exits, another missed opportunity for bipartisanship 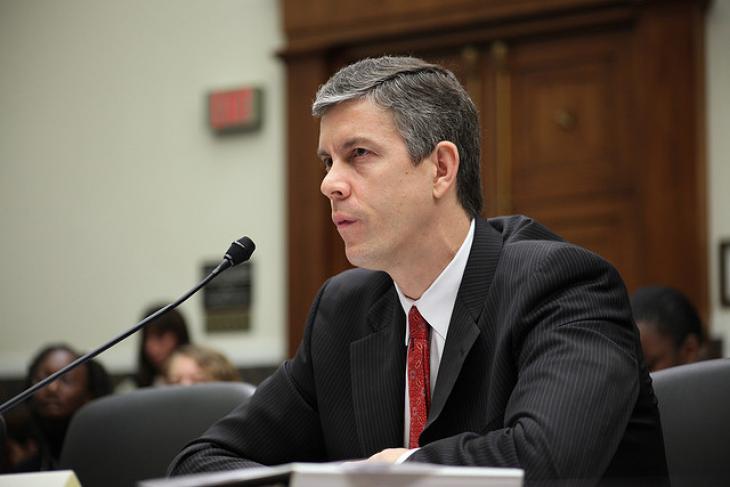 Secretary of Education Arne Duncan deserves the many plaudits he received on Friday from President Obama and his friends in the reform community—and even from his sometime-foes in the teachers’ unions. As everyone remarked, he’s a good and decent man, a fighter for disadvantaged kids who’s passionate about his work and loyal to his team. That was certainly my personal experience with him; he was more gracious toward me than I probably deserved, considering the many swipes I’ve taken at his policy decisions over the years.

So please bear with me one more time: Even at this moment of celebration, congratulation, and reflection regarding Arne’s time at the helm, the Obama administration can’t seem to help itself. It almost seems determined to poison the well with Congress and play to the stereotype of a government unwilling to abide by constitutional limits.

I’m referring, of course, to the decision to appoint John King (another smart, committed reformer and all-around great guy) as “acting” education secretary for an entire year rather than putting him through the Senate confirmation process.

It’s certainly true that the confirmation process has slowed to an agonizing pace over the past few decades. And the Bush 43 administration also opted to avoid some confirmation battles in its waning days. But not, as far as I know, for cabinet-level officials. There’s reasonable debate about whether, say, the assistant secretary for planning, evaluation, and policy development needs to be confirmed by the Senate. But there’s no debate that heads of cabinet agencies are subject to the Constitution’s advice and consent clause. They (along with federal judges) are arguably the main reason the clause is there. It’s part of what we quaintly term the “separation of powers.”

I’m hoping that reporters press the White House for answers. Why does it think it can ignore the Senate’s role in confirming cabinet members? And why is it afraid to put John King, a strong candidate who backs many Republican principles and is likely to have GOP supporters, through the process?

To be sure, a confirmation hearing these days is never a picnic. Some Republicans would complain about the Common Core. Some Democrats would complain about testing and teacher evaluations. But so what? That’s the process, and King can take it. He dealt with angry mobs in New York; surely he can survive the Senate HELP committee. (Lamar Alexander and Patty Murray are among the most decent human beings left on Capitol Hill.)

Perhaps the administration is worried that Senate Republicans would use the confirmation as leverage to get something else it wants. But that’s politics. What happened to basic respect for the political process? What about the Constitution?

All of us know that we’re living through painfully polarized times. We tend to blame the other side for our ideological rigidity and the resulting gridlock. I know that people inside the current administration—and their friends inside the reform movement—see Congress as broken, hopeless, and intransigent. And there’s clearly some truth in that.

But Team Obama needs to understand that it’s contributing to the problem. Again and again, it has refused to show restraint, constitutional deference, or sincere interest in compromise. With Race to the Top, it could have invited states to submit their best ideas. Instead, it asked them to swear allegiance to a prescriptive reform agenda. With No Child Left Behind waivers, it could have provided regulatory relief to fix a law that was badly out of date and not working very well. Instead, it added conditions that went far beyond statutory limits and forced states to commit to half-baked teacher evaluation policies—planting the seeds for a widespread backlash against the bigger reform agenda, including Common Core. And with the reauthorization of the Elementary and Secondary Education Act (ESEA), it could have worked in good faith with congressional Republicans to find a reasonable compromise on the appropriate federal role going forward. Instead, it has demonized conservatives as insufficiently committed to poor and minority children, incidentally going a considerable way to derail the reauthorization process. (It’s also true that John Boehner’s exit pushes another car or two off the track.)

John King’s appointment could be (or could have been) an opportunity to turn the page. He should ask to go through the Senate confirmation process. He should, perhaps, insist on it. But that’s not all. He should also provide real leadership in getting an ESEA revamp across the finish line by embracing the bill that the Senate already passed in overwhelmingly bipartisan fashion. He should make clear that he views that bill as far from perfect. But he should support it anyway, fight for it, ask House Democrats to vote for it, and urge President Obama to sign it—because he understands that in a democracy, especially at a time of deep political polarization, compromise is the only alternative to stasis.

Now it’s John King’s turn to wear the crown. Let’s hope he’s willing to share power with other people, recognize his own constitutional obligations, exert his own political good sense, and urge the White House to do likewise.

House Committee on Education and the Workforce Democrats/Flickr