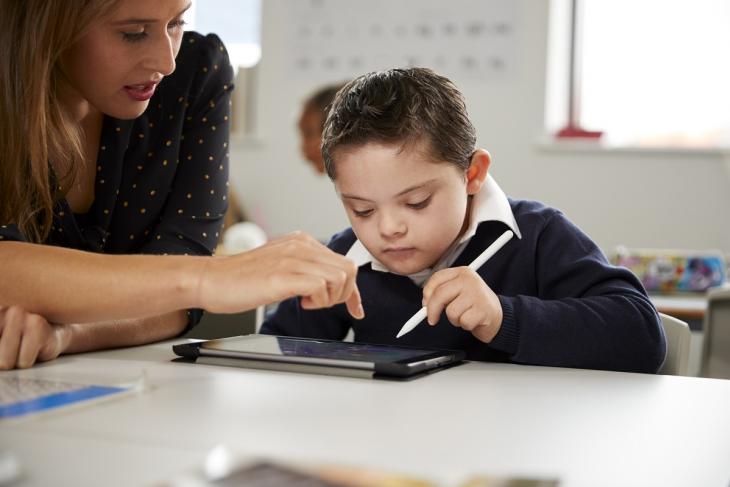 When President Obama signed the Every Student Succeeds Act (ESSA) into law back in December 2015, it marked a new day in federal education policy. ESSA provides states and districts with plenty of flexibility, but it retains a few policies from its predecessor—NCLB—related to testing. States are still required to administer annual assessments in certain grades, disaggregate and report results according to student subgroups, and include results in state accountability systems.

Both NCLB and ESSA identify students with disabilities as a subgroup whose results must be reported. During reauthorization debates, disability rights advocates pushed hard to ensure that specific NCLB provisions would carry over into ESSA. Chief among them was the requirement for students with disabilities to be held to the same expectations as their peers, and for schools to continue to be held responsible for their performance. (A very small number of students with cognitive challenges can be tested via alternative assessments.)

A quick look at the history of federal education policy reveals why disability rights advocates were so adamant. A 2018 report from the National Council on Disability notes that, prior to NCLB, students with disabilities were “excluded systematically” from participating in state assessments. This policy was “problematic in that testing results provided inaccurate information about school performance, referrals to special education increased, and students with disabilities were subjected to lower expectations.” It wasn’t until NCLB—which built on a foundation already set by the 1997 reauthorization of the Individuals with Disabilities Education Act—that parents and educators had “tangible information” about how special needs students performed in relation to their peers.

The fact that ESSA, a fiercely debated but ultimately bipartisan effort, maintained NCLB’s testing requirements was a huge win. Students with disabilities may need extra support, but they are just as capable of learning as their peers. They deserve to be held to the same expectations. That’s why it’s somewhat surprising that Ohio’s recently passed general operating budget seems to run afoul of what the special needs community advocated for during the ESSA process.

Ohio’s budget contains a multitude of education provisions, including a variety of changes to Ohio’s voucher programs. Many of these changes are good news for students and families. But others, particularly those related to student testing, are less clear cut. I’ve already written about a problematic change that allows private schools that enroll voucher students to administer an alternative standardized assessment instead of the state exams given to public school students in grades three through eight.

A second change applies to students with special needs who use a voucher. It allows private schools to excuse students with disabilities from taking any standardized tests at all if the school develops a written plan that determines the state tests, as well as alternative tests with accommodations, do not “accurately assess the student’s academic performance.” According to the law, the plan must be developed in consultation with the student’s parents, and must include an “academic profile” of the student’s performance that will be reviewed annually.

The upshot of all this is that private schools now appear to have free rein to decide whether voucher students with special needs are held to the same expectations as their peers. The state already permitted special needs students for whom testing might be inappropriate to take an alternative assessment. The budget provision goes beyond that. It’s unclear what additional frameworks or rubrics would be used to determine that state tests and the permitted alternatives fail to “accurately assess” student performance. There’s no definition for what accuracy means in this context. And it is downright problematic that the state would imply its chosen tests are inaccurate. How can tests be accurate and fair for public school students—including those with disabilities—but not for those enrolled in private schools?

It’s similarly unclear how parents will be involved in the process. The law stipulates that private schools must work “in consultation” with parents, but there are no guardrails. Can schools that don’t want to test special needs students approach parents with the recommendation that the students opt out of testing? If nothing else, this would allow private schools to avoid the hassle of testing, but it could deprive parents of valuable information.

Finally, there are no provisions outlining what an “academic profile” must contain. If state tests and alternatives that provide accommodations are deemed inaccurate, it’s possible that no test results will be included. That leaves class grades and teacher evaluations which—though meaningful and important—are far more subjective and difficult to compare across grade levels and schools. There are also no requirements for how schools must annually review plans. The process could be thoughtful and based on data and feedback. But it could also become just another box to check off.

It’s true that private schools, by virtue of being privately funded rather than state funded, are not subject to the same laws as traditional district and charter schools. The ESSA provisions relating to special needs students discussed earlier in this piece don’t technically apply to private schools. But voucher students attend private schools using state funds. That’s why they were required to take state tests in the first place—because the state has a responsibility to ensure that these funds are spent well. Fulfilling this responsibility means ensuring that students who use vouchers receive a quality education. The state can’t do that if students with disabilities are being assessed in vastly different ways than their public school peers—or aren’t being assessed at all.

It’s also true that these students are attending private schools by choice. If parents don’t like the way a private school is educating their child, they are free to find a better option. But that’s far easier said than done. Many of the nearly 6,000 students who used the Jon Peterson Special Needs Scholarship—the voucher program open to students who have been identified by their district of residence as having a disability—in 2017–18 did so because their families found the services offered by the district to be lacking in some way. Where, exactly, are these students supposed to go?

Moving forward, it will be important for Ohio lawmakers to listen to feedback from disability rights advocates about this new provision. If families and advocates feel that it grants needed flexibility and doesn’t lower expectations for students with special needs, that’s good news. But if it doesn’t—if students with special needs are held to lower expectations than their peers like they were in the days before NCLB—then lawmakers need to make a change.