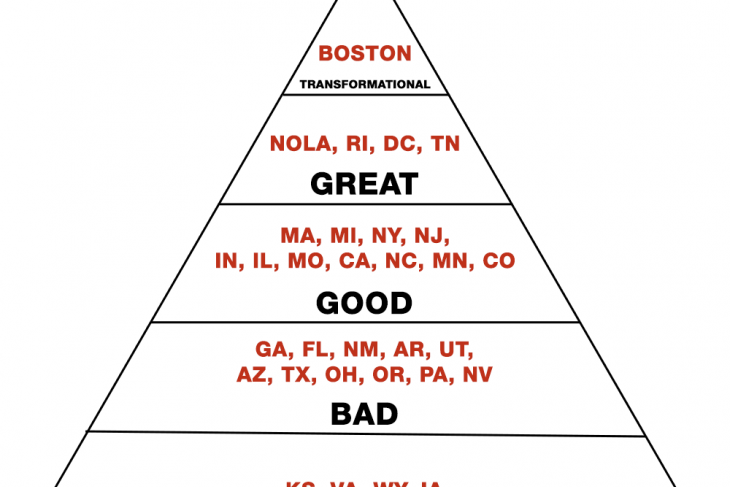 Over the past three weeks, Fordham’s Flypaper blog hosted the charter school wonk-a-thon, an exercise in punditry and policy analysis that exceeded all expectations. (Congrats to our winning wonk,Joe Siedlecki of the Michael and Susan Dell Foundation.) Let me ambitiously attempt to synthesize the major arguments into a unified theory: the Wise Wonks’ Hierarchy of Charter School Quality. 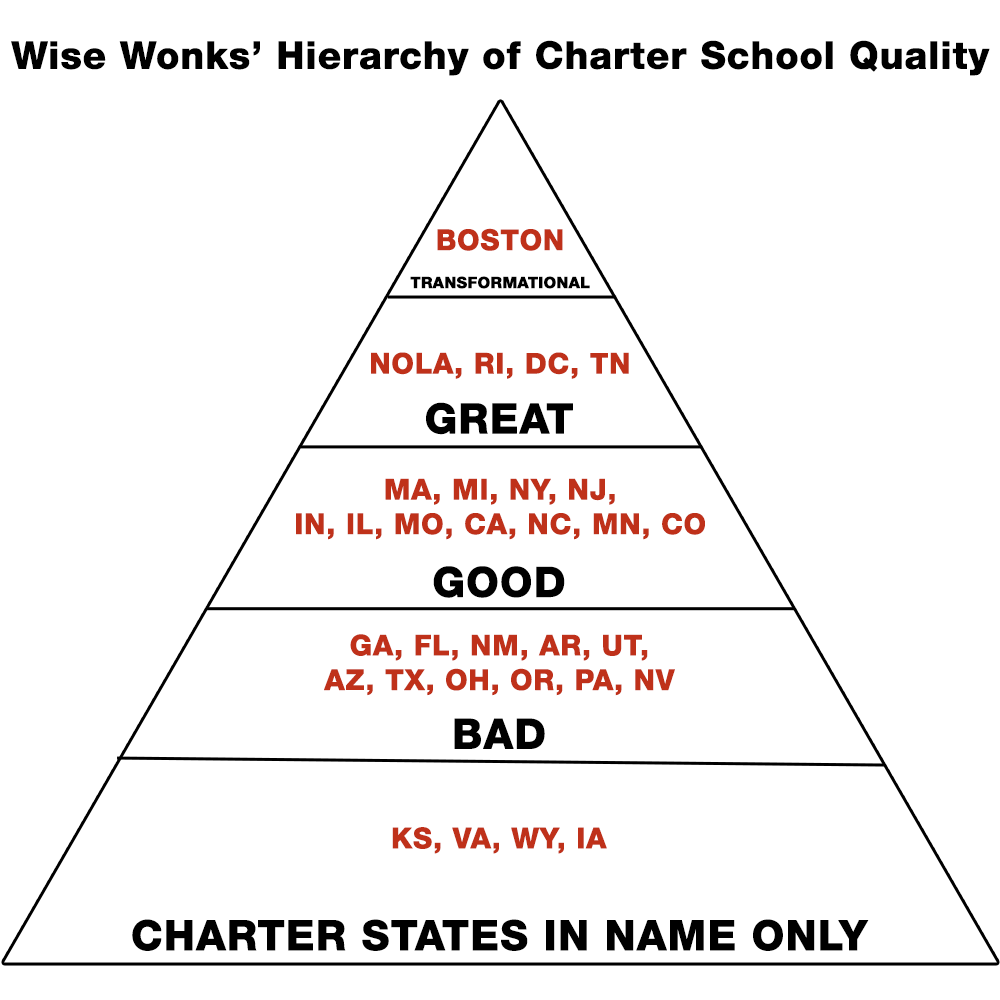 One level up, we find Bad Charter Sectors. These are the states at the bottom of the heap when it comes to test-score gains as measured by CREDO* and other sophisticated analyses. (No, test scores and score gains aren’t everything, but let’s assume for now that these indicators relate to the other stuff we also care about, such as long-term student success.) Their charters mostly falter because of some combination of low-quality authorizers (unselective when handing out charters, unwilling to shut down low performers) and mediocre funding. (In a few cases, such as Arizona, there were major problems in the past but the sector is working on digging itself out of a hole.)

Next we see Good Charter Sectors. Going from “bad to good” was a major focus of the wonk-a-thon, and most of our pundits posited that strong policies were essential. But which policies? Unpack the analyses and it boils down to two issues (again): strong authorizing and sufficient funding. As per the former, it’s essential for states to allow entities other than districts to authorize schools and to create high expectations for organizations that play that role. As for the latter, states must find ways to get charter schools to a decent level of per-pupil funding, plus facilities funding, if not in comparison to traditional public schools then at least in terms of real dollars. It’s hard to find many “good” charter sectors making do with less than, say, $7,500 in per-pupil revenue. Even considering variations in costs of living, $10,000 is probably a better baseline, and closer to $15,000 is necessary if states or cities want to attract out-of-state networks.

Here we must introduce a wrinkle, thanks to our wonks. Many suggested workarounds where sound policies are not in place. Take California, in particular: most of its authorizers are mediocre or worse and its per-pupil funding is in the tank, but because the California Charter Schools Association plays a very effective self-policing role, the Golden State’s charters perform better than expected. And because California’s philanthropists have stepped up to the plate, its charters aren’t as underfunded as state dollars alone would imply. Several other states are fortunate to have conscientious authorizers that make up for their mediocre charter policies.

Continuing up the pyramid, next we find Great Charter Sectors. The “good-to-great” question was also wrestled by our muscular analysts. The consensus appears to be that these higher levels of performance have less to do with policy than with everything else: the “ecosystem” of reform in a given place (usually a city) and its network of “human-capital providers,” expert charter-management organizations, leadership-development programs, school-incubator efforts, local funders and civic leaders, etc.—in other words, what conservatives like to call “civil society”: the space between the government and the individual (in this case, between government and individual schools). Once a certain degree of policy adequacy is in place (reasonably smart laws around autonomy and authorizing, decent-enough funding), the difference between good sectors and great sectors boils down to the “ecosystem” built by the local reform community. That strikes me as a correct, and hopeful, conclusion because most of this work is within “our” (reformers’) control. (It also means that we can’t regulate our way to excellence.)

At the pinnacle of the pyramid are Transformative Charter Sectors. These are the places where charters are significantly and consistently shifting outcomes for children in terms of academic achievement, college readiness, and, one hopes, upward mobility. Here, per Michael Goldstein, stands Boston, our City on a Hill. And as Goldstein argues, it has everything the other great charter cities have, plus a preponderance of fantastic “no-excuses” charter schools—because, at the end of the day, it’s all about the schools.

So there you have it: the Wise Wonks’ Hierarchy of Charter School Quality. At this stage, it’s just a theory and can surely be refined, as can be the placement of states and cities within it. Did I overlook an important element that assists jurisdictions in jumping from bad to good, good to great, or great to transformational? For instance, none of our wonks focused overly much on school closure as a strategy toward greatness; most seem to see it as a way to raise the floor. Is that the right way to think about it? Is that how it’s working in New Orleans, where it’s become a part of standard operating procedure? Am I naïve to place such importance on funding? Are the incubators and local “growth funds” and “human-capital pipelines” as important at the top of the hierarchy as we think?

The wonk-a-thon is over, but let the wonkery continue.

* These test score gains are average impacts for the five school years between 2006–07 and 2010–11 (except for a handful of states with missing data for some years). It's possible that some states' charter sectors saw more rapid growth in the more recent school years, but that information is not (yet) publicly available.