What Betsy DeVos should say about vouchers, LGBT rights, and religious liberty 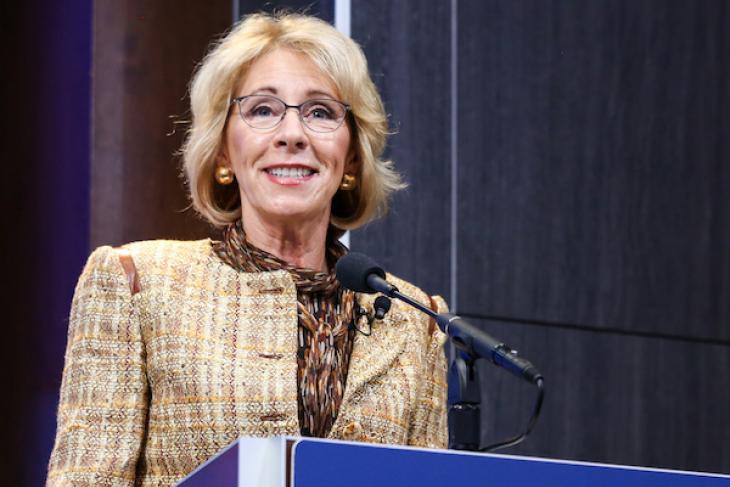 At a House budget hearing two weeks ago, Representative Katherine Clark (D-MA) pushed Secretary of Education Betsy DeVos to comment on a Christian school’s policy toward LGBT students and families. As described by the Boston Globe:

Clark waited patiently for her turn to question DeVos in the packed hearing room, and when the opportunity came, she asked about the private Lighthouse Christian Academy in Bloomington, Ind.

The school, Clark said, receives more than $665,000 in state vouchers, while noting in its handbook that it may deny admission to students from families where homosexual or “alternate gender identity” is practiced.

Leaning into her microphone and shaking her fist, Clark asked: If Indiana seeks federal funding as part of the president’s proposed voucher program, “will you stand up that this school be open to all students?”

DeVos tried to pivot, and then, after repeated questions from Clark, said that the decision would be left up to states, leading papers nationwide to run headlines such as “Betsy DeVos Refuses to Rule Out Giving Funds to Schools That Discriminate.”

We should expect to hear more of this line of questioning tomorrow when DeVos appears before Senate appropriators.

So how should Secretary DeVos respond—especially if she wants to appeal to people who support both school choice and gay rights, like me? She might try this:

Thank you, Senator, for that very important question. As you know, this is a tough issue, as there are two fundamental principles in tension with one another. The first entails the rights and dignity of LGBT students, and the children of LGBT parents. As I have said before, I am very concerned about the physical and emotional well-being of such children and youth, who have long been subject to bullying and worse. And speaking personally, I find it reprehensible, and inconsistent with my own reading of Christian values, for a school to make students feel unwelcome because of their sexual orientation or because their parents are in a same-sex relationship. Thankfully, I believe the school you referenced is more the exception than the rule when it comes to private and religious schools.

But another important principle is also at stake here, and that is the principle of religious liberty, enshrined in the First Amendment as the right to free exercise of religion. This principle, too, commands our respect. Religious schools, like religious communities, are built around a set of beliefs and a moral code. So we wisely give religious organizations the space to reach their own conclusions about sensitive issues like human sexuality. That is why several federal civil rights laws, including Title IX and the Americans with Disabilities Act, provide accommodations for religious organizations.

Furthermore, there is great value to all Americans in preserving and promoting a pluralistic school system that allows schools to come in all shapes, sizes, and moral codes, and that empowers families to find schools that match their own values and educational priorities. It’s important, too, to note that the multi-decade track record of religious schools demonstrates their capacity to provide life-saving opportunities for disadvantaged children. Not allowing such schools to serve students with publicly-funded scholarships amounts to taking choices away from parents.

School choice programs are hardly the only places where LGBT rights and religious rights come into tension. In fact, this happens in higher education, too. Under the Obama Administration, religious colleges requested, and received, approval to exclude LGBT students from their campuses. Yet students at these colleges continue to receive Pell Grants, and the institutions participate in other federal programs.

Many legal scholars believe that the previous administration had no statutory grounds by which to extend legal protections to gay, bisexual, and lesbian students because Congress has never enacted anti-discrimination laws to protect LGBT individuals. Extending civil rights protections to the LGBT community is certainly something that you in the legislative branch should consider. And I promise to enforce any civil rights laws that you enact.

A congressional debate over this issue would be healthy for America. We could address squarely the question of how to protect LGBT individuals, including children, while also respecting the rights of religious organizations. How this should work for schools could be part of the discussion. We already give religious schools leeway when it comes to hiring. Just as we wouldn’t expect a Montessori school to hire teachers who aren’t trained in, or committed to, the Montessori method, we wouldn’t expect a Christian school to hire teachers who are not committed to the Christian faith. The same holds true for Jewish schools, Muslim schools, and those of other faiths. For similar reasons, we may want to give such schools a wide berth when it comes to student admissions, so that they can maintain a community that is broadly committed to their religious beliefs.

But that is a question for you in the legislative branch to decide. My job is to enforce the laws, not make them. Until you act on this question, it is up to the states to determine how best to weigh the competing principles that are at play.

Maybe a statement of that sort would lead to better headlines than the ones from a few weeks ago; maybe not. But such an answer would provide some balance and perspective to a debate that is surely going to remain a central battleground in the war over vouchers.