Regular Flypaper readers know that I’ve been skeptical of the “college for all” movement, but I’m 200 percent behind the “college for more” movement. Among other reasons, that’s because completing college brings a strong economic payoff, particularly for young people growing up in poverty. According to Pew’s Pursuing the American Dream, such individuals are almost five times likelier to escape the lowest income quintile as adults if they obtain a bachelor’s degree.

And that’s not just because of the selection effect—the fact that colleges attract relatively able and motivated young people who do well regardless of the path they follow. There’s strong evidence that college adds real value in terms of students’ skills, knowledge, and career preparation, value that translates into higher earnings. Nor is money the only payoff; we’re all familiar with the “scissors charts,” popularized by Robert Putnam, which show the relationship between college attainment, the formation of two-parent families, and other positive life outcomes, including health and even happiness.

So it’s understandable why government and foundation officials have started giving the higher education system the “reform treatment” that was once reserved for our K–12 system; if it’s blocking opportunities for young people—especially low-income young people, as Susan Dynarski argued last week—then removing those barriers should be a top priority for U.S. social and education policy.

But is it? Is higher education really where the problem lies? Are there lots of students who enter college well-prepared for success, only to falter once they get to campus? That might have been the case once upon a time, but I don’t think the data support that storyline any longer. Take a look at this picture, which charts college matriculation, readiness, and completion rates (my sources are listed at the bottom of the page). 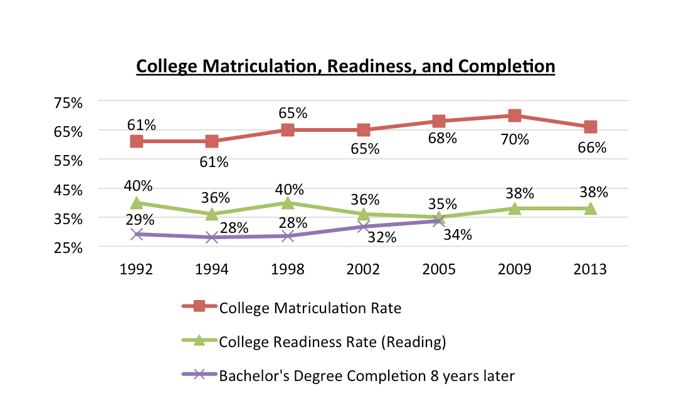 Back in 1992, 40 percent of twelfth graders were “college-prepared” in reading, according to the National Assessment of Educational Progress. Yet eight years later, just 29 percent of Americans aged 25–29 had obtained at least a bachelor’s degree. Some of that gap can be explained by high school dropouts—kids who left school before twelfth grade and would not be expected to get a college degree. But most could be seen as lost potential—young people who were academically prepared for college but either didn’t go or didn’t finish.

But note what happened by the high school class of 2005. Thirty-five percent of twelfth graders were prepared for college in reading (and 36 percent in math); eight years later, 34 percent of their age cohort had completed a college degree. This is good news: We closed the gap between college readiness and college attainment. But it also implies that if we want to increase college attainment, we need to make progress on college readiness. There’s little low-hanging fruit left for colleges to pluck.

To be sure, the notion of “college-prepared” is inexact. Some kids just below the line will succeed in college nonetheless (and may even be able to skip remedial courses); some kids over the line will falter (probably because, not surprisingly, young people need to be “prepared” in much more than reading and math to finish a college degree). Almost surely, as Dynarski’s analysis indicates, affluent, ill-prepared students are overrepresented among college completers while poor, well-prepared students are underrepresented. Helping those poor students get across the finish line is absolutely a worthy item on the higher education reform to-do list.

But until we start making significant progress at the K–12 level—and get many more students to the college-ready level before they land on campus—our dreams for significantly boosting the college completion numbers seem certain to be dashed. “Free” community college, co-requisite course-taking, additional student supports, etc.—those may or may not help at the margins. But the big potential still lies in improving our elementary and secondary education system. Government and foundation officials: Capisce?

In reading, the National Assessment Government Board estimates that “college-prepared” is equivalent to “proficient.” So these numbers are the percentage of all twelfth-grade students who were proficient in reading in those given years. (More background here.)

Bachelor’s degree completion numbers come from the National Center for Education Statistics’s Digest of Education Statistics, Table 104.20: “Percentage of persons 25 to 29 years old with selected levels of educational attainment, by race/ethnicity and sex: Selected years, 1920 through 2014." I added an eight year lag—so I used the 2000 numbers for the high school class of 1992, for instance.