The Urban School System of the Future: Applying the Principles and Lessons of Chartering 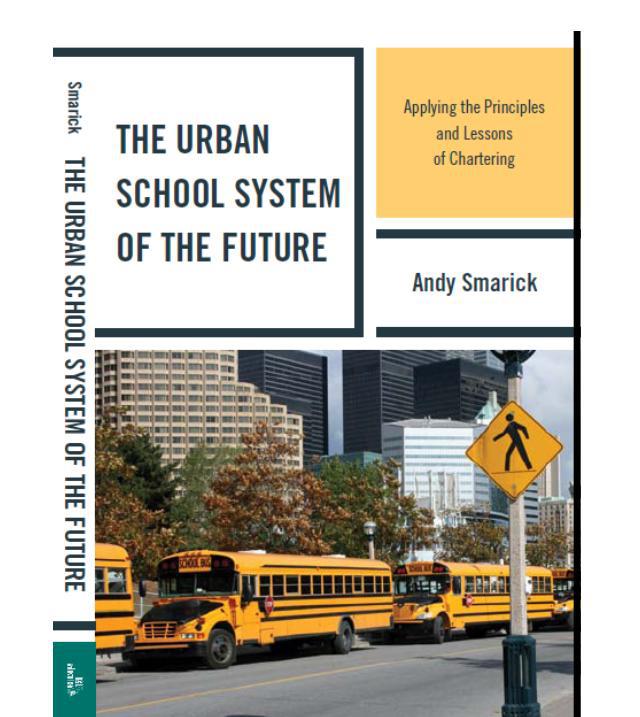 Andy Smarick had all but completed this swell book when he was snapped up by Chris Christie and Chris Cerf to fill the Number 2 job in the New Jersey department of education, which he did with much success over the past two years. During this time the manuscript ripened. Now, as a partner at Bellwether Education Partners and a Bernard Lee Schwartz Senior Policy Fellow here at Fordham, he’s been able (swiftly, at that) to polish and publish it. Now in print, it’s even better than the original draft thanks to Smarick’s latest experiences in the trenches.

Smarick’s starting place is the irrefutable contention that yesterday’s urban school system is broken beyond repair and needs to be replaced by something radically different if today’s children are to be soundly educated. What he would replace it with is a version of a “portfolio district” headed by a mayor-appointed “chancellor.” So far it sounds like D.C. and New York, but Smarick goes notably farther in three directions: He really does mean that all the schools in the city, not just a subset, would be run, charter-style, by outside operators, not by a municipal bureaucracy. Second, at least where this is constitutionally possible, he would include the city’s private schools in the arrangement, too. And third, he focuses laser-like on school effectiveness, finding some successful schools (for poor kids) in all three of today’s sectors (district, charter, private) but also too many mediocre (or worse) providers, again in all three sectors. (He’s no Pollyanna about private schools inevitably succeeding better than public schools, particularly with poor kids from tough neighborhoods. Some do. Many do not.) Part of the chancellor’s job is to repair or shut down ineffective schools in all three sectors—and find and empower competent alternate operators.

Yes, it’s risky to place so many education eggs in any one person’s basket (a point keenly made by AEI’s Mike McShane in a thoughtful review of Smarick’s book). A city could find itself with a lackluster chancellor, a moron, or one who works for a union-dominated mayor. In such a situation, it would be tragic if he/she had leverage over K-12’s private sector, too. At the very least, however, the chancellor should be able to rule weak private operators ineligible for publically underwritten students (i.e., those bearing vouchers or tax-credit scholarships). In any case, this complicated issue should not divert readers—or policymakers—from Smarick’s dead-certain core point, which is that the most vulnerable kids in American education, those in greatest need of outstanding schools to attend, are today victimized by a dysfunctional school-governance arrangement that urgently needs to be replaced by something very different.