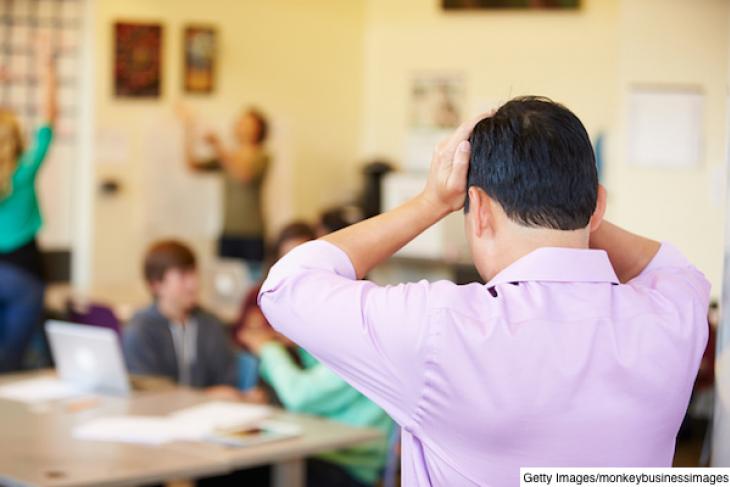 As Secretary DeVos and Attorney General Sessions and their teams work down the list of Obama-era mischief that needs reversing, let’s hope that their agencies’ joint 2014 “guidance” regarding school discipline is near the top.

This wasn’t a formal rule that can only be undone by engaging in an elaborate new regulatory process. No, it was actually more insidious than that—but also more easily correctable. It was a menacing, twenty-plus page “dear colleague” letter, co-signed by senior civil rights enforcers in the education and justice departments, and sent around the land to state and local education leaders.

Because it was “guidance” rather than “regulation,” it wasn’t—and isn’t—something that must be obeyed. But it was plenty chilling. Aimed arrow-like at “zero-tolerance” style school discipline as well as racial discrepancies, it said, in effect, that if anyone even hints that your discipline policy shows any of the (numerous) warning signs that suggest to us that discrimination might be occurring—these are itemized at length—our agencies will investigate. And if we find that you’re doing anything wrong, we have another long list at the ready, this time consisting of painful remedies we can apply to you.

As legal scholar Richard Epstein noted in a thorough and scathing Education Next review of the dear-colleague letter, “[T]he guidance offers no safe harbor for conducting routine discipline, free of constant federal oversight. Under the Dear Colleague letter, ED has virtually unlimited discretion in deciding, for example, whether ‘[s]elective enforcement of a facially neutral policy against students of one race is also prohibited intentional discrimination.’ Schools will be reluctant to take these cases to court for they always face the risk that ED and DOJ will claim that the observed differences in behavior were themselves caused by racially insensitive or inappropriate district policies.”

The single most troubling feature of this Orwellian guidance was the bald statement that “discrimination” in the application of school discipline does not necessarily mean that any individual was discriminated against. Rather, the two agencies applied the deeply controversial concept—beloved of civil-rights activists—known as “disparate impact.” Which means, in essence, this: should we learn that you discipline students from Group A more often than those in Group B, regardless of cause, provocation, or circumstance, and no matter how even-handedly you may have treated them all, we will nonetheless conclude that your discipline policy as practiced is discriminatory and we will take action to force you to mend your ways. (In this context, “groups” are distinguished by the usual suspect categories such as race, religion, gender, disability, sexual orientation, etc.)

As political scientist Josh Dunn wrote when the letter emerged, “the consequences for schools and particularly for minority students will be nothing short of disastrous if actually implemented. The only conclusion that can be drawn from these guidelines is that the Obama administration does not care about actual student behavior and only wants to focus on disembodied percentages regardless of their destructive educational consequences.”

We have no way of knowing how many federal investigations of this sort may actually have been undertaken in the three years since the “dear colleague” letter was sent (though that would be an excellent question for the Secretary’s office to pose to OCR!). But in a sense it doesn’t matter, for the purpose of the letter wasn’t to pave the way for lots of enforcement activity. It was to scare the bejesus out of U.S. educators when it comes to disciplining minority students so that there’d be little cause for actual investigations.

It certainly succeeded in raising consciousness around the country about school discipline, particularly the practice of suspending youthful miscreants—and it has also played into the hands of those who, for very different reasons, are striving to put charter schools into a regulatory box that curbs their autonomy and will gradually erode their appeal.

The extent to which Uncle Sam should intrude himself into school discipline practices—and the extent to which “disparate impact” should intrude itself into federal civil-rights policies—are hugely important issues, with or without charter schools. It seems to me unarguable that classroom behavior—and the consequences of misbehavior—is the proper purview of individual schools, districts, and states, which must strike a workable balance between fairness and due process for those who misbehave and the rights of a far larger number of students to calm, orderly, and unthreatening environments in which to learn. It seems to me just as unarguable that federal civil rights enforcement is warranted when actual acts of invidious discrimination take place, not when bean counters calculate that members of one group are being hauled to the principal’s office more often than members of another group. What if—just imagine—there are more incidents of misbehavior on the part of group A than group B? Why does an even-handed, dispassionate response by the school to every such incident constitute discrimination?

If Secretary DeVos and General Sessions need any additional reason to rescind or countermand that three-year old “dear colleague” letter, however, they should consider the negative impact that its view of discipline has on schools of choice. This goes beyond matters of race and asks whether such schools will retain the right and authority to be different from other schools, to be worth attending—worth seeking out, even—because their culture, values, ambience, and the steps they take to foster seriousness, character, behavior, and safety are up to them.

Observe the recent dust-up over school suspension policies in two of the most successful charter networks in the nation’s capital. Seems they—KIPP and DC Prep—operate with broadly phrased policies that empower school leaders to suspend students whose behavior is “detrimental to” or “not in the best interests of” their schools. Any right-thinking school leader would want—and arguably needs—that kind of flexibility so that suspensions (and other forms of discipline) can be tailored and customized to take into account an array of factors regarding individual circumstances and histories, classroom conditions, and the larger school culture. But such flexibility is anathema to bean counters, activists, and over-eager politicians. Should it trigger—as one DC city council member seeks—new regulations that impose fixed external norms regarding which kinds of pupil offenses and misbehaviors—if any—warrant suspension or other disciplinary action? Whose interests are being looked after here—those of troublemakers or serious learners, of government bureaucrats or effective school leaders, of parents seeking safe learning environments for their children—or, just maybe, of those who want to besmirch and ultimately diminish D.C.’s burgeoning charter sector? (What could be better, if that is one’s intent, than to tear into some of the schools with strongest reputations and longest waiting lists?)

First, the uproar in Washington over school suspension rates was fueled in recent weeks by a new GAO report. If you look only at the report’s title, or at the headlines of articles reporting its findings, you would think the suspension problem, such as it is, is confined to charter schools. Yet as my colleague Brandon Wright recently pointed out, both D.C. charter schools and D.C. district schools had 2013–14 suspension rates that were about double the national rates. (That’s often the case in urban settings.) But the charters’ suspension rate (13.4 percent) was only slightly higher than the district rate (12.6 percent). And the charter rate was headed downward (3 percentage points lower than in 2011–12) while the district rate was level, even up a bit. Moreover, the suspension rates for black students (and youngsters with disabilities) were slightly higher in the district sector (17 percent and 25 percent respectively) than in D.C. charters (16 percent and 22 percent).

Second, check out the evidence—albeit anecdotal—that when schools ease up on swift, forceful disciplinary practices and instead put a premium on “restorative practices” and “conflict resolution,” they find themselves with declining student achievement.

Seems to me that an administration that cares about choice, about achievement, about state and local control of education, and about restoring the proper role of the federal government with regard to civil rights now has ample reason—maybe even urgent reason—to make known its views and take corrective action. Such action should both undo the direct damage that the Obama team did in these realms and—insofar as possible—also quench the spreading flames that threaten to consume far too much of what’s actually working in American K–12 education.