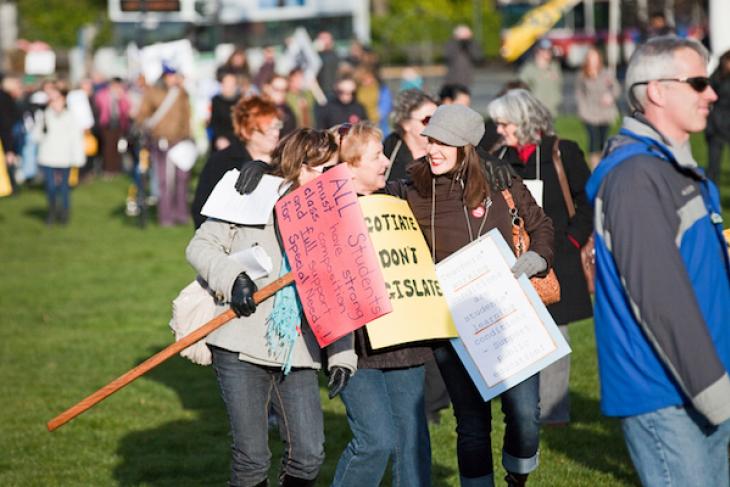 It’s hard not to sympathize with the striking teachers in several states. They’re not very well paid, inflation is creeping up, a lot of classrooms are crowded with kids and lacking in textbooks and supplies, and a number of state and local budgets for school operations are extremely tight and sometimes declining.

All that is true. It’s also true that, while U.S. kids and parents generally like and respect the teachers they know best, American schoolteachers as an occupational class don’t enjoy the status and esteem conferred upon their peers in some other countries. It’s wholly understandable that a number of them are dissatisfied with their lot. They show it in other ways besides wearing red, shutting down schools, and marching around. Particularly in schools serving disadvantaged youngsters, the places where we most need experienced teachers, there’s a great deal of turnover—both departures for less challenged schools and abandonment of the field altogether.

But several other things are also true, and they need to be kept in mind as we observe the sea of red, watch interviews with angry or teary teachers, and wonder what to do with the kids on Wednesday.

First, though state and local budgets in some places are tight because tight-fingered policymakers have cut taxes and slashed spending, in other places there’s just not as much revenue as was expected, due to slow recovery from the “great recession,” lower than anticipated economic growth—and sometimes the exit of wealthy people to places where taxes are lower! In a great many places, school budgets are tight because competing obligations to pay for non-discretionary activities are hogging more of the available money. Medicaid is a big one (and is squeezing out higher ed funding, as well), but so, too, are the pensions and associated benefits of retired public employees, many of whom are former teachers. The Pew Charitable Trusts reported two months ago that “Even states that have overcome the effects of the recession may face financial pressures that could shape their budgets now and for years to come. A number of state governments face fiscal constraints today because of inherited shortfalls, such as unfunded public pension and retiree health care liabilities that total more than $1.5 trillion nationwide, and recurring deficits between annual state revenue and expenses.” And Education Next reported in February that “pension costs, excluding Social Security and retiree health insurance, have grown from $520 per student in 2004 to $1,220 today—or from roughly 5 percent to 10 percent of current expenditures per student.”

Second, as I’ve previously noted, U.S. school systems continue to use available dollars to hire more teachers rather than paying more generous salaries to the teachers they’ve already got—which also means hiring more teachers rather than better teachers. Education Week reported last month that “Over the past two decades, the number of the teachers in U.S. schools has increased by 21 percent, while the number of students has only increased by 12 percent.” This is an old phenomenon, but it continues today, even in our era of lean budgets, with 13 percent more teachers now than four years ago but just 2 percent more pupils. That’s not true in every single state—and it’s revealing that two of the four states where student growth has outstripped teacher inflation are Oklahoma and Arizona, where recent protests by aggrieved teachers have been especially forceful. Consider the seeming paradox of classrooms overflowing (in some schools) with kids while ever more teachers are employed. But note, too, how many schools—mostly in other places—are half-empty and how many have been closed or mothballed due to declining enrollments. Chicago was down another 10,000 kids this past autumn, compared with a year earlier—and 32,000 since 2013, enough to fill fifty-three average-size schools. Though the teaching workforce often appears highly mobile, in reality Chicago teachers—with tenure, benefits, pensions, etc.—just aren’t very likely to move to Houston.

Third, while it’s true that U.S. teachers as a workforce don’t get the respect they would like—and that their counterparts enjoy in, say, Finland and Korea—this is due in no small part to the political actions and policy preferences of their own unions. By insisting on tenure after just a few years in the classroom, by protecting the jobs of even the weakest instructors, and by demanding that physical education teachers be compensated the same as physics teachers, they have fouled their own nests when it comes to status and esteem. Which also affects salaries. While it’s easy to say that dear hard-working Ms. Rosencrantz—who is hugely effective with her math students—should get paid a lot more, does lazy Mr. Guildenstern down the hall, whose pupils seems to watch a lot of movies and do poorly on the state tests, deserve the same raise?

Fourth and finally, although teachers and their representatives despise this observation and offer all manner of (unpersuasive) explanations and rationalizations, it’s still true that the typical day in American public schools lasts six or six and a half hours and there are 180 of them in a year. That’s a lot less time than is put in by most people with full-time jobs, and that discrepancy needs to be borne in mind when making salary comparisons. Yes, it’s sad that many teachers must make ends meet by taking second jobs. But it’s also sad that their school job leaves them with that extra time—and pays them accordingly. It’s not good for the kids, either.

So yes, let’s sympathize, but let’s also be hard-nosed (not hard-hearted) in understanding the circumstances and forces that have conspired to cause a bunch of unhappy teachers to take to the streets. And let’s understand that if we’re serious about ameliorating the conditions that aggrieve them, a great many things need to change in very big ways.