Should middle-class private schools be part of education reform? 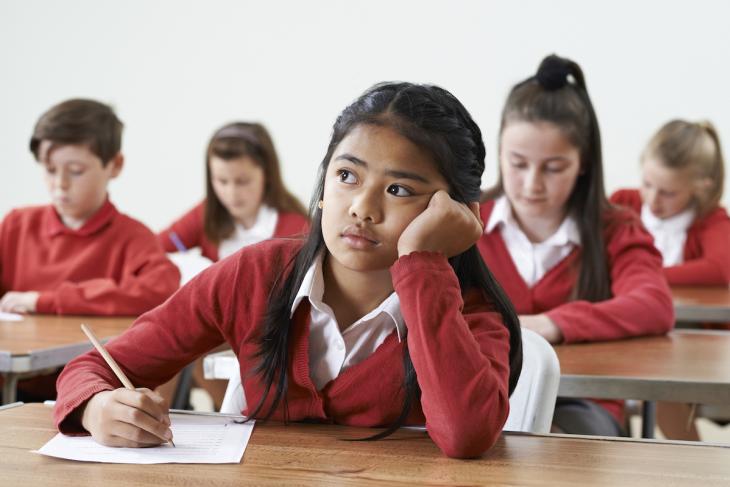 1. While the enrollment of wealthy and poor families in private schools has remained roughly constant, enrollment of middle-class families has plummeted.

This comes from a major 2018 study by scholars Richard J. Murnane and Sean F. Reardon. This graph’s red line, from their summary for Education Next, says it all.

The Atlantic’s Alia Wong, commenting on the study, wrote: “The decline of Catholic schools is making independent education less accessible to middle- and lower-class students.”

I've been part of ed reform for twenty years, and improving outcomes for low-income students is important. Scholar Jay Greene, however, rightly argues that the exclusive focus on poor students is a political mistake:

If you want to help the poor, you should design programs that include the middle and upper-middle classes.

This is the political genius of Social Security. It is extremely effective at alleviating poverty among low-income seniors because high-income seniors, who tend to be better positioned for political advocacy, also get it.

This is the political genius of many college subsidy efforts—the poor can benefit from them because wealthier families are also eligible.

3. Charter schools are a half a loaf when it comes to innovation

In 2000, I started a charter high school in Boston called Match. I felt sympathy for friends working in nearby traditional public schools. Our school had so much more freedom. For example, while other high schools were required to start at 7:20 a.m.—because of the politics around busing—we were able to start at 8:30 a.m. so teachers could have a much more productive first-period class. And seeing that teachers alone could not handle ninth grade students who arrived with fifth-grade skills, we were free to set our budget to provide for an army of full-time tutors, and less of everything else. So long as I was comparing our freedom to that of traditional schools, the glass is half full.

Over time, my perspective changed. The glass became half empty. For example, I didn’t mind the state testing, but the actual test design pushed our teachers towards suboptimal choices, particularly in English. I appreciated the intent of special education laws, but so often our teachers were doing more paperwork instead of actually sitting side-by-side with special ed students, instructing them.

Yet if anything, charters these days are becoming more regulated. The once half-full glass of charter freedom is quickly becoming one-quarter full. It may mean that some types of innovation need to increasingly come from private schools.

4. All schools struggle with segregation, public and private.

Though desegregation efforts are often imposed on unwilling public schools, private schools have a chance to be part of the solution because, if they are to combat the enrollment declines described in Murnane and Reardon’s study, they need to reach minority populations to survive.

“If private schools want to grow, reaching out to growing populations is the way to make it happen,” writes Mike McShane, “I’m heartened by efforts like Notre Dame’s Task Force on the Participation of Latino Children and Families in Catholic Schools, but we need many more organizations working to connect minority children to educational opportunities in private schools.”

So what is the main obstacle to a wave of new, non-religious, diverse private schools serving the middle class, which might unlock innovation?

Prospective founders find it almost impossible to get capital.

Here is a quick, personal case study. My friend Scott Given envisioned The Croft School, which would be a new affordable, diverse private school in Providence, Rhode Island, for middle-class families. I agreed to help him find a way to finance it. I first went to see a banker friend. I learned that banks almost never loan to start ups.

There are some extraordinary social entrepreneurs who overcome these challenges. Matt Kramer, the former co-CEO of Teach For America, leads Wildflower Schools, innovative private schools that serve a range of parent income levels, including many middle-class families. But they are wonderful outliers.

I studied other new private schools. Sometimes wealthy founders just self-fund. Laura and Jeff Sandefer (a billionaire oilman) have created the amazing Acton Academies. Obviously not many educators can check this box, however.

In the case of BASIS, it has built such a strong brand from its successful charter schools in Arizona that its leaders can raise capital even from traditional investors for their for-profit private schools. AltSchool launched several new schools in New York City and San Francisco, but capital came from investors betting on the software they would create. These are outliers.

So the options are few: friends and family. By organizing as a mission-driven for-profit, I was at least able to get some investors, people seasoned enough to know there is a decent chance they will never get paid back.

So Scott and I count ourselves as very lucky. We were able to get off the ground with our small school.

The most common story for new private school serving middle-class families, however, is my friend Alex. She has a vision for a remarkably progressive private school in Washington D.C., which would have tuition ranging from $20,000 all the way down to $2,000. But her nonprofit has peanuts in donations.

With no cash to spend, finding initial students is challenging. One needs to get parents to “cross the chasm” to start a new school. Enrollment picks up typically only after a successful first year, and only if there is great word-of-mouth from parents. You need capital for a building, to hire teachers, and to absorb first-year losses. Otherwise the new innovative school sounds a little too much like a pipe dream, and the initial parents can’t quite get there and commit.

I’m not sure exactly how to solve this capital problem. One promising new effort is the Drexel Fund; while their laudable focus is students from low-income families, the model could apply more broadly.

I do think more innovative secular private schools for middle-class families would be a good thing, less contentious than charters so long as parents are paying and vouchers aren’t involved, and possibly a way to generate some better, parent-friendly school models and build broader coalitions. These schools are definitely not “the answer,” but may be a small part of the answer.

“Private schools are not a monolith,” says Mike McShane. “They are a part of the diverse landscape of education in America, and their decline should trouble all of us.”

Mike Goldstein is a visiting scholar at the Harvard University Graduate School of Education.