A shocking college-readiness gap in the suburbs 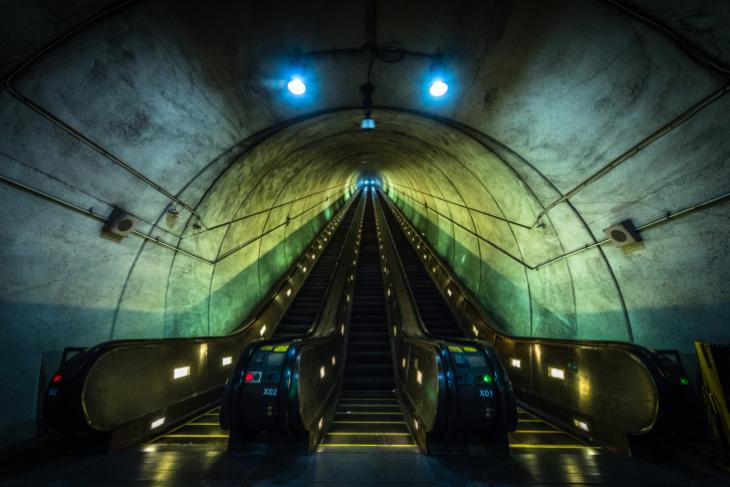 What the best and wisest parent wants for his own child, that must the community want for all its children. – John Dewey

The intuitive appeal of this oft-quoted maxim is obvious. It speaks to the conviction that all of the children in a community or a country are “our kids” and that we should want the very best for them just as we do for our own flesh and blood.

Taken literally, however, it is also problematic, for it equates “sameness” with “equity.” That’s an error in part because what “the best and wisest parents” want varies—some seek traditional schools, others favor progressive ones, etc.

But it’s also a mistake because children’s needs vary. Kids growing up in poverty and fragile families, and dysfunctional communities need a whole lot more than kids living with affluence and stability. And when it comes to their schools, poor kids may need something a whole lot different. That’s why I’m a big fan of No Excuses charter schools, which are showing great promise for low-income children—even if they might not be a good fit for many of their upper-middle class peers.

All of that’s been on my mind of late as I ponder the plight of the Montgomery County Public Schools (MCPS) outside of Washington, D.C. (My second-grade son is one of its 155,000 students.)

MCPS, to its credit, is a system that’s long been publicly committed to equity. Especially under the decade-long tenure of Jerry Weast, its hard-charging superintendent throughout the 2000s, the district, its schools, and its board were obsessed with addressing achievement gaps. It poured additional resources into its poorest schools—aimed particularly at pre-school programs and smaller classes—earning it plaudits from reform organizations and equity hawks alike.

Yet beyond these targeted investments, the MCPS strategy has been one of Deweyesque sameness. Schools throughout the County use the same curriculum and enjoy the same quality of teachers—teachers who participate in the same professional development experiences.

What’s not the same, however, are the outcomes.

Let’s allow the pictures to speak for themselves. The chart below shows the percentage of MCPS students who met the district's “college ready” benchmark on either the SAT or ACT this past year. Note that the denominator here represents those students who took at least one of those college-entrance exams. 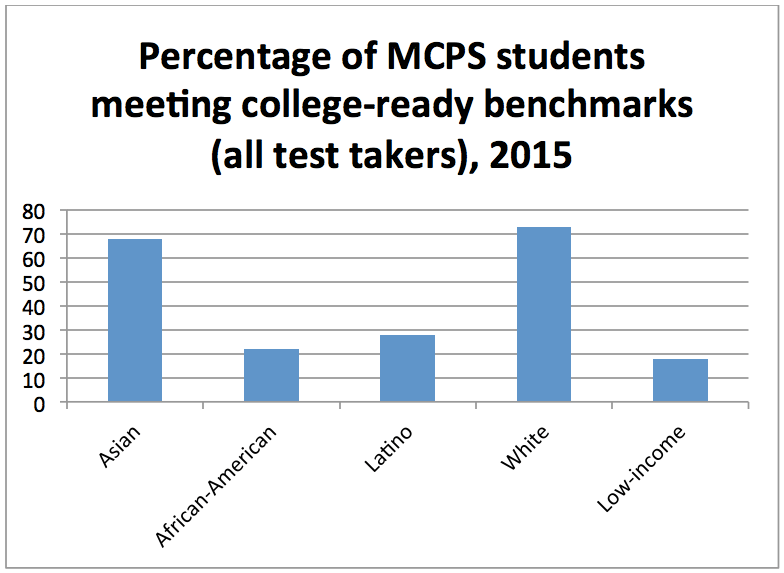 Those proportions—and gaps—are devastating enough. But not all MCPS students take the SAT or ACT; in fact, participation rates vary significantly between racial and income groups. Now let’s look at the proportions using all students as the denominator. (I’m assuming here that everyone who skipped the tests would likely fail to reach “college readiness” benchmarks. That’s probably mostly right, though not totally right. Keep that in mind.) 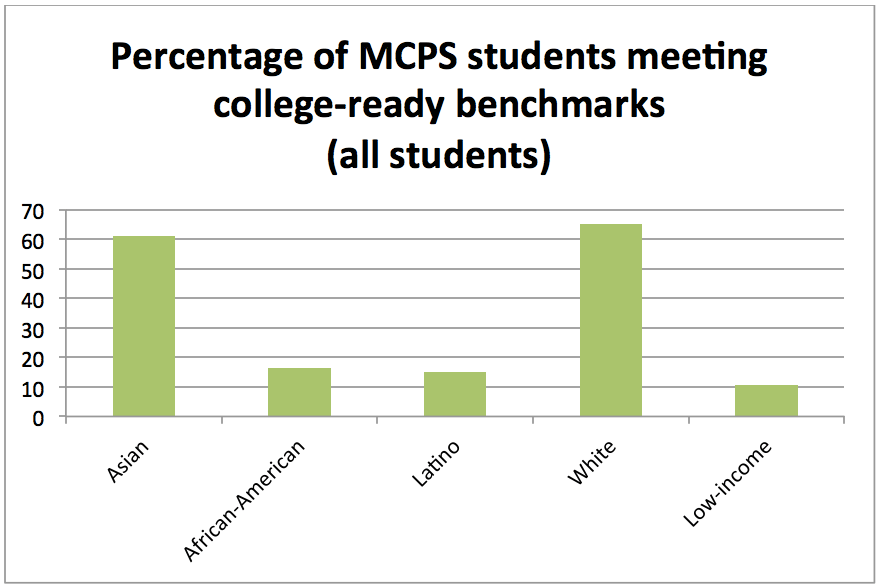 Yes, you are reading that right. Montgomery County is getting just 11 percent of its low-income students to the college-ready level, and fewer than one in five of its minority students. (Low-income students make up about a third of MCPS’s enrollment.) After all of the efforts of Jerry Weast and Joshua Starr. After spending hundreds of millions of extra dollars on pre-school, smaller classes, and all the rest. Eleven percent.

This surely explains the heart-breaking situation at Montgomery College, the county’s enterprising and generally well-regarded community college, where almost 80 percent of students coming straight from high school must take remedial math—and where more than half of students never make it past remediation.

Source: Tables A-13 and A-14, Developmental Education at Montgomery County, Office of Legislative Oversight.

To be sure, “college ready” is a high standard. The SAT, ACT, and NAEP all find that just 30–40 percent of high school graduates nationally meet that mark. And in fairness, MCPS sets an even higher standard for college readiness than the testing organizations do (1650 on the SAT versus 1550, and a 24 on the ACT).

Still, these numbers ought to be causing serious soul-searching on the MCPS school board. They ought to be dominating conversations about who should replace Starr as the next superintendent. They ought to be plastered across the Washington Post’s metro section.

The next superintendent should look at these numbers and develop an urgent and aggressive plan. He or she might start by asking: Is MCPS’s “curriculum 2.0” strong enough? Truly aligned to the Common Core? Might we learn something from the District of Columbia Public Schools and its efforts to create a robust, knowledge-rich curriculum in grades K–12? Might the county get off its high horse and invite D.C.’s best charter schools to set up shop in Langley Park or Wheaton or Gaithersburg? Are we doing enough to provide career- and technical-education opportunities to our young people, especially since we’re not doing enough to get everyone ready for college?

The search committee for the next superintendent might ask themselves: Why not try to poach Kaya Henderson from DCPS? Or Susan Schaeffler from KIPP DC? Or consider experienced reformer Jean-Claude Brizard, who lives just across the line in Northwest, D.C.?

The one thing they—and we—shouldn’t do is remain complacent.

Montgomery County deserves credit for making these data public and for its willingness to wrestle with its achievement gaps. That’s more than can be said about many suburban districts. Now it needs to take the next step and acknowledge that its low-income students may need something strikingly different than its affluent children do. It needs to reject “sameness” and strive for real equity instead. That is, of course, if it believes that many more low-income students than 11 percent could be—and should be—ready for college after thirteen years in its highly-lauded schools.