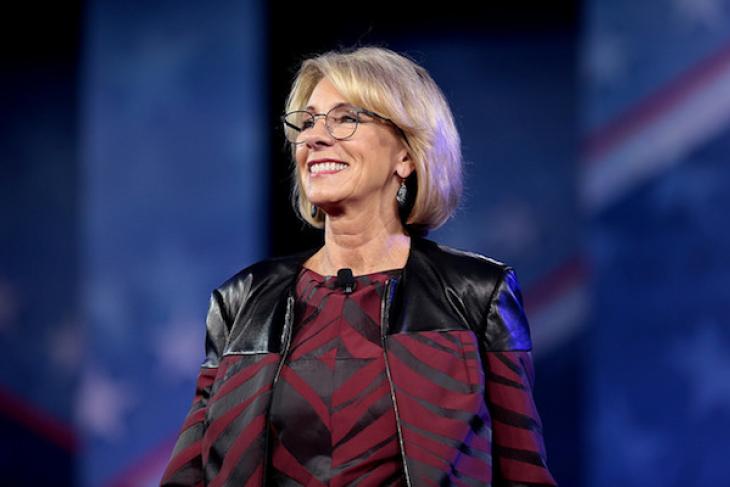 The results are in, and this time the polls were mostly right: The Republicans lost the House but strengthened their control of the Senate, setting the stage for a new chapter in our country’s uncivil war. At the state level, the Blue Ripple gave Democrats gubernatorial victories in Illinois, Michigan, and Wisconsin, though it wasn’t enough to flip Florida or Ohio.

None of this will have a huge impact on K–12 education policy, given that there’s not been much policymaking happening anyway. Yes, in combination with a red-hot economy and state finances in better shape than they’ve been in years, the shift to the left may portend greater school spending in 2019 in a few states. Otherwise expect mostly gridlock and a focus on pre-K and postsecondary education.

In Washington, vengeful Democrats are surely salivating over the chance to haul Secretary DeVos in front of multiple oversight committees, and to do that as often as possible. Congress may have forgotten how to make policy, but it adores giving grief to those who do. Here, once again, the most consequential issues relate to topics outside of elementary-secondary education, especially oversight of the student loan industry, the handling of for-profit colleges, and the right approach to sexual assault complaints on college campuses. But Democrats will want to attack DeVos on K–12 topics too, especially regarding civil rights enforcement (the treatment of transgender children and the federal role in discipline reform), but also the implementation of the Every Student Succeeds Act.

The question facing Secretary DeVos is whether to participate in these show trials. She has another option, one she has earned through her flinty resolve these past twenty-three months: She can choose to step down and gracefully exit a thankless, no-win scene.

Rumors are starting to circulate that her departure is imminent, I assume on her own volition. In my opinion, now is a good time for her to leave Washington, not just for her own blood pressure, but also for the sake of the education reform movement and her own (and the president’s) agenda at the U.S. Department of Education, which has a better chance of surviving the next two years if she passes the baton. The fact that Democrats will be disappointed if she does so tells you most of what you need to know.

No one can deny that DeVos got off to a weak start with her inadequately rehearsed confirmation hearing. Given that the Resistance chose her as the first target of its ire, forcing Vice President Pence to cast a deciding vote to make her secretary, a less resolute person might have quit before she even started. That she didn’t do so showed the grit and the commitment to better education that’s no surprise to friends and colleagues who have known her long before she came to Washington. She was made fun of on Saturday Night Live, bullied by the teachers unions, and yet she persisted.

While there’s some truth that you never get a second chance to make a good first impression, she worked hard at overcoming her bumpy start and grew into the role as secretary. She built a strong team—not an easy task in the Trump administration, or with a Senate this slow to confirm anybody—and got to work mastering the policy and politics of K–12, postsecondary, and CTE education. She made a few mistakes along the way, but for someone with little “in front of the cameras” experience, she learned fast. And most importantly, she pushed education policy in the right direction—empowering states, cutting red tape, and working to promote greater parental choice and personal responsibility.

In the court of public opinion, of course, none of this mattered because the media and the left were never going to give her a fair shake. It was too easy to play up the stereotype of a woman born to privilege—even worse, an earnest Christian conservative—to consider that she might have relevant experience from her years toiling in the school choice vineyard, her active participation in Republican politics, and her decades in the Michigan maelstroms.

Secretary DeVos may decide that, if only to spite her detractors and as a matter of personal character, she wants to serve out the remaining two years of Trump’s term. She has earned that right. But I hope she chooses otherwise. Here’s why.

First, she can take some wind out of the crazy-left’s sails by allowing someone else to make the trip to Capitol Hill for the oversight hearings that lie ahead. Chairman Bobby Scott and his colleagues will have a lot less fun—and get a lot less media—attacking someone like a Secretary Susana Martinez than they would with click-bait Secretary DeVos.

Second, she can take a talking point away from the unions and other anti-reformers by returning to private life. Politico reports that Democrats aired $3 million worth of television ads featuring DeVos—no doubt in support of candidates who despise school choice. In California, a late-hitting (and false) ad tied reform hero Marshall Tuck to DeVos. (As of publication time the race is too close to call.) Stepping out of the spotlight would be particularly beneficial to reform-minded Democrats and the prospects for reviving a more bipartisan approach to ed reform.

Secretary DeVos has proven that she’s a fighter. Now, with two years of service under her belt, and a Democratic House licking its lips, this would be more than a respectable time to step down. And those of us fighting for reforms in the trenches could use her support from the outside. (She was fantastic as head of the American Federation for Children, chair of the Philanthropy Roundtable, and so much more.)

DeVos has earned our thanks, and our respect. And if she decides to go back to Grand Rapids, she will have earned that too.