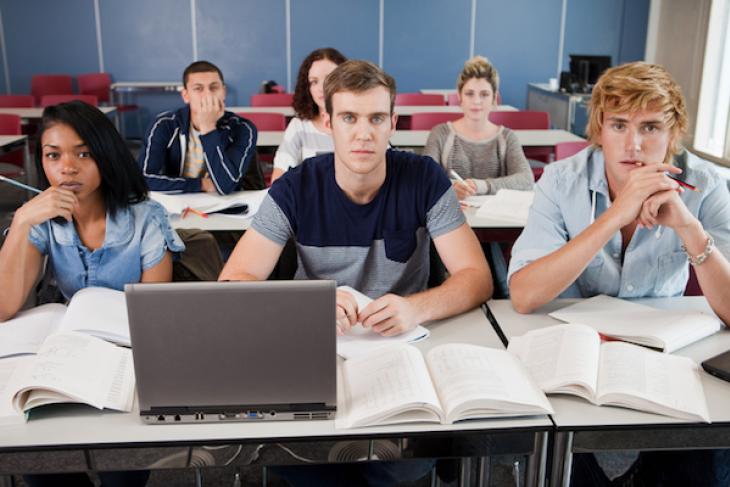 The possibility of a new federal tax credit for private-school choice has highlighted the lack of legal protections for LGBT students in school settings. This absence stands in marked contrast to the extensive legislative and judicial mandates on schooling and race, as Michael Petrilli noted recently. Each protected class of U.S. citizens—racial minorities or individuals with disabilities, for instance—has its own distinctive historical contours and interacts with education in distinctive ways. It is possible, though not easy, to create single-sex public schools or charter schools that serve autistic children, but the prohibitions on racial discrimination are absolute.

The Supreme Court did not stop with Brown v. Board of Education (1954), after all. Later rulings reinforced its principles by limiting the practices of private schools, too, even those that had made a religious-liberty case for segregation.

Significant work remains to be done to overcome residual forms of racism, but, as constitutional scholar John Inazu has put it, racial non-discrimination has become a “super-norm” no longer questioned by reasonable people.

Will non-discrimination on sexual orientation follow the same path and influence education to the same extent?

The cultural trajectory suggests that it might. While Americans disagree about whether sexual orientation is chosen or innate, whether gender is fixed or fluid, and whether same-sex marriage is acceptable or not, public opinion is broadly moving in a progressive direction, even among religious conservatives. (Note this recent Pew Research survey.) Consider the extent and pace of change: In 1972, the psychiatric diagnostic manual still listed same-sex attraction as a mental illness, but in 2015, the Supreme Court rendered marriage equality constitutional in all fifty states. Now some health insurance covers gender reassignment surgery, national organizations track laws that protect LGBT citizens, and television shows and movies reflect a variety of sexual orientations. “Heteronormativity,” a pejorative term, has entered the academic lexicon. Most public schools embrace non-discriminatory hiring policies and allow students to form LGBT support groups, and the National Association of Independent Schools expects its members to follow non-discriminatory policies on sexual orientation. The Gay, Lesbian and Straight Education Alliance’s most recent National Survey of School Climate, conducted in 2016, indicates that private, non-religious schools provide safer and more supportive school environments than do public schools, and that religious schools are more mixed but not negative.

Today’s kindergartners will not remember the myriad battles leading up to Obergefell v. Hodges (2015), but they will certainly experience sexual orientation and marriage on very different terms than have Baby Boomers or even Gen X-ers. Maryland’s small private-school scholarship program, enacted in 2016, forbids participating schools from using sexual orientation as an admissions criterion. Given this pace of change, it is reasonable to expect an incremental shift towards non-discrimination in all school settings.

LGBT advocates and activists may note that the racial desegregation of schools ultimately rested upon the Supreme Court’s intervention against the principles of federalism and religious liberty. They can certainly push for changes to state statutes and constitutions, as Dick Komer of the Institute for Justice noted recently. The same is possible at the federal level. But, as I suggest elsewhere, the Brown precedent could point to another legal strategy: the categorical-psychological-harm threshold.

In the decade before Brown, psychologists Mamie and Kenneth Clark had found in multiple trials that black children chose to play with white dolls over black dolls and that they associated positive attributes with white dolls but not with black dolls. The Clarks interpreted this as evidence that black children had internalized “negative self-regard” from a segregated society.

The Clarks served as expert witnesses in the school-segregation cases that led to Brown  (1954), in which unanimous decision Chief Justice Earl Warren elaborated upon psychological harm:

To separate them [Black children] from others of similar age and qualifications solely because of their race generates a feeling of inferiority as to their status in the community that may affect their hearts and minds in a way unlikely ever to be undone. The effect of this separation on their educational opportunities was well stated by a finding in the Kansas case by a court which nevertheless felt compelled to rule against the negro plaintiffs: Segregation of white and colored children in public schools has a detrimental effect upon the colored children. The impact is greater when it has the sanction of the law, for the policy of separating the races is usually interpreted as denoting the inferiority of the negro group. A sense of inferiority affects the motivation of a child to learn. Segregation with the sanction of law, therefore, has a tendency to [retard] the educational and mental development of negro children and to deprive them of some of the benefits they would receive in a racial[ly] integrated school system.

The Court therefore held that racial segregation was inherently damaging academically as well as psychologically to an entire group of children.

Note that the Court’s threshold for federal interference was not whether any school activity potentially harmed any individual student, but whether a school or school system inherently and inevitably harmed entire categories of students. It’s no secret that exposure to contrary beliefs and practices can be distressing to individuals. Yet democratic culture is predicated upon, and citizenship advanced by, exposure to contrary beliefs.

In Brown, the Court determined that race belonged in an entirely different domain: The consequences of being a racial minority should be subject neither to individual beliefs nor to variations in state laws. Evidence of psychological harm helped the justices arrive there.

What if a robust body of research found that heteronormative schooling inevitably damaged children who were not heterosexual, or children whose parents were not heterosexual? One can imagine a Brown-like moment at the Supreme Court. The consequences for education policy might be to withdraw funding, and possibly even tax-exempt status, from private schools whose hiring, admissions, and retention policies discriminated on the basis of sexual orientation. Neither the federalist principle nor the religious liberty argument would override this determination.

Scholars have long argued about the validity of the dolls test, contending that Kenneth Clark’s depiction of the findings was selective and therefore “misled the courts”; that dolls tests, properly administered, produce considerably more nuanced results; and that the dolls test itself reflected a flawed, post-World-War II vision of racial identity. The trustworthiness of social scientific research more generally is also open to debate. In a widely noticed August 2015 article, Science Magazine reported on “a painstaking yearlong effort to reproduce one-hundred research projects” that had appeared in peer-reviewed journals. The analysts who repeated the psychological studies found that only 36 percent of their efforts yielded significant findings, versus 97 percent of the original studies. Clearly, the standard for research findings to serve as the basis for public policy should be high and should rest, at minimum, upon replication in multiple contexts.

Educational pluralism inevitably involves accepting—and funding—schools that we wouldn’t choose for our own children. Secularists think religious schools perpetuate mythology; Evangelicals feel the same way about district schools; Waldorf schools, with their utter rejection of commercialism, appeal to a particular subset of American families; progressive parents look askance at traditionalist pedagogies; Jewish day schools differ appreciably from one another. Nor is this sort of variability—of approach, of belief, and of attitude—limited to education. Taxpayers in democracies end up supporting wars, economic policies, and social programs that they do not endorse.

Educationally plural democracies crossed that bridge a long time ago, having concluded that funding diverse types of schools benefits the body politic more than uniformity. At the same time, however, a democratic nation will—and indeed must—wrestle with the limits of freedom. Categorical psychological harm might provide a federal foundation upon which to foreclose schools’ right to discriminate on the basis of sexual orientation.

Ashley Berner is deputy director of the Johns Hopkins Institute for Education Policy and assistant professor at the School of Education. Palgrave Macmillan released her book, Pluralism and American Education: No One Way to School, last November.