In praise of PBS Kids

Regular readers know that I’m a father of two young boys—and that my adventures in parenthood have changed more than a few of my views on education reform. (This appears to be a common experience among policy wonks.) Well, here’s another shift: I used to agree with George Will and other small-government conservatives that Uncle Sam has no business subsidizing children’s television on PBS. But no longer. If anything, I’ve come to believe that is a sweet spot for federal involvement in education.

Will’s argument is straightforward: The market is more than capable of providing children’s programming on its own—just look at Nickelodeon and the Disney Channel. But there’s the rub: Stack those commercial stations up against PBS Kids and there’s no contest when it comes to academic content and quality. Nick Jr. and Disney Jr. offer mostly burgers and fries; PBS provides a tasty spinach salad.

The best PBS shows in my view—and my elder son’s!—actually teach something. Not something vague like “reasoning skills” but something concrete like science! Yes, his favorite shows are Sid the Science Kid and Wild Kratts, a very clever program about wildlife. At four and a half, he can’t read yet, but he can learn a ton about our world—and with his curiosity on overdrive, he’s eager to learn and learn and learn.

Other PBS shows are strong on content knowledge too, especially Dinosaur Trains and The Cat in the Hat Knows a Lot about That. Others focus on teaching decoding and comprehension strategies—these stem from the early 2000s and reflect the Bush administration’s obsession with early reading—namely Word World, Super Why, and Word Girl. And the line-up is rounded out with several pleasant if content-free offerings that aim to teach character and the like (Arthur, Caillou, Clifford, and so forth). 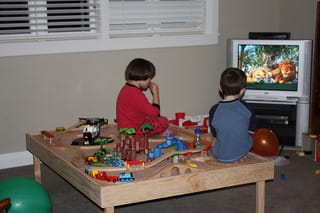 Contrast that with Nick Jr. and Disney Jr. Yes, there are a few decent offerings. The Backyardigans, on Nick Jr., is brilliant; it features cute animated characters dancing and singing in beautiful fashion. A friend tells me that Disney’s Gaspard and Lisa is fabulous and packed with great vocabulary. Nickelodeon’s Blue’s Clues was also a landmark show, educationally speaking.  But Nick is also responsible for the poisonous Sponge Bob Square Pants and the hugely annoying Dora the Explorer—the crack cocaine of children’s television. (If you don’t know what I mean, you don’t have a toddler in your house.)

Back to the role of government. The reason the PBS shows are more educationally sound is that one of their major investors—Uncle Sam—demands that they be so. The Department of Education’s Ready to Learn program provides upwards of $30 million a year to develop high-quality programs, as well as related content (web sites, games, etc.). Unlike most federal initiatives—which must work through the states, local school districts, and local schools before getting to actual kids—this one has a much shorter line to the end product: Good stuff for kids to watch. It’s an easy way for the federal government to make a positive contribution.