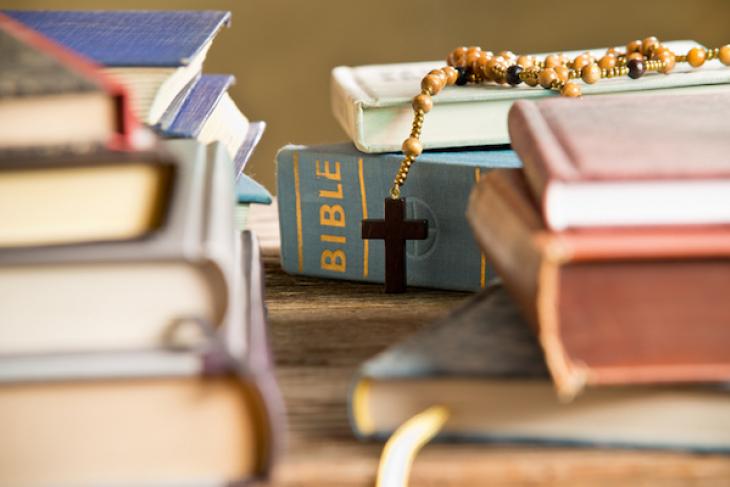 John Joseph Hughes was a feisty Irish immigrant who became the first Catholic Archbishop of New York. If you have seen the film “Gangs of New York,” you have a sense of the city in which he charted a course for the Catholic church, with the explicit purpose of helping immigrants find their way in their new home.

I say “feisty” because, like many of the scrappy Catholic school teachers and leaders we work with today, he was exactly that. One account described Dagger John as: “Unsystematic, disorganized, impulsively charitable, unable to keep his checkbook balanced, vain enough to wear a toupee over his baldness, and combative.” He became “the best known, if not exactly the best loved, Catholic bishop in the country."

Yet, Archbishop Hughes’s “dagger” was not only his sharp personality, but also his unwavering belief in the transformative power of Catholic schools. He faced fights from the legislature, from “nativist” mobs who attacked him and ransacked his home. But he always stayed true to his belief that Catholic schools could change history—particularly for the immigrant communities they grew to serve.

New York City’s Partnerships Schools (PNYC), the network of Catholic Schools I have the honor to lead as superintendent, strive to walk along the path Dagger John forged. We are equally unwavering in our belief that Catholic schools have the power to change history today, just as they did more than 150 years ago when they were created. Yet, this era is different. Today, the legislatures aren’t the ones trying to close us, but others are trying to outcompete us. The environment is cutthroat, and we have to fight for what we’ve got. And the rules aren’t always fair.

But we have the unique opportunity to show everyone who’s ready to eulogize Catholic schools that they’re wrong to underestimate the power and potential of faith and values in an era of increased competition and academic rigor.

And this year at PNYC, our scrappy band of troublemaking leaders is celebrating its fifth year as a trailblazing network of high performing, faith-filled urban Catholic schools. We aim not for comfortable conversations about the decline of Catholic education in America but to shake the world awake to the possibility for a thriving system of schools in this new century.

As we launch our fifth year together as a network, we are reflecting on the performance of our schools, the community we are building, the need for perseverance in the face of setbacks and possibility for truly breakthrough results.

In 2014, our schools lagged significantly behind their charter and public school peers when it came to achievement on the New York State test. After three straight years of achievement gains, our school’s ELA results are on par with or better than all but a few of the city’s highest performing charter networks. 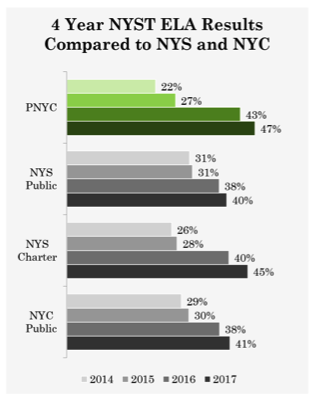 What’s more, our network-wide achievement in both ELA and math has jumped 25 percentage points since 2014. And that means that our students are now beating the average state, city, and New York charter school averages in both core content areas. 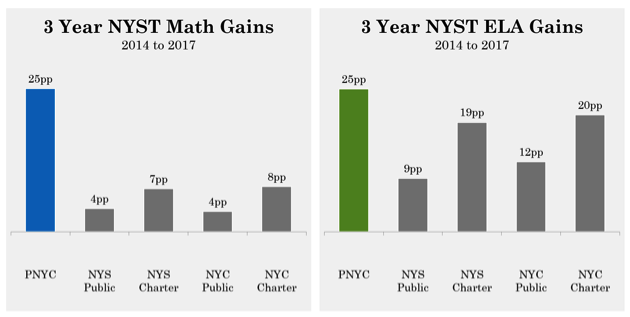 While these gains are exciting, they are not what make me most proud and energized about our work. At the end of last year, we began to track our progress across a host of indicators that matter most to us—things like Catholic identity, community, character, and more. We found that fully 95 percent of our teachers and leaders believe that our core values drive everything we do, feel that our schools emphasize the importance of religious instruction and faith formation, and look forward to coming to school each day.

Anyone who has ever been to one of our schools can attest to this. Last year, we had a high performing leader from Success Academy visit one of our schools. At the end of her visit, she turned to Kathleen Quirk, our chief of staff, and said, “your schools are magical.” (I hasten to add: That leader joined our team as an academic dean the same day.)

She’s right, too. There is a magic that happens when you weave together faith, a relentless focus on academic excellence, and an unapologetic focus on character- and values-driven education. And we are confident that our faith, the strength of our communities, and the warmth and love our students feel each day change their lives at least as much as the academic work we do. Probably more.

At the same time, we can always do more. Even this year, while we had much to celebrate, we see areas for growth. Our scores dipped slightly in math. We value all of this information—the good and the bad. Because we understand that we see our students better and we can serve them better when we know where they are across a host of indicators.

And this year more than ever, our schools and this network exists to help say: Not on our watch.

As we embark on our fifth—perhaps our most important year—we draw a lesson from Samuel Pierpont Langley.

Few people know Langley’s story—I didn’t until recently. Langley was a scientist who wanted to invent a “flying machine.” And he had every advantage. He was given $50,000 by the War Department to support his work. He was a professor at Harvard, and he worked at the Smithsonian. He had the wherewithal to find and hire the “best” minds that money could find.

That is to say: Langley was well set up for success. In fact, people were so convinced he was going to succeed that the New York Times followed him around to document what they thought was history in the making. But, with every advantage money and influence could buy, why have none of us heard of Langley?

It’s because at the same time, a much smaller and scrappier effort was underway in Dayton, Ohio, where two brothers—owners of a local bicycle shop—were pursuing the same goal. They had none of the advantages Langley had. They had no money except what they earned at the bike shop. Nobody on their team had even a college degree. And the New York Times never followed them anywhere. Nobody thought they were making history.

Instead, they had the unwavering belief that they would succeed. And with that, they attracted a scrappy team who was just as crazy as they were. Every time they left for work in the morning, they had to take five sets of parts with them. Because that’s how many times they would crash each day before dinner. But the crashes didn’t stop them; they did take flight on December 17, 1903. And while no one was there to experience it, everyone knows that this scrappy band of misfits changed history.

And do you know what Langley did when he found out? He quit. That’s how little he believed in what he was doing.

And so, as I look at the ups and downs I know we’ll face over the years, I don’t worry. Those crashes are just opportunities to learn and grow.

Instead, I remember what we’re here for.

We are here because we believe that the Catholic church in general and Catholic schools in particular have been one of the single most important poverty elimination programs in the history of our nation. We are here because we believe that students are best served in an environment where you can unapologetically weave together faith, academic excellence, and service to form students into young men and women for others.

And we are here because we stand on the shoulders of the giants who have come before us—leaders who overcame serious obstacles because they had an unwavering belief in the transformative power of Catholic schools.

And those founders faced at least as many challenges as we do now. Such was the faith and the hubris of our founders. We have the privilege of teaching kids in schools that wouldn’t exist if it weren’t for them.

And so, when I think about where we have to go—the obstacles I know we face and the very real challenge to demonstrate learning dramatic learning gains that are worthy of the students we serve, I can’t help but be inspired by the scrappy and daring founders of our network of schools. As everyone else follows our charter peers around the way the New York Times followed Langley, I can’t help but smile. Because in our age, as in Dagger John’s, we know the future of Catholic education is the future of the Church. And that belief will power us forward until this new era of Catholic education takes flight.

Kathleen Porter-Magee is the Superintendent and Chief Academic Officer of Partnership Schools.