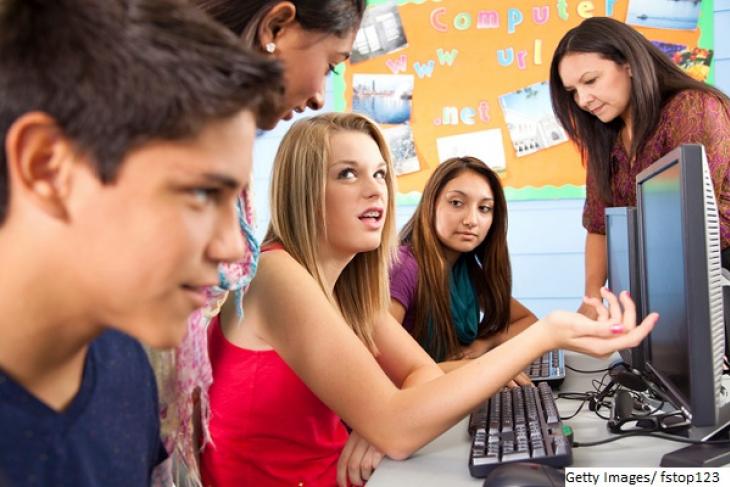 In October, President Obama announced that the national high school graduation rate had reached an all-time high in 2015. Yet that same year, the percentage of high school seniors ready for college-level reading and math declined to 37 percent. In other words, as graduation rates rise, other metrics of student achievement are falling, raising questions about how schools are getting more students to graduate. One answer could be the widespread but questionable use of online credit recovery courses (OCRCs).

Students can enroll in OCRCs to earn credits in courses they’ve previously failed. They’re often administered by private companies that contract with school districts. National enrollment statistics are unavailable, but according to the International Association for K–12 Online Learning (iNACOL), more than 75 percent of U.S. school districts use online learning for expanded course offerings and credit recovery. In Georgia, for instance, approximately 20,700 OCRCs were taken in 2016. And the Los Angeles Unified School District recently credited its highest ever graduation rate to the use of these courses.

One of the biggest red flags about this method of remediation is that passage rates don’t match achievement data. For example, the Atlanta Journal-Constitution recently reported that only 10 percent of OCRC students were proficient on Georgia state exams in 2015 and 2016, yet a whopping 90 percent earned credit.

My personal experience overseeing OCRCs showed me how this is possible—and it ain’t pretty.

From 2011–15, I worked in a school district in Douglas County, Georgia, just west of Atlanta. During that time, it saw a 13 percent increase in graduation rate in 2015—including a Title I school that increased by 26 percent—despite no meaningful gains in student achievement. In fact, the percentage of our graduates taking remedial courses in college rose.

My training for my role as an OCRC classroom manager comprised one class period, during which a colleague—a physical education teacher and football coach, who also oversaw OCRCs—taught me how to “unlock” multiple-choice quizzes that students took after completing lessons. I was told that my main goal was “to make sure the students have at least an 80 percent average so that if they fail their standardized course tests they will still get credit and graduate." In other words, teachers were trained how to manage the program in such a way as to guarantee that students at least made a B.

This was accomplished primarily by giving students as many attempts on multiple-choice quizzes and tests as needed for students to maintain a B average. Because these additional attempts contained many of the same questions (and answer choices in the same order), students were able to score higher on each attempt by process of elimination and guessing.

The teachers further increased the odds of students guessing correctly by giving “answer checks.” Here’s how it worked: When students finished the first attempt on a quiz or test, they call upon the teacher for a “check.” He or she pulls up the student's answers, reviews them, and informs the student which questions are incorrect. The student then changes his or her answers before submitting the assessment for a grade. In spite of this opportunity to change wrong answers, failure on the first attempt was common.

Because students got these answer checks and could retake quizzes as many times as necessary, most didn’t pay attention to the lessons—and therefore didn’t learn the content. Instead, they were permitted to socialize, play video games on the Internet, and fiddle with their phones. Early on, after stopping answer checks, requiring students to seek my help after failing two attempts, and capping the total attempts at three, students resisted. I tried, for example, to help a student after he failed the second attempt on a biology quiz. “It doesn't matter, I just guessed on all of it,” he said. When I asked if that was what he’s been doing throughout the course, he replied, shrugging his shoulders, “Of course, what's wrong with that?” Another student, after failing two quizzes on the fourteenth amendment, angrily objected to taking more notes before getting the third attempt, adding “I would pay attention if this were a legitimate course!”

After assisting my trainer for a few weeks, I oversaw an OCRC for one semester, and decided to document what I witnessed. Through this I gained leverage with the district administration to institute reforms. Consequently, the district eliminated the answer-check practice, along with other abuses. But even after those improvements, problems with OCRCs in our district remain, such as the lack of access to certified teachers.

My experience, albeit anecdotal, demonstrates how perverse incentives and misplaced priorities can lead to higher graduation rates with little or no additional learning. Given how widespread online credit recovery courses are, and the recent evidence that they often yield very little benefit in the way of actual learning, states and districts ought to take a closer look at their offerings to ensure that the students they serve get the help they need to be successful adults after graduation. A diploma is of little value if the recipient didn’t develop the necessary skills and confidence to be a productive member of society. And, sadly, districts like the one in which I taught are failing the very young people that depend on them most.

Jeremy Noonan is a certified science instructor in Georgia and has taught for ten years in public school, private school, and home school cooperatives. He also runs Citizens for Excellence in Public Schools, a local education advocacy group.