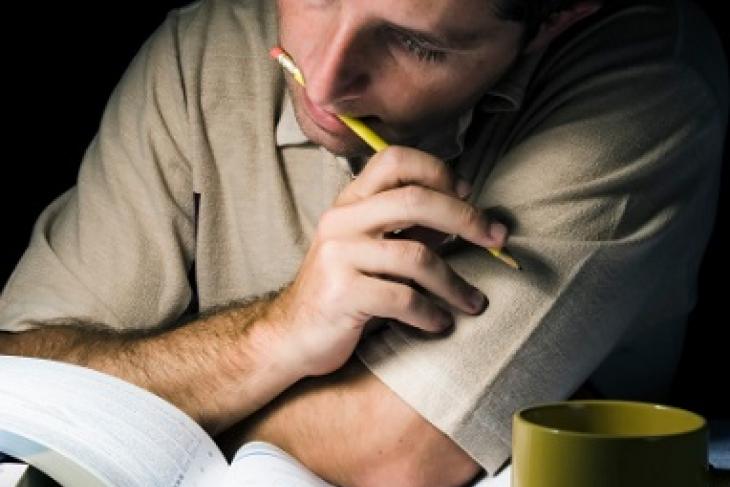 One of my favorite pieces of writing is four sentences long. It’s the statement General Dwight Eisenhower drafted in the event D-Day ended in defeat:

Our landings in the Cherbourg-Havre area have failed to gain a satisfactory foothold and I have withdrawn the troops. My decision to attack at this time and place was based upon the best information available. The troops, the air, and the Navy did all that bravery and devotion to duty could do. If any blame or fault attaches to the attempt it is mine alone.

This noble declaration came to mind as I studied for the exams to become an elementary teacher in Massachusetts. I wondered how I should explain if I did not pass. And I still do, because I won’t learn until March 18.

You may be wondering how delusional one must be to compare failing a test to failing to liberate Western Europe. I think what you’re really asking, though, is an estimation question, and the answer would be best expressed using scientific notation. Hitting the books has hugely improved my math skills, you see.

Having been credentialed as an elementary teacher already—years ago, in a neighboring state I will identify only by indicating that it has the most loathsome baseball team imaginable—I figured that doing so here would be an annoyance, but not especially challenging. Truth be told, I felt kind of like one of those drivers obliged, through some bureaucratic misfortune, to retake the road test.

My stars, was I wrong. And you know what else I was wrong about? About half the answers on my first practice math test. I was expecting “Pick out the rhombus!” and “Do the times tables up to thirteen!” Nope. See for yourself. Questions 20 and 36, for example, gave me a bit of a workout.

Of course, I shouldn’t presume that my ignorance is also yours; maybe you solved them straightaway. But that was just the math. How about this: Why would some cells have more mitochondria than others? As someone who last studied biology when Michael Dukakis was running for president, I basically had to relearn the subject. And a whole lot of other stuff as well.

With the help of knowledgeable friends, hours of study, and a kind and patient man named Sal Khan, I got better at the sample tests. But it was humbling. If you factor in my two graduate degrees, my fifteen-year teaching career, and the fact that I’ve written disparagingly about teacher preparation standards in these very pages, my humbling was squared (or cubed, or something).

And now follows perhaps the strangest sentence I have ever penned: I am grateful to the Massachusetts Tests for Educator Licensure, for I see the world anew.

Before, I just noticed clouds; now, I can tell a cirrus from a stratonimbus. Last week, I used the term “Brownian motion” to describe my daughter’s itinerant slumber in her toy-strewn crib. I didn't use to talk like that. I mean, until fairly recently I wouldn’t have been able to explain, apart from the spelling, any important distinction between the eukaryote and the ukulele. These days I regard cells with something approaching holy awe.

When I’d mention to people that I was studying for the elementary certification tests, and that the math one in particular was pretty tough, I’d get a certain kind of look. It was invariably sympathetic, but often perceptibly patronizing as well. It was probably like the look my friend Nick would get when he’d say he was studying for his first driver's license. Nick, a fellow teacher, was in his thirties at the time. (He was living in New York City and half-French, so I’ll leave you to estimate how much of the weirdness to discount. Or, who knows, cube.)

Nick and I once traveled to Normandy to see the beaches where bravery and devotion to duty proved triumphant. It’s something I’ll never forget. Nor have I ever forgotten something Nick told me about education in France, where he did his schooling: “In America, you can be considered smart even if you’re bad at math,” he said. “It’s not like that in France.”

I’m hoping that my results permit me to avoid being affirmed stupide by our oldest ally. Either way, studying for these exams has retrieved forgotten knowledge, illuminated horizons of ignorance, and propelled my own education. I know I’m a teacher and all, so I’d probably say something like this about learning anyway, but let me again declare my gratitude.

And if I fail? Then I wish to declare—with my humility cubed, or worse—that any blame or fault attaches to poorly worded questions.

Peter Sipe has spent most of his career teaching middle school English. He’s thinking about returning to elementary school. See his previous Flypaper editorials, "At ed schools, a low degree of difficulty,” "How to challenge voracious young readers," and “Finding life lessons for students on the obituary page.”