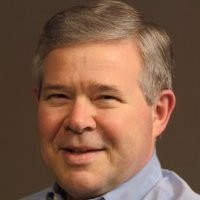 Several people I admire have recently passed away (Bob Dole, Colin Powell, Fred Hiatt, Stephen Sondheim…), but the only one in that group who was also a close friend is Denis Doyle, who died at eighty-one on December 2 in Los Angeles, his home in recent years.

Denis and his late wife Gloria returned to their native state late in life to be near their children and grandchildren and because the indomitable Gloria needed more medical attention and personal help. It was the right move, and they were spectacularly well looked after as Gloria grew weaker and Denis acquired health challenges of his own.

I had the opportunity to visit a couple of times, including shortly before the Covid-19 plague shut everyone down. Denis was physically diminished but sharp, affable and curious as ever. Our real relationship, though, was in Washington, where for decades Denis and Gloria and Renu and I lived a couple of miles apart. It was both a professional and social connection. Our kids attended the same school. We dined together a hundred times. We had many mutual friends. Renu was occasionally able to offer medical suggestions, and I lapped up the recipes in Gloria’s self-published cookbooks.

Gloria Revilla Doyle, it must be noted, was one of the most remarkable people I have known. Despite a degenerative situation that left her a quadriplegic for decades, she was so much more than plucky and determined. She was regal and commanding, inquisitive, generous, and kindly, pursuing a wide range of interests with a wide range of friends—and expertly hosting many of us—with nary a “woe is me,” at least none that we ever heard.

And Denis was always there, even while maintaining his own busy and productive professional life, unfailingly supportive, patient, loving, and accommodating, both in suburban D.C. and later in the City of Angels.

Denis’s professional life was, of course, spent in the education realm, where we first intersected and bonded, not just because we agreed on so much, but also because we stimulated each other and on multiple occasions were able to collaborate, including co-authored pieces that sometimes gored ungrateful oxen.

Denis started his career as a staffer to the California legislature, then came to Washington to work at the Office of Economic Opportunity and National Institute of Education (antecedent to IES), where he played a large role in early school-voucher experiments. Post-government, Denis was connected to several eminent think tanks and was a prolific author, pundit, and scholar under their auspices and as an independent consultant. He remained passionate about school choice, particularly as a necessary strategy to help needy kids otherwise stuck in dire schools. He hated the hypocrisy of those who opposed choice for others while availing themselves of it for their own kids. But he was no “silver bullet” reformer. He had plenty of ammunition—and plenty of targets. He served on the National Commission on Time and Learning. While at AEI, he (and Terry Hartle) wrote incisively about the strengths and weaknesses of state education agencies. He penned a trenchant comparison of the U.S. and Japanese education systems. Possibly his most influential work, coauthored with the late David Kearns, was Winning the Brain Race: A Bold Plan to Make Our Schools Competitive.

Later in his career, Denis and a couple of colleagues launched a successful educational technology firm called SchoolNet.

His influence was felt far and wide, not just through his scholarship and commentary, but also through his impact on others. As Andy noted, “[U]pon his passing, it was noteworthy the number of people who said things like, ‘a real mentor to me.’” And as Leslye Arsht and Sue Pimentel wrote, “Denis brought a unique mix of expertise and common sense, confidence and curiosity, and understanding and good humor to charged and complex arenas. He was one of a kind and will be missed.”

Denis was fun, too. A teller of stories, a connoisseur of fine food and drink, a gracious and open-handed host, a genial companion, and the owner of a grand sense of humor. It would have been hard not to be his friend.

I’m privileged to have known and worked with him. But more than that, I loved the guy.