Last month, the Center for Research on Educational Options (CREDO) at Stanford University released a new analysis of the performance of charter management networks, entities that may be engaged to oversee the day-to-day operations of a charter school. (See here for a short review of the report.) As in past CREDO studies, the results showed wide variations in performance depending on several indicators: network type, state, demographics, years spent in charters by pupils, etc.

Despite dozens of analyses and myriad ways to parse the CREDO data, most of the buzz around this study has focused on the analysis of network type, by profit status. Here are four takeaways that venture beyond the flashy headlines.

1) The for-profit versus non-profit discussion needs lots of nuance. CREDO’s comparison of charters based on the profit status of their operators snatched many of the headlines. This was unsurprising, given the current political milieu and much larger rifts within the charter coalition, where “profit” seems to be playing proxy for other issues. Still, it’s simplistic at best and misleading at worst to say—as EdWeek did—“for-profit charter schools show poor academic growth.” In comparison to their nonprofit counterparts, schools overseen by for-profit firms did underperform slightly in both subjects.

Figure 1: Impact of Attending a Nonprofit or For-Profit Charter School, Math and Reading 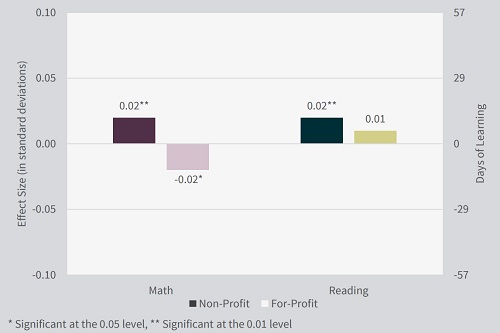 Figure 22 in the report

But CREDO’s analysis included large virtual schools—nearly all of which are managed by for-profit companies. Given the well-documented weakness of virtual charters, this finding is no shocker.[1] A more useful comparison would have removed the virtual schools and asked how brick-and-mortar schools managed by for-profit entities compared to those operated by nonprofits.

Note, too, that pupil performance among for-profit-managed charter schools was no different than traditional public school performance in reading, and six days per annum less in math—not exactly earth-shattering given the inclusion of large virtual charters. The report’s breakout of charter operators at the end also illustrates that some for-profit networks had positive gains—including one of Ohio’s highest performers (National Heritage Academies). As Andy Rotherham elucidated in a recent US News column, “any outright ban on for-profits would not only clean up bad actors; it would also take away an option that is working for some families. And that’s why this debate is not as simple or straightforward as many advocates make it out to be.”

2) Consistent enrollment matters. CREDO found, unsurprisingly, that the longer a child was enrolled in a charter school, the stronger gains she realized relative to peers in traditional public schools. This was true for all types of charters studied. CREDO researchers categorized charters into four groups: independent (standalone) charters; those overseen by a charter management organization (CMO)—for purposes of this study, this could be for-profit or non-profit[2]; vender-operated schools (VOSs)—those that provide services under contract to at least three charters but do not “hold the charter;” and hybrids, which for purposes of this report was a small grouping of companies that had aspects of both a CMO and a VOS.

For students attending CMO-run charters, results actually flipped from negative during the first year of enrollment to positive the second and third years. By year 3, those kids attained an extra 40 days of learning in reading and 46 days in math. Figures 1 and 2 show steady, upward gains the longer students are enrolled in nearly any type of charter.

Figure 2: Annual Growth Rates Based on Years in Charter by Charter Sector, Reading

Figure 15 in the report

Figure 3: Annual Growth Rates Based on Years in Charter by Charter Sector, Math

This study affirms that kids benefit more when they utilize choice and then enroll consistently. This is true not just for charter students: A recent Fordham study on interdistrict open enrollment found small but positive gains for students who open enrolled for multiple years. Recent analyses of voucher programs also show that kids who consistently attend private schools make up ground after an initial dip in achievement.

While the reasons for student mobility are complex and often outside the school’s capacity to affect, education policy can make a difference. Charter schools in some communities have the benefit of allowing students to enroll from anywhere. More traditional public schools should consider the same; if nothing else, they could allow limited open enrollment for students who move outside district bounds and want to remain in their former school. There’s also room to start or strengthen grassroots advocacy groups that help counsel families in school decision-making and improve the odds of a good school fit.

3) Charters work especially well for historically underserved students. Like past studies, this analysis finds that students in poverty as well as black and non-ELL Hispanic students fare especially well in charter schools. Readers should understand CREDO’s methodology, which “matches” charter students to traditional public school (TPS) students who are like them in observable ways: (e.g. a low-income, African-American fourth-grader in a charter school without a disability who scored in the 30th percentile is matched to a “virtual twin” in a TPS). By controlling for these variables, CREDO makes an impressively close apples-to-apples comparison, given the data at hand. These findings are more robust statistically than a simple comparison of charter schools to their nearest traditional neighborhood schools, which may have fundamentally different student populations.

Any school or strategy that enables our poorest children to achieve at high levels deserves our fullest support. There is nothing more deserving of bi-partisan support than high-quality educational options that successfully propel our most underserved kids into lives of greater opportunity. This isn’t theoretical; good charter networks are producing outstanding gains for poor kids. Sometimes, these very same networks are facing political opposition to their expansion—a discouraging but necessary reminder that even when the data are clear cut, political power brokering and posturing can stand in the way.

4) Tightening charter oversight and reining in bad actors can only get us so far. CREDO breaks out results by charter operator, and finds that the less effective ones “often serve as many or more students than the high-achieving networks.” CREDO rightly asks, “Why are charter schools with weak academic track records allowed to replicate? Why are some networks with terrible average growth allowed to continue to operate multiple schools?” The authors go on to identify the importance of quality authorizing and the impact of state policies on charter practices and oversight.

As Ohio has learned the hard way, sound charter oversight matters greatly. It is much harder to tighten up or fix later than it is to get it right at the outset. Strengthening charter oversight policies and ensuring that vetting of new schools is rigorous can prevent some of the damage done by large, ineffective networks. It can curb the replication of schools that aren’t helping students toward proficiency and graduation, and it can mitigate the reputational damage done to the charter movement.

Still, strong oversight is not enough to create a vibrant charter movement. These schools also need sufficient resources—funding, facilities, top-notch human capital—in order to truly thrive. Mindful that such investments matter, CREDO analyzed results for schools funded by the Charter School Growth Fund, a national nonprofit that invests in charter networks that are already excelling, helping them to reach greater scale. Non-CSGF schools are represented by the black bars in Figure 4; CSGF schools are the pink and yellow bars. 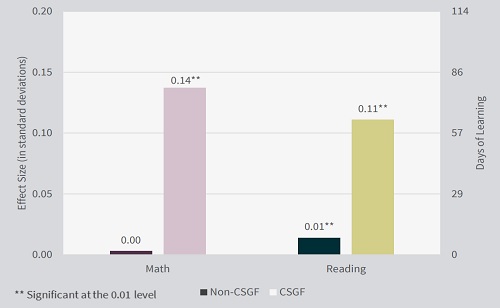 The differences are staggering: the equivalent of 80 days of learning in math and 57 days in reading. To be fair, CSGF has a rigorous vetting process, which itself likely predicts these networks’ success. But the important finding here is that CSGF enables already excelling networks to expand further. Such investments are essential to growth, be it from CSGF, federal Charter School Program grants, or generous state (or local) funds that bring charter funding closer to parity with their traditional counterparts.

On balance, the latest CREDO analysis reminds us that discussions about charter school performance are far more nuanced than the average headlines would have us believe. This study makes clear that just like schools, not all management companies are created equally, but having a great one can have a real impact on student outcomes. Of course, folks bent on opposing charters aren’t going to be easily persuaded by CREDO’s findings (nor by powerful personal stories from students and families), and opposition in the form of sweeping anti-charter policy positions from powerful groups like the NAACP and the National Education Association reminds us how much work lies ahead. CREDO’s research provides a useful window into what’s working in the charter space—where, how, and for which students in particular. As such, it’s worth our careful evaluation and reflection.

[1] This piece isn’t about virtual charters. That their test results have trailed those in most other charters is noted here simply because it impacts the conclusions that can be drawn from the CREDO study.

[2] In common charter parlance, CMOs are non-profit and EMOs (educational management organizations) are for-profit. CREDO categorizes any management company that “holds the charter” (in other words, that manages nearly all aspects of the school, as opposed to contracting for particular services like a vendor-operated school) as a CMO, regardless of whether it is for-profit or nonprofit.