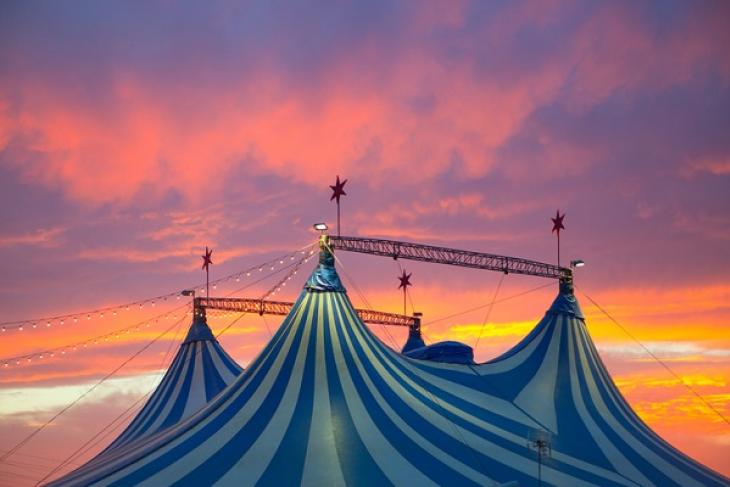 The education reform movement is a big tent, which is particularly true when it comes to the idea of holding schools accountable for results. And, I would argue, the organizations that represent the extreme poles of that tent are the Thomas B. Fordham Institute on the right, and the Leadership Conference for Civil Rights on the left.

Within the tent are people and organizations who share important common views. One is that our massive, fragmented, highly bureaucratic education system is unlikely to make all of the tough decisions necessary to improve achievement without some pressure from the outside. Another is that the needs of disadvantaged kids are unlikely to be prioritized without a push, because their parents often lack political power in our school systems. A third is that properly designed testing and accountability systems can encourage positive behaviors in schools and school systems—positives that outweigh the legitimate negatives that come from testing.

But as is the case with any movement, those of us in this big tent disagree about a lot as well. One issue is whether it’s unwise, or morally essential, to set ambitious, perhaps utopian, goals for our education system. The following exchange, between the Leadership Conference’s Liz King and me, illustrates this divide. You might find it illuminating. 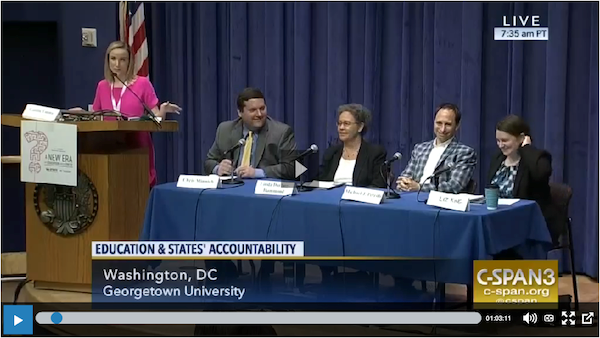 The relevant exchange begins at minute 27:00.

With all due respect Liz, what I worry about is that some of the groups have not learned some of the lessons from No Child Left Behind. I understand that your concern is that there are going to be schools that should be rated poorly, that get away with a high rating. And I get that. We should also be worried, though, about a system that labels every school as failing which is what we had by the end of the No Child Left Behind process. And what we could have if we're not careful about how we design these systems again.

And what you're going to have is what we had back in 2009, 2010 where every school is a failing school and so no school is failing… Let’s make sure we don't go back to the day where we say every school in America is failing because we set these utopian goals in Washington and schools are not meeting them.

When we're talking about utopian goals we're talking about the goals that every parent has for their own child. Every parent puts their baby on the bus so that they go to school and learn what they need to learn to be proficient and to graduate high school on time and to be ready for college, career, and life. So that is the priority and the belief of every parent and I believe every educator goes to work every day with the intention that they are going to serve all of their children.

We no longer have a binary system. This is not you pass/fail, it is much more nuanced, and frankly a lot more complicated, but it is a much more nuanced system. We are unwilling to accept, we think it is a fallacy to view achievement gaps as inevitable or natural or preordained. This is a system we have created. We have created an inequitable system through policies and practices over the past several hundred years and we are working very hard now, many of us, to fix that. And that's the work that we need to be doing. It didn't start with NCLB and it didn't start with the civil rights movement. This work is much older than all of that. In the language that we use, we want an America as good as its ideals. We all believe in an education system which supports the success of all children. And that's the system we need to be working towards. So I think it is wrong to argue that our options are only to ignore historical differences, to sweep under the rug inequitable opportunities, and to look only at overall achievement.

But Liz that's not what I argued. What I’m saying is watch out for the utopian goals. Here in Washington, D.C., look at KIPP. We have a fantastic network of KIPP schools and because of universal preschool here they start at age 3. They have kids from age 3, they work with them until they go to college age 18. They spend a bazillion dollars a year, thanks to D.C.’s funding and also private fund-raising, and they do an amazing job. And they're getting great results. But we're still talking about, you know, I think the last data showed 50 percent of their kids graduating college. That’s five times better than the national average [for low-income students]. That’s amazing. That’s the best case scenario right now, I would argue, and we're at 50 percent. So I’m just saying that 100 percent, yes, aspirationally, rhetorically, that's great to aim for that. But we cannot bake that into accountability systems because I promise you that will result in virtually every school in the country failing and if that happens there will be no accountability.