How to think about discipline disparities 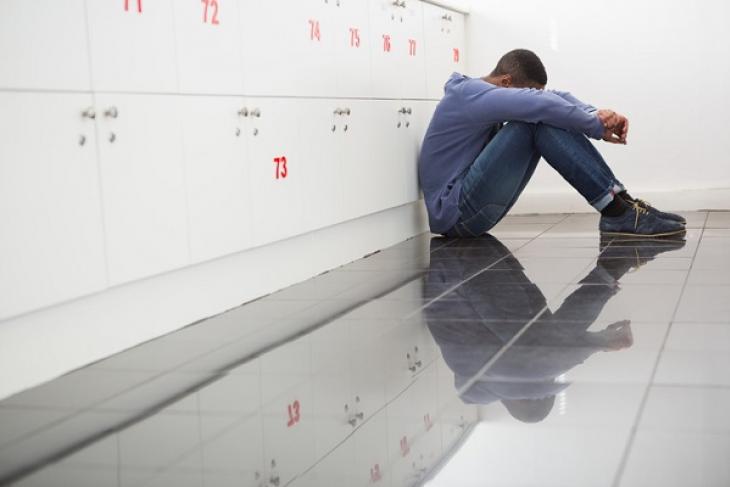 One of the things that makes the topic of discipline disparities so difficult is that it’s hard to untangle students’ behavior from adults’ responses. As Matt Barnum put it in a recent Chalkbeat article, “black and poor students have substantially higher suspension rates than white and more affluent peers. Figuring out why is tricky. Is it because certain groups of students behave differently, or because teachers and administrators respond differently to the same behavior?”

That’s the essential question, because different answers will lead policymakers and civil rights investigators to pursue radically different strategies. So which is it?

Before we get to that, let’s try a thought experiment regarding the achievement gap, one I also ran past Barnum. African-American twelfth-graders are 2.6 times likelier to score below the proficient level on the NAEP reading exam than are white students. Yet no one but an extremist would chalk up the entirety of that achievement gap to racially biased teachers. To be sure, bias plays a role, as studies are finding that teachers tend to have lower expectations for children of color. Systemic inequality is certainly a factor as well, given that children of color are more likely to attend schools with lower funding levels and weaker teachers.

But almost everyone would acknowledge that some portion of the achievement gap—probably a large portion—is due to out-of-school factors. That’s been clear since the Coleman Report, and strong evidence is found in the fact that signs of this achievement gap start as early as two or three years of age. Tragically, children of color are significantly more likely to be raised in poverty, without fathers in the home, and by adults with relatively low levels of education themselves. All of these factors, on average, make an impact on academic achievement from a very early age. 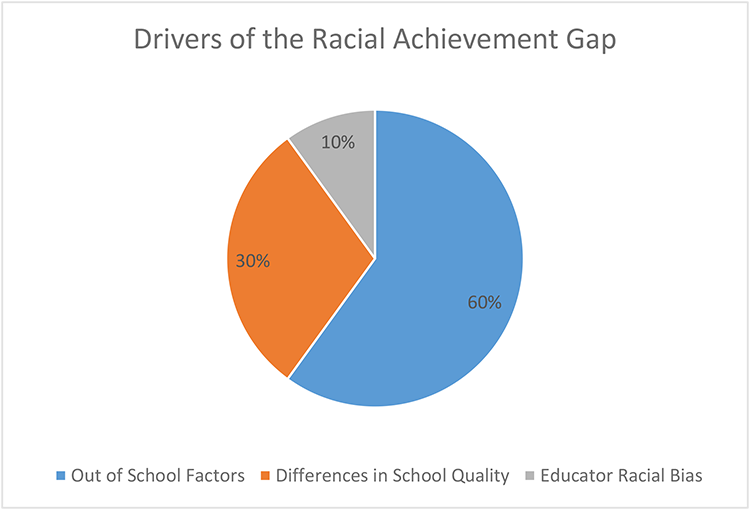 Now let’s return to the question of discipline disparities, mindful that African-American students are suspended at about three times the rate of white students. Would anyone claim that the entirety of the gap is due to racial bias in the system? Actually, that’s what many people on the left do claim, and that was the basis for the Obama Administration’s 2014 Dear Colleague Letter on the topic, which gave the Office for Civil Rights (and Justice Department) the authority to investigate school districts based on racial disparities in discipline rates alone. As Arne Duncan said at the time, “racial discrimination is a major problem today,” and disparities are “not caused by differences in children.”

Really? Isn’t it likely that at least some of the suspensions gap stems not from racism or variations in discipline policies but from differences in student behavior—differences driven by poverty and the other out-of-school factors mentioned above? Consider, for example, that when high school students themselves are asked whether they’ve been in a fight at school over the past year, 5.2 percent of white students say yes, versus 11.4 percent of black students. (See Table 13.2.) So if blacks are 2.2 times more likely to be involved in school fights, and 3 times as likely to be suspended, one could conjecture that differences in behavior make up close to three quarters of the suspensions gap.

More evidence comes from the recent study out of Louisiana. Scholars were able to find a racial discipline gap of more than two to one. But like other analyses, they could only track the rates of discipline; they could not observe the underlying behavior.

So they did a clever analysis, looking at fights that pitted white students against black students, checking to see if students participating in such fights received similar penalties. What they found was that black students were 1.6 percentage points more likely to receive a longer suspension than were white students.

Put these two findings together, and they indicate to me that 1) educator bias is playing a role, but 2) it’s probably a small role (1.6 percent in the white/black fight analysis) versus a very big gap (black students suspended at 200 percent the rate of white students).

Now, let me be clear: Only an ideologue would claim that racial bias explains none of the suspensions gap—and that would be a misreading of the Louisiana study. Other analysts have found small variations depending on the race of the teacher.

But just as much of the racial achievement gap can be explained by out-of-school factors, so too, I suspect, can much of the racial suspensions gap be explained by differences in behavior that are driven in large part by those same background factors. Consider Tom Loveless’s findings from California, for example, that students from single-parent families were twice as likely to be suspended as other students. Because black students in the Golden State are about three times as likely to live in single-parent homes, this out-of-school factor explains a big part of California’s racial suspensions gap.

There’s also strong evidence, for example from this recent Arkansas study, that much of the suspensions gap happens between schools rather than within them. In other words, high-poverty, high-minority schools suspend a lot more students than lower-poverty, lower-minority ones. Whether this is because of differences in behavior or differences in how discipline is meted out is hard to know; it’s probably some of each. And it’s not unfair to surmise that most of these “Suspensions Factories,” as I’ve called them, are mediocre-to-abysmal schools in general, with weak cultures that are struggling to maintain order.

So the suspensions gap pie-chart may well look something like this: 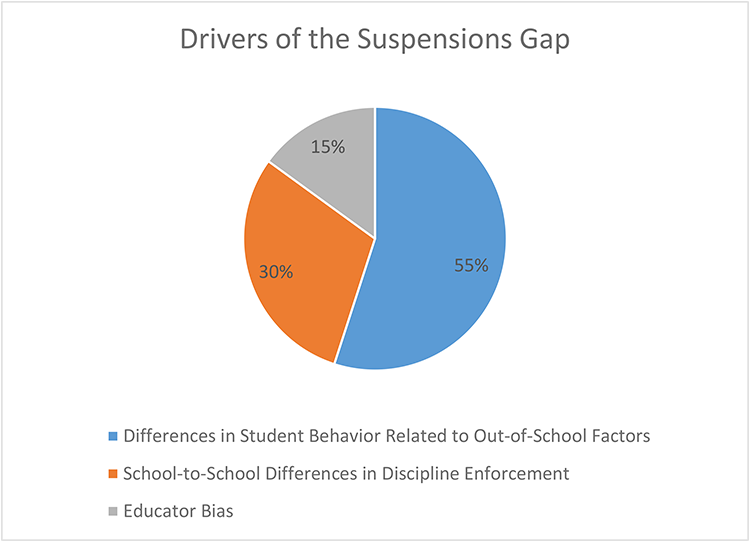 If this picture is even close to accurate, and discipline disparities are driven more by disparities in student behavior than by teacher and administrator reactions to student behavior, it has major implications. It means those of us (myself included) who want to reduce discipline disparities should be focusing more of our efforts on addressing student misbehavior, via better teaching, better counseling, stronger attention to character, more engaging environments, and stronger relationships among kids and between kids and adults in a school. It also means that civil rights officials should be incredibly careful about jumping to conclusions based on raw discipline data. (Though they should absolutely investigate specific complaints of discrepant and discriminatory treatment because of students’ race or other protected status.) What we shouldn’t do is make it hard or impossible for educators to use suspensions as one tool in their discipline toolbox, or embrace what amounts to quotas on student discipline, which could result in under-disciplining some groups of students or over-disciplining others.

We also need to develop smart, realistic approaches to dealing with so-called Suspensions Factories. If indeed many of these are schools with weak cultures, merely telling them to reduce suspensions is likely to make things worse. (If they even follow the mandates—our new study on Philadelphia discipline reform by Matthew Steinberg and Johanna Lacoe found that many of these schools simply ignored the new rules.) Such schools need massive amounts of help in order to transform into orderly learning environments that don’t have to resort so much to exclusionary discipline. Policies that don’t have a mechanism for providing such support—like the 2014 Dear Colleague Letter—should raise red flags for everyone.

Making progress on this difficult issue is predicated on acknowledging an uncomfortable truth, one that can easily be demagogued: On average, due to a host of factors beyond their own control, including poverty, fatherlessness, and trauma, poor children of color are more likely to misbehave at school than are their peers. And starting with the facts makes it much more likely that we will find our way to some real solutions.