How Ohio's walk back of graduation requirements is like overprotective parenting 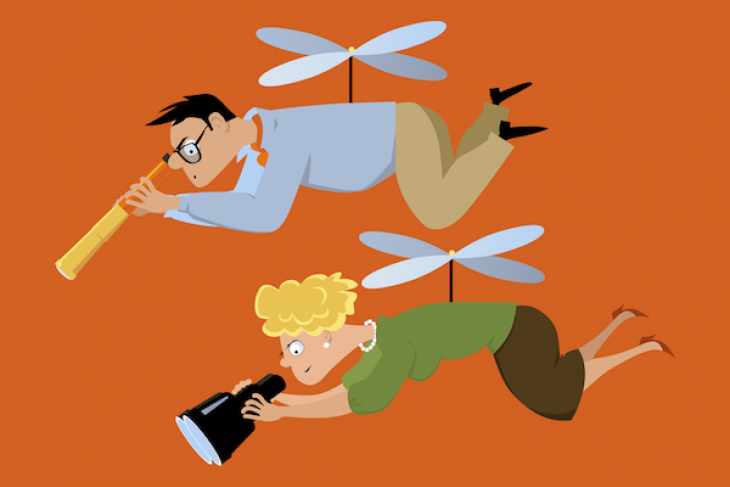 In my book, state-level policymaking should be like good parenting. It should incentivize the behaviors you’re looking to inspire, grant autonomy (when your charges have earned it), and refrain from too much meddling or coddling. It should be transparent and honest, truthful about tradeoffs between short-term discomfort and long-term gain, and motivated by a clear compass rooted in what’s in the best interest of the kids’ wellbeing.

So why does Ohio’s latest softening on what we expect of our high schoolers bring to mind so many parallels to helicopter parenting? Allow me to explain.

I first learned about helicopter parenting from my husband, a psychotherapist who counsels a number of adolescents and young adults. Years ago, he began noting (broadly, never in specifics) that many young people he counseled seemed to lack the fortitude and emotional resilience to overcome basic life obstacles. For instance, they might have a panic attack after earning a “C” on a paper, find themselves bedridden with depression if they didn’t get into their first-choice college, or wind up suicidal after a break-up with a girlfriend or boyfriend.

A common thread among these clients was that their parents tended to “hover,” micromanaging their lives and worse yet protecting them from the natural consequences of their decisions and from the discomfort that comes with failure. At that point, the term “helicopter parenting” wasn’t yet part of my lexicon, nor had I seen expert takes from university deans, psychologists, or doctors that brought it fully into the mainstream. But I had heard enough to be suspicious of participation trophies and the self-esteem movement. I vowed that if and when I had children of my own, I’d allow them the dignity of facing the truth, even when—and maybe especially when—it included failure. It seemed clear that the alternative was infinitely worse, and much harder to recover from.

Since then, these themes have shown up somewhat unexpectedly in my own line of work—education policy. The “opt out movement,” wherein parents keep their kids home on state testing days, struck me as an offshoot of helicopter parenting—especially among those reluctant to expose children to stress or anxiety. (Certainly, there are kids for whom anxiety is a legitimate challenge, though such debilitating levels are arguably rare.)

Support for higher academic standards, which Ohio began moving toward in 2009, and the fight to overcome the “honesty gap”—the yawning chasm between states’ sunny numbers on student proficiency versus more rigorous national measures (e.g., NAEP or ACT)—made deep sense. It paralleled my nascent views on parenting and my antagonism toward helicoptering, inasmuch as I believed that if young people aren’t prepared for life—whether academically or emotionally—it’s better that parents know right away, while they still have time to adjust course.

Most recently, Ohio’s debate over graduation requirements has me looking through this lens again. Ohio lawmakers must decide whether to accept the recommendations passed by the State Board of Education this week to extend the latest “fix” to the classes of 2019 and 2020. This menu of options allows students to earn a diploma without demonstrating mastery in any academic content area. A new “jobs readiness seal” earned by completing a checklist of vague and subjective traits such as “global/intercultural fluency” and “dressing and acting appropriately” takes us even further away from the mark. Are we really ready to award diplomas so subjectively?

These options weaken what is already a somewhat meaningless diploma, amount to state-sanctioned low expectations, and set Ohio back three decades when it comes to expecting high school students to meet a basic threshold of competency in key subjects. (Ohio’s 117th General Assembly passed a law in 1987 that required the graduating class of 1994 and classes thereafter to pass ninth grade proficiency exams.)

Like helicoptering, creating competency-free options for young people to graduate is detrimental no matter how loving it’s intended to be. Students, rather than schools and adults charged with running them, will bear the costs down the line. And the cruel irony is that the students for whom we’ve created these alternatives, unlike those who are fiercely helicoptered, are far less likely to have a safety net to fall back on when their academic deficiencies catch up to them.

To some, criticizing the notion of diplomas-as-participation-trophies might come across as elitist. After all, who are we to stand between eighteen-year-olds and their high school diplomas? I worry less about the fact that we’re letting students off the hook than the reality that we’re letting schools off the hook. If Ohio lawmakers accept the State Board’s recommendation and extend these soft alternatives for several more years, they are tacitly agreeing with the idea that mastery is just not possible for some students.

At the end of the day, Ohio’s weakening of graduation standards reminds me of the most disturbing aspects of helicopter parenting. It represents the path of least resistance, regardless of the long-term consequences for students whose interests we’re supposed to protect. It robs students of the opportunity to work hard and achieve something meaningful. It allows adults to save face, albeit temporarily. And, sadly, the repercussions will likely not be felt until years down the line, once those same students enter a world for which they are utterly unprepared.