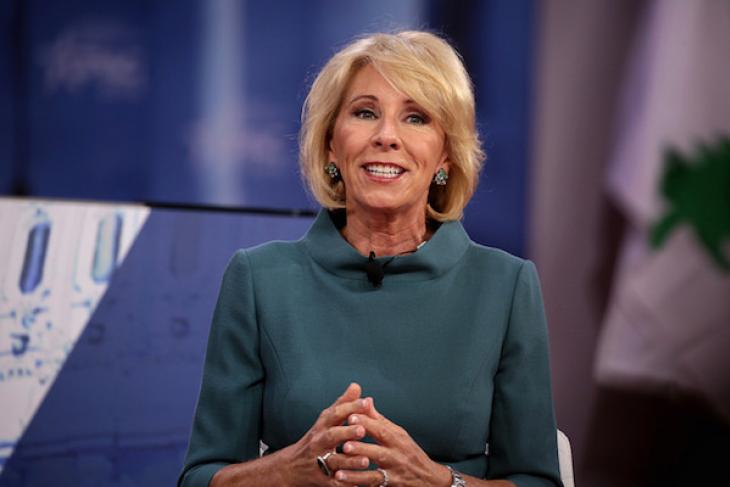 The commentariat is feasting on Secretary of Education Betsy DeVos’s 60 Minutes interview with Lesley Stahl, calling it brutal, botched, and an example of why we shouldn’t elevate inexperienced billionaires to positions of public trust. And those are the kinder depictions.

Like everyone in education reform, I wish she had made a stronger defense of charter schools, showed more knowledge of how things are going in her home state of Michigan, and made it clear that, although student achievement rose dramatically in the late 1990s and early 2000s, it has been mostly stagnant since then.

But more than anything, I regret that she gave such lackluster answers to Stahl’s questions about school discipline. We’re about to have a big national debate about the Obama-era school discipline policy, and it’s essential that she and other administration officials be capable of explaining the issues at hand.

STAHL: So you've been on the job now over a year. What have you done that you're most proud of?

DEVOS: We've begun looking at and rolling back a lot of the overreach of the federal government in education. We are studying that [Obama-era rule seeking to prevent discriminatory discipline in schools]. We need to ensure that all students have an opportunity to learn in a safe and nurturing environment. And all students means all students.

STAHL: Yeah but let's say there's a disruption in the classroom and a bunch of white kids are disruptive and they get punished, you know, go see the principal. But the black kids are, you know—they call in the cops. I mean, that's the issue: Who and how the kids who disrupt are being punished.

DEVOS: Arguably, all of these issues or all of this issue comes down to individual kids. And—

DEVOS: —it does come down to individual kids. And—often comes down to—I am committed to making sure that students have the opportunity to learn in an environment that is conducive to their learning.

MMQ: She should have said, “Leslie, that’s a great example. Students should never be treated differently for doing the same thing. That is, always has been, and always will be illegal, and it’s the duty of the Department of Education to offer protection to students who bring forward a complaint like this. Nothing we are considering doing would change that fact that such a school would be found to have violated the law, and would be held accountable.

STAHL: Do you see this disproportion in discipline for the same infraction as institutional racism?

DEVOS: We're studying it carefully. And are committed to making sure students have opportunity to learn in safe and nurturing environments.

MMQ: She should have said, “Let me repeat: If students are being treated differently for the same infraction because of their race, that is against the law, and we will not tolerate it. What we’re looking at is an Obama-era policy that said that even if students are treated the same, even if schools have discipline policies that are fair and implemented even-handedly, they still could be found to have violated the law if students of a certain group are disciplined more frequently. That’s downright Orwellian. And the concern is that it is leading some schools to be less safe and orderly, and leading some schools to have lower expectations and lower standards for the behavior of some groups of students. That’s another form of institutional racism*—the soft bigotry of low expectations.”

Liberals are going to argue that DeVos is considering opening the door to discrimination. They are wrong, and DeVos and other officials should say so.

* Cribbed from Max Eden’s comments at Heritage on Monday.