Fill in the missing building blocks of college and career readiness

Editor's note: This post is a submission to Fordham's 2018 Wonkathon. We asked assorted education policy experts whether our graduation requirements need to change, in light of diploma scandals in D.C., Maryland, and elsewhere. Other entries can be found here.

Imagine Rip Van Winkle earned a diploma from a New York high school in 1998 and worked as a printer before falling asleep. Waking up twenty years later, he wouldn’t have the skills to do his old job. In a world of rapidly advancing technologies changing most job requirements, high school is not a good end point for anyone’s learning.

Projections by Moody’s Mark Zandi confirm that more than half of all jobs by 2030 will require at least an associate degree. But supply isn’t keeping up with the demand. Only 41 percent of Americans ages twenty-five to sixty-four have at least an A.A. While some policy analysts argue that “college isn’t for everyone,” and journalists regularly write stories about the recent bachelor’s-degree-holders stuck in a low-skill job, the data shows that’s very rare. Americans are undereducated. This widens inequality and causes us to lose out on economic productivity.

The question of what standards students should meet to graduate from high school has a straightforward answer: By default, they should earn a college and career ready diploma. Indiana has been a pioneer in this space for more than a decade.

Influenced by Achieve’s American Diploma Project and NGA’s Honor States Program, in 2007, Indiana developed the Core 40. To graduate from high school, students must complete four years of English, three years of mathematics (including algebra II), three years of science and social studies. Students can meet additional requirements (e.g., foreign languages, Advanced Placement courses, and programs of study) to earn the Core 40 Academic or Technical Honors diploma. Parents can opt out their students out of these pathways and earn a general diploma.

Eighty-right percent of high school graduates have earned the Core 40 diploma (with 34 percent earning Honors). Indiana also aligned the incentives across systems. Since 2011, four-year public colleges in Indiana have required the Core 40 diploma. College remediation rates are on the decline and on-time degree completion rates are on the rise. The State Board of Education recently tweaked these requirements starting with the class of 2023, eliminating some tests and adding project-and work-based learning experiences.

In spite of these successes, less than half of states have followed Indiana’s lead. A 2017 study by Achieve found diploma requirements continuing to differ greatly from state to state. Only twenty states report data on whether or not students have completed a college and career ready course of study. As their transcripts show, too many students are “meandering towards graduation.” And in the case of some urban high schools such as Ballou, students are graduating without showing up.

One reason why college and career ready diplomas aren’t the default option is that many states have an earlier problem they struggle to solve. It’s hard to require three years of college prep math when many students haven’t been successful in algebra I.

In Florida, Maryland and New Jersey, overall pass rates on the Algebra I end-of-course exams hover around 35 percent. But unpacking this data in the graph below shows an even deeper problem. A third of the students who take algebra I are eighth graders but they are a majority of students meeting and exceeding standards. 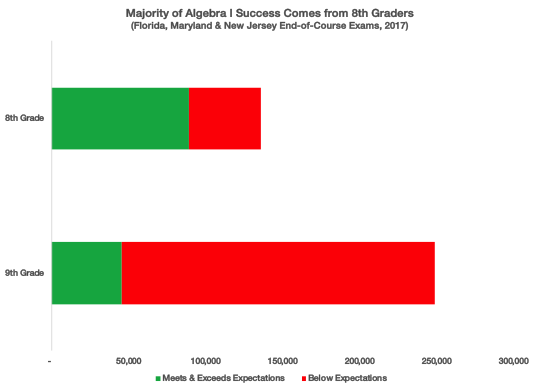 Use diagnostic data to close gaps

At a typical urban high school in these states, the incoming grade levels of an incoming ninth grade class might look like this: 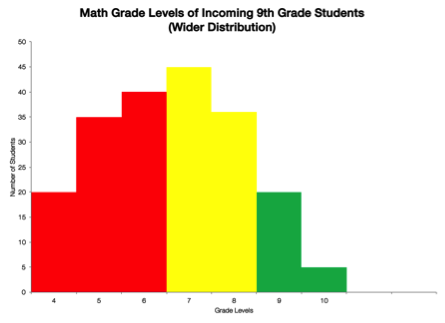 These schools have inherited problems not of their own making. Nearly half of the new high school students are three years or more below grade level. An algebra I teacher has a Herculean task trying to get everyone up to standard. What if school systems could tighten this distribution and prevent failure?

Great advancements have been made in the development and teachers’ use of daily or weekly diagnostic data to inform student learning. By diagnostic, we mean data that identifies students’ strengths and weaknesses to help the learner improve performance. As Dylan William argues, to be effective, data feedback must provide a “recipe for future action.”

Teachers in the schools using Teach to One Math are taking diagnostic data to map from fifth to ninth grade the math clusters needed to eventually be successful in Algebra. A quick look at this map shows that being able to multiply and divide fractions is an essential pivot point for students. If they move on from sixth grade without that understanding, algebra will be a steep, uphill climb. If we can ensure they have that mathematical understanding intact, they’re much more likely to be successful.

In Ontario Canada, researchers found that using diagnostic data had more a positive impact on teaching and learning more than traditional standardized tests. Any school system hoping to replicate this success also has to build the infrastructure, culture, and analytic capacity supporting data use. Over time, the typical urban high school, linked to middle schools also using diagnostic data, ought to have an incoming ninth grade class that looks like this: 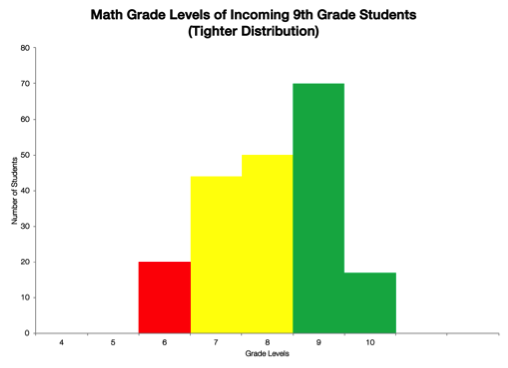 My friend Patrick Riccards suggests in another entry that high schools focus on mastery and move away from seat time. One way to do this would be to establish standards-based report cards.

While most states have moved to true college-ready standards and upgraded their tests, schools continue to use letter grade report cards. When a student earns a B+ in algebra I, it’s unclear what that local grade represents, especially if he struggles to pass the end-of-course exam. How can we expect large numbers of students to be successful when these systems aren’t closely aligned?

Report cards need to evolve beyond their late nineteenth century origins so that letter grades reflect the specific knowledge and skills a student has learned in that class. They need to be longitudinal across grade bands (K–2, 3–5, 6–8, 9–12) so a third grader knows how she’s meeting present and future expectations. This would also allow for parents and students to see growth over time. The grain size needs to be at the cluster level, grouping at clusters of standards, such as “equivalent fractions.” Rolling up to domains is too broad; detailing each standard is too specific.

These are initial ideas for what would be a very complex undertaking at scale. A few suburban districts, such as nearby Montgomery County, Maryland have tried it and shown it’s very easy to get this work wrong and hard to get it right. The International Baccalaureate schools suggest one way forward. Across their large network in more than one hundred countries, an international baccalaureate diploma has consistent meaning because teachers calibrate and moderate scores of external exams and teacher assessments.

With better data in the hands of teachers and a fuller picture of whether or not students’ day-to-day work is meeting college-ready standards, high school students won’t be meandering on roads to nowhere but solidly on paths to upward mobility and lives of using one’s mind well.

David Wakelyn is a partner at Union Square Learning and was previous policy advisor to Governor Andrew Cuomo.