A failure to balance Advanced Placement access and quality 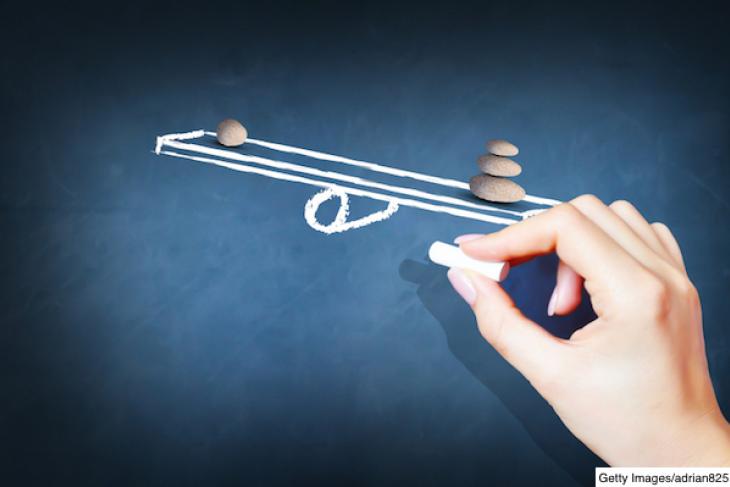 In 2015, my school district in Douglas County, Georgia, received two accolades for its Advanced Placement program. The first was the College Board's prestigious AP District Honor Roll, which recognizes growth in AP enrollment if districts also “simultaneously maintain or increase” AP exam passage rates—defined by the percentage of test takers earning a 3 or higher out of 5 on the assessments. Only five other districts in the state made that list.

The second was that all five Douglas County high schools were named AP Honor Schools by the Georgia Department of Education—despite their students’ less-than-impressive results on Advanced Placement tests. The failure rate (scores of less than 3) was 77 percent. Approximately 47 percent earned a 1, while less than 2 percent got a 5—12 percentage points below the national rate. And more than one-third of the district’s seventy-three AP classes had failure rates of 90 percent or more.

With such low scores on the AP exams, how is it possible that a district can be honored for its AP program? And how does the dismal passing rate square with the College Board’s requirement that those rates must be maintained or raised as the program expands?

Figure 1 begins to explain. From 2011 to 2013, our exam scores dropped while enrollment skyrocketed, with an 80 percent increase in the number of exams taken. But the 2015 AP District Honor Roll compares 2015 to 2013, which was also the year the passage rate of AP students who took an AP exam bottomed out at 16 percent. Maintaining or increasing such minimal success is not much of an accomplishment. And naming such a performance to an “honor roll” is like giving the most improved player award in baseball to someone who increased his batting average one year to the next from .100 to .150—a 50 percent increase, but still bad enough to send him back to the minor leagues! Yes, a better passage rate coupled with major expansion of participation deserves some credit on the “growth” front. But this major accolade is too much when the district merely nudged up its dismal 2013 passage rate.

As for our district’s high schools being named Georgia AP Honor Schools, this recognition is simply based on the number of courses offered—a criterion that encourages schools simply to shove students into Advanced Placement who are not prepared to succeed there, leading to frustration on their part and potentially harming the experience of their higher-achieving peers.

Indeed, a major culprit of Douglas Country’s rapid AP-program expansion—and its drastic decline in achievement—was an “open enrollment policy” whereby the district essentially scrapped academic qualifications in the name of “expanding opportunity.” This was more than a passive open door. Students were aggressively recruited into Advanced Placement classes, regardless of their preparedness. Colleagues informed me, for instance, that some students in our AP history and literature classes were reading at a middle-school level.

Another example: one of our high school principals decided to add AP Physics despite the objections of the school’s sole physics teacher, who knew the students weren’t ready and suspected that the principal just wanted to earn recognition for expanding the school’s Advanced Placement offerings. A younger teacher agreed to teach the class, and the principal called all the parents of the students they were trying to recruit to convince them to enroll. The administration succeeded in upping participation, but once the course started, the teacher realized that most of its pupils had no shot at passing the AP exam, and therefore created separate tracks for students who were going to take the test and for those who were not because they had little chance of succeeding—a common practice in Douglas County. Despite that accommodation to reality, all the students on the “exam track” still failed.

Even as they failed to get qualifying scores on the AP exams, many students were making As in the classes. My colleagues and I suspect that schools were inflating grades so that students would be more willing to enroll. Figure 2 shows the results of our inquiry into this. 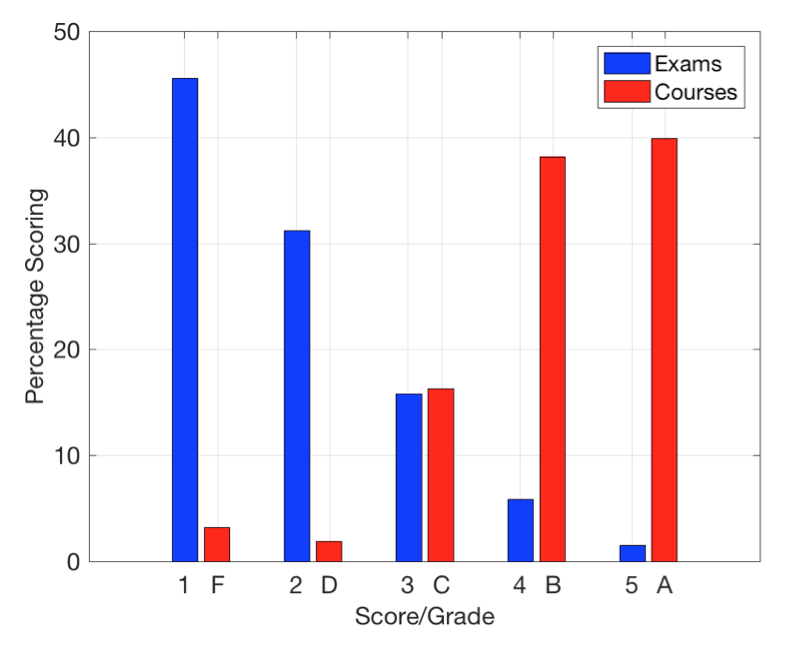 The course grade distribution is essentially the inverse of the AP exam grade distribution—even though 51 percent of the students in Douglas County AP courses did not even take the exam (likely because they were pretty sure they wouldn't pass it). And the overall district-wide passage rate—i.e., the percentage of AP students who passed an AP exam, including those who opted not to sit for one—was 11 percent.

Yet at every high school, at least 73 percent of students made an A or a B in the AP classes themselves, as judged by their teachers. In the worst of our five high schools—which still, recall, was named a Georgia AP Honor School—only 31 percent of AP pupils took the pertinent AP exams and, of those test takers, only 11 percent earned a 3 or higher. That amounts to an overall passage rate of only 3 percent—even though 79 percent of its enrolled students earned an A or a B.

This rapid expansion also seems to have had a deleterious effect on the district’s bona fide high achievers. Schools lower academic standards to accommodate unqualified students, and qualified students end up learning less. One of the best and brightest students I ever taught took AP Calculus as an elective in his senior year. He made a 750 on the mathematics portion of the SAT, received a full scholarship to a prestigious private university, and earned a perfect grade in the course. Yet he managed only a 2 on the AP exam. His disappointed father asked him, “I could have helped you. Why didn't you ask me for help?” The son replied, “I had a 100, Dad. I didn't think I needed help.” These grades dupe students, parents, and stakeholders alike.

In 2009, the Fordham Institute raised concerns about the effects on student achievement of rapid AP expansion, enabled by low or non-existent course-entry requirements. The question remains whether Douglas County is an aberration, or whether it’s the inevitable result of an aggressive push for wider access and participation, coupled with low entrance requirements.

Jeremy Noonan is a father of four school-age children and a certified science (including in AP Chemistry) instructor in Georgia, who has taught for ten years in public school, private school, and home school cooperatives. He also runs Citizens for Excellence in Public Schools, a local education advocacy group.