Expanding CTE: Dual enrollment and regional centers are worthy of support too 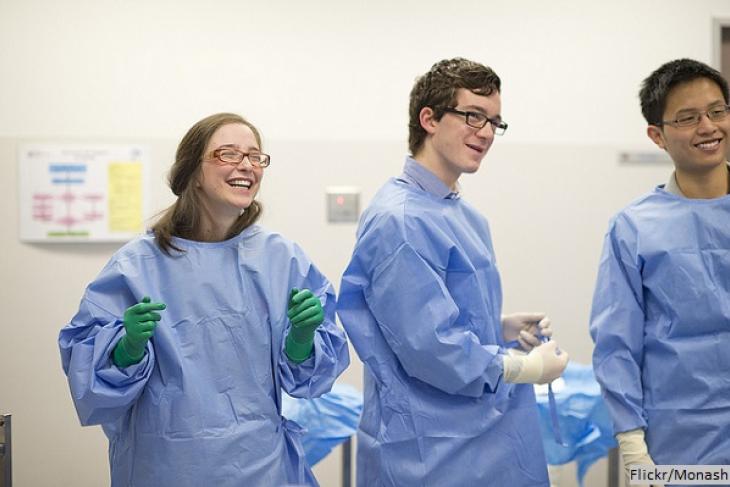 Career and technical education (CTE) schools and academies are important and impactful, but they’re also scarce and expensive. To develop the skills of the millions of students who want high-quality CTE, we must be more egalitarian in the ways students access it—and the prospects for economic stability and success that it can create.

CTE is not just about the courses students take; it’s also about form: how, when, and where courses are delivered. And this varies depending on the state, district, and even school.

In most cases, the courses a student can take are determined by what’s available at the school site where they are enrolled. Most traditional high schools offer basic CTE classes in addition to academic coursework. Some host school-within-a-school “career academies” where academy students take CTE coursework focused around a single career theme (while taking academic classes at the host school); non-academy students can’t take these classes. There are also fully independent, self-contained career/technical high schools that serve as enrolled students’ home schools. Like academies, CTE schools usually focus on developing students’ skills to prepare them to enter a particular industry.

While academies and self-contained CTE schools have important, positive academic and economic effects on students, access to them is extremely limited. Less than 4 percent of high schools in the United States are CTE schools. And although there are no recent data on the number of academies, there aren’t many, and they typically only enroll between thirty and sixty students per grade. Even in New York City, where they’ve gone all-in on both CTE schools and academies, demand far outstrips supply. “Some programs are so popular with middle-class families that they have trouble balancing their student bodies to meet the needs of a representative cross-section of New Yorkers,” note Tamar Jacoby and Shaun Dougherty. Likewise, eleven thousand students in Philadelphia—nearly one-third of all high schoolers—applied for 2,500 available seats in a CTE program. In Massachusetts, CTE schools have long waiting lists but can’t accept more students because of administrator-reported shortages in physical space, financial resources, staff, and equipment.

Our failure to increase the supply of CTE to meet demand is a huge waste of human capital, and it is especially problematic in an economy suffering from a long-term shortage of skilled workers for entry-level positions—especially those that do not require a four-year degree.

Schools and districts aren’t deliberately creating a shortage of opportunities. CTE schools and academies are expensive to build and run, often requiring custom-built labs with specialized equipment and teachers, in addition to the standard operating costs of providing academic instruction. Some schools form industry partnerships with companies like IBM, which are attractive to businesses because they prepare potential employees and are good for an organization’s reputation (not to mention the fact that these partnerships are highly recommended by the current Perkins Act, and could be mandatory come its reauthorization). But even when partnerships work out, businesses aren’t going to fund the education of thousands of students across multiple sites. Smaller cities that are not home to large, successful companies with which to partner are even worse off.

To meaningfully develop the skills of millions of students who want high-quality CTE, we must increase access to courses and facilities. The easiest solution is dual enrollment: Support and encourage high school students to take the CTE classes already being offered at community colleges. To do this, we have to fix the state policies that dictate how dual enrollment is funded. In most states, the tuition to pay for the coursework comes from some combination of the district, the student, and the community college. Yet schools and districts have little incentive to encourage dual enrollment if they have to pay the post-secondary institution to provide the courses, and community colleges have no desire to go along if state law says they have to waive tuition. (Worse, in some states, the law allows high schools and/or community colleges to deny students participation.) And asking students to pay their own way will exclude low-income families.

States can expand CTE by requiring districts and schools to allow eligible students to participate in dual enrollment and equitably distributing funding across institutions. Federal legislation via Perkins reauthorization can support the latter by creating a system by which states use federal funds to cover student tuition in CTE classes directly—much like “backpack funding,” but at the course level.

It’s also imperative that state and federal CTE laws focus more on quality and less on strict prescriptions for specific coursework delivery models. Despite being favored by policy makers, CTE schools and academies already don’t provide enough seats. A move toward stringent requirements for industry partnerships limits them even more. At the same time, legislation that exclusively prioritizes academies does so at the expense of regional technical centers. By capitalizing on economy of scale, centers can give thousands of students access to high-tech, state-of-the-art facilities. State and federal law should support and fund these centers too.

Finally, support for CTE must be tied to whether coursework is relevant to the state’s economy. It’s true that many high-growth industries require CTE preparation in STEM, especially for jobs located in urban areas. But in some states, funding for less glamorous fields like agriculture are at risk—despite the fact that preparation for modern agricultural careers is just as high-tech and valuable to certain states as preparation for writing computer code. Unfortunately, too many laws incentivize STEM-focused CTE at the expense of other skills. That has to change.