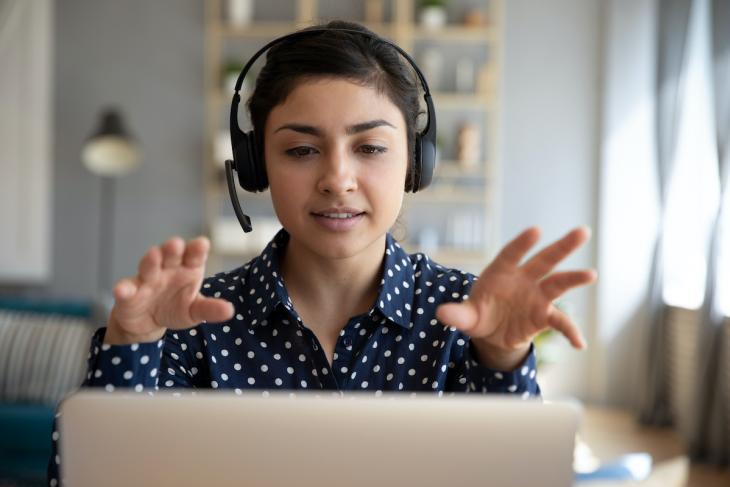 New York City has been brought to a halt; only the sirens of ambulances pierce the fateful silence. But for Success Academy students, learning continues. One week after the network launched distance learning at all forty-five schools enrolling 18,000 New York City students, I embedded in two days of classes.

At Success Academy High School for the Liberal Arts, small groups of students come together at 9:00 each morning via video for Advisory, an unstructured conversation to strengthen their community and begin their day. Their work will continue until 5:30.

I clicked into my first class via Bluejeans, a video conferencing platform. I’m glad I wasn’t late, for precisely on schedule appears Francis Keating, a young ninth-grade geometry teacher with a brisk but warm manner. No longer constrained by the physical classroom, Keating is simultaneously teaching 112 students from seven sections. “Alexa, what time is it?” he asks, turning to his digital assistant. “It’s 9:35 am in New York,” she replies. “That means it’s time to get started,” Keating adds, “so good morning and welcome!” As the pandemic raged across the city, the gesture underscored continuity—to punctuality, to the exacting use of time, to learning and opportunity.

He reminds them that at the end of the ninety-minute class, they’ll take a quiz that will count for 15 percent of their course grade. “All of you have the ability to rock it today,” he encourages, as he dives into a review problem set. Every student is expected to jot down their mathematical reasoning. “Remember to show your thinking work!” he urges.

Keating and his two co-teachers can see exactly how each of their students, sitting at their dining room tables or sprawled on their sofas, are faring because on their Chromebooks they’re using an on-screen stylus in Kami to mark up the problem. Gathered on Slack as the class proceeds, the teachers together identify emerging misconceptions and choose which student’s work to share. Within minutes, Kaitlyn is welcomed as a “guest” to present her thinking to the class. (To protect the privacy of Success’s students, I refer to them by pseudonyms.)

As she gets underway, I’m hooked, but it’s time for ninth grade pre-AP world history class with Amanda Levy. Class begins with an engaging online poll on the investiture controversy in medieval Europe. Who would prevail, the poll asks, in the installation of high church officials: the nobility or the papacy? Within seconds, seventy-two students have cast their votes. As in Keating’s class, students quickly turn to working independently, preparing brief explorations of the causes of the peasant rebellions or the erasure of Viking society as what is now Scandinavia Christianized. Levy calls on one student, Tiana, who with one click appears on screen and presents her work. It’s impeccable: “When empires failed to unify their land and people, violence, instability, and conflict arose,” Tiana had written. But even she is pushed by Levy to extend her reasoning. Tiana proposes to compare and contrast the turmoil of these times with the stability of the Roman Empire.

I caught up with Levy for a few minutes to ask her about her experience with distance learning. The first day was rough, she allowed. “A lot of students were trying to turn on their camera and mics and message all their friends.” This was an easy fix, she explained. Success quickly moved from a Bluejeans video call to a webinar mode where such interactions can better be controlled.

She’s thrilled that she can peruse each student’s production in real time. “Truthfully, I love it. It’s similar to walking around. Yes, I can’t use the tone of my voice. But it is the most written feedback on student work I’ve ever given.” Work is due from students at 10:59 every evening; they’ll all get it back with comments within twenty-four hours. “A lot of students are commenting on my comments, whereas in the past I wouldn’t have been sure if they had read them,” she enthused. The accountability, she said, “is super important. Parents have reached out to me to tell me how much they appreciate that their kids are working so hard and being held to a high bar.”

Her early findings from distance learning are fascinating. Some students seem to be faring better than in the traditional classroom, she told me. “One student told me that’s because he’s focused on the deadlines, and in class he’s sometimes distracted.” But some high-achieving students seem to be coasting.

Next up was eighth-grade math with Robert Sellers at Harlem East Middle School. The class, which explores linear and exponential functions, begins promptly with a succession of “do now” problems, thrusting students into the work. Sellers could see on Google Classroom a rolling count of exactly how many students are working on each problem. “Malik, move on! Jordan, move on,” he exhorts good naturedly. He begins to cold-call students, not relying on those who virtually raise their hands, ensuring that everyone is on their toes. “Kevin, can you tell us why your exponent is n divided by 4?” Kevin instantly comes on the screen and ably defends his thinking.

Soon, Sellers asks the students to develop an imaginary real-world scenario that matches the equation y=3(0.85)x. On screen, he watches their creativity take flight. “I can see a lot of students describing money situations. Love that. Keep in mind some of the vocabulary we’ve learned about, like depreciation—see if you incorporate that. Madison, could you read us your story for the exponential situation?” Her work appears on screen. “I said that Mario was taking Ibuprofen,” Madison says. “And 300 milliliters of Ibuprofen was in his system in the beginning, and the amount of Ibuprofen in a person’s system decreases 15 percent every hour.”

Sellers closes out the class with an exit ticket, this time a rapid-fire on-screen competition using Kahoot. As a math function appears on screen, his ninety-fix students have just seconds to choose from among four statements characterizing the function—and accumulate game points along the way. “Yes, it is y=-3 for our asymptote!” he cries. “All right,” he narrates, his tone turning to showman, “Zion moves to first place, Jeffrey takes second, Laila takes third, and Kiara is still on the board in fifth!” I struggle to keep up and win a single point.

In these virtual classes, I see all the components of what we know moves students forward, and fast. Teachers are intellectually prepared; Keating told me he plans with his colleagues for ninety minutes each day and the entire staff huddles at day’s end. Teaching follows an ambitious, coherent, and cumulative curricula that builds knowledge. There is an almost fetishistic respect for time; every minute is put to use, learning is not lost to foolish and condescending “hooks” at the start of class (the material is itself the hook), on-screen stopwatches are ubiquitous. Teachers cold-call unhesitatingly. There is an unrelenting focus on what students are producing and what their in-class work reveals about their misconceptions and mastery, allowing for real-time course corrections. And student accountability has not been suspended.

“It feels like everyone is on board,” Levy told me. In the pandemic, her colleagues understand their charge. “OK, so this is what we have to do,” she said. “If we don’t all work together, we’re not doing right by our students.”

Success Academy won’t be every parent’s choice; the program is, by American standards, demanding. But how many urban districts and networks can claim, as Success, near-universal student proficiency—that, by the state’s measure, nearly every child remains firmly on the path to college? And now, with the city shut down and schools shuttered, how many have a viable plan to prevent their students, already at grave risk, from losing ground?

Success’s teachers understand that their students—93 percent of color, and 78 percent from low-income households—are there to learn, and their schools’ solemn responsibility must be fulfilled. Especially in a time of crisis, schools must continue to offer structure and continuity. And love: the love that is high academic expectations for their students.

Yet there are growing calls for eliminating expectations altogether, in the name of compassion.

A Columbia English professor proposed this month to give all students A grades as a default, strip down work expectations to the bare minimum, and wrap up classes as quickly as possible. Another professor has counseled her colleagues to “please do a bad job putting your courses online,” and to “release yourself from high expectations right now because that’s the best way to help your students learn.”

I suspect the Success teachers I spoke with be would be horrified by this thinking. Of course schools must show grace and recognize their students’ staggering hardships. For instance, in normal times, one Success high school teacher explained to me, “We frowned on make-up work.” But if now a student needs to make up an assignment, they’ll gladly arrange for it. Similarly, elementary teachers schedule their daily FaceTime calls with each of their students at the convenience of families. But learning continues.

It will be said, foremost, that Success is privileged to have “motivated parents,” as though motivation were a finite resource, like gold in the ground, extracted and hoarded by Success. No, parent and student motivation is forged in a network’s culture—an infinitely expandable asset that effective schools mint as much as tap. Distinctive schools boldly shape culture; they present new models of engagement that other families would in time gladly emulate. Too few urban schools invite their families to truly join in the school’s mission or speak candidly about how they can best support their children’s studies. Might such expectations create new burdens for parents? Yes, but it releases them of others. In this moment, for instance, Success’s meticulously planned classes and sustained expectations for students’ work will come as a relief to many parents.

I left my virtual visit to Success impressed—and saddened. As my CRPE colleagues’ own research has found, vanishingly few urban districts yet offer synchronous learning at all, and many leave families to scour online for learning resources.

Editor’s note: This essay was first published by the Center on Reinventing Public Education.

Steven Wilson is a senior fellow with the Center on Reinventing Public Education and founder of Ascend Learning, a network of tuition-free, liberal arts charter schools in New York City.