ESAs aren't for everyone 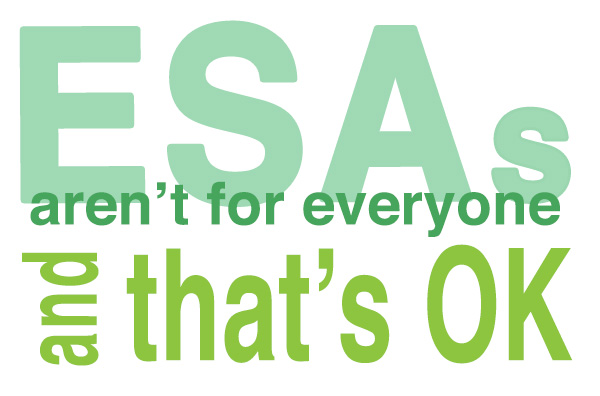 Perhaps you’ve been on vacation or caught up in the historic events of recent weeks, but over the past ten days, we at the Thomas B. Fordham Institute hosted our second annual Wonkathon. Last year’s was about charter school quality; this year’s focused on how to implement the brand-new (and groundbreaking) Nevada education savings account program. (Congratulations to Seth Rau of Nevada Succeeds, the winner of the Wonkathon, who both seized his home field advantage and proved that when it comes to using similes, you’d better go big or go home.)

As Jason Bedrick of the Cato Institute rightly concluded, our blogfest demonstrated remarkable consensus, at least among the scholars, policy analysts, and practitioners who participated. Nobody wants Nevada to micromanage the program; everyone understands—and wants regulators to address—the risk of financial malfeasance. Most agreed that making educational providers assess their results with a nationally norm-referenced test was a reasonable approach.

Yet lurking behind the apparent consensus is an unspoken question: What’s this reform trying to accomplish? The law itself says it wants to increase student achievement and parental satisfaction. But go back and read the fourteen posts and you’ll find that the ones most enthusiastic about ESAs don’t say much about the achievement half of this equation—typically reformers’ touchstone. (Even reform apostate Diane Ravitch noticed as much when she questioned Rick Hess’s ESA enthusiasm: “Surely he doesn’t believe that Nevada will emerge at the top of NAEP in five years, ten years, or ever because of all this subsidization of nonpublic schools.”)

Instead, there’s a lot of talk about “customization” (from Matt Ladner), “flexibility” (Jonathan Butcher), “experimentation” (Jason Bedrick), “personalization” (Adam Peshek), and “innovation” (Travis Pillow). To be sure, for many of our wants—and for no small number of families in Nevada and elsewhere— increased choice, outcomes notwithstanding, is an intrinsic good in itself.

But if your primary goal is to significantly raise student achievement as it is traditionally defined (test scores, graduation rates, college attainment, etc.), especially for disadvantaged children, education savings accounts are probably not the way to go. Instead, you’d want to learn from last year’s Wonkathon and create the conditions for high-performing, “no-excuses” charter schools (or voucher schools) to thrive. You would want to put in place a strong authorizer, ample funding, and a charter-friendly law and work to build a great charter sector like those in place in cities like Boston, New Orleans, and the District of Columbia. (Thus Michael Goldstein’s admonition for Nevada to find a “Neerav Kingsland,” and Neerav Kingsland’s admonition that Nevada cough up more money per child.)

But raising the achievement of disadvantaged children need not be the only project reformers undertake. Customization, flexibility, experimentation, personalization, and innovation are all important too. And as Chester Finn and Bruno Manno point out in the current issue of National Affairs, charter schools have, by and large, disappointed on these fronts. “There's a certain sameness across much of the charter world,” they write, “and (save perhaps for virtual schools) not enough real innovation.”

It’s not hard to understand why. Again, if the goal is to raise test scores and other outcomes for disadvantaged students, educators will quickly settle on a “no-excuses” model—because it works. That’s not to say that these models are all exactly the same, or that they don’t include certain innovative aspects. Yet by and large, KIPP and its cousins are obsessively improving on traditional education; they aren’t making leaps into the unknown.

The value of education savings accounts, then, is to provide a space within the K–12 system for true breakthroughs and allow for “multi-provider customization” (in the words of Matt Ladner) or “unbundling” (in the words of Rick Hess). These experiments may not yield immediate benefits in terms of increased test scores, but they might serve the needs of individual children and help us find promising breakthroughs that could someday enjoy mass appeal and application.

And what about the “S” in ESAs?

What also went largely unnoticed was the “savings” element in education savings accounts. One goal of this market-based reform is to encourage parents to shop around and choose educational providers that are both effective and efficient. This is no small thing, since K–12 education suffers from the “third-party-payer problem”: People generally ignore costs when they aren’t paying out of their own pockets. That’s the case in health care, where generous insurance plans with low copays and deductibles can encourage individuals to use more health care then they really need or choose doctors and hospitals that are needlessly pricy. Health savings accounts—the inspiration for education savings accounts—are meant to correct for this problem by giving patients skin in the game. They provide incentives for individuals to find low-cost options—or skip the doctor’s appointment when they come down with the flu.

Education savings accounts can do the same thing by encouraging families to take their children out of the public school system and purchase a variety of educational services directly, for less cost. Because the value of the ESA is less than what taxpayers are spending, per-pupil, on the public schools, it’s a win-win. (Though Rabbi Motzen is correct that it’s unfair to penalize private school parents—who are already saving taxpayers a lot of money—by making them ineligible for the ESAs.)

So who will be enticed by ESAs? I suspect it will be public school parents who (1) were on the fence about choosing private schools and for whom the $5,000 subsidy will push them over the edge; or (2) have been contemplating home schooling and see the ESA as a way to supplement home education with a variety of a la carte services.

Most of these families, I suspect, will be relatively affluent and well-educated—either capable of paying the difference between private school tuition and the value of the ESA or able to afford for one parent to stay home with the kids and play teacher. Their kids are unlikely to have extraordinary (and extraordinarily expensive) needs.

I’m perfectly fine with that. Returning to the health savings account analogy, these are people who are relatively healthy from the standpoint of education. HSAs don’t hold much appeal to people with chronic illnesses or life-threatening conditions; they would blow through their HSAs in a matter of days or weeks. Likewise, ESAs aren’t going to hold much appeal to families who face the chronic condition of poverty and for whom an extraordinary education is a matter of life and death for their children (unless they can find an excellent private school willing to charge not much more than $5,000 a year).

Yet it will be very hard for anyone in Nevada to say honestly that an a la carte education probably isn’t a great fit for families struggling with poverty. And regulators won’t be allowed to keep such families out of the program.

Therein lies the problem, and my biggest fear: What if a significant number of low-income Nevada families sign up for the initiative anyway? We’ve seen this movie before in the virtual charter school world. At the outset, companies like K12.com expected to serve mostly affluent home schoolers. (I know—I was there at the beginning.) But over time they decided to target low-income students too. The academic results have generally been catastrophic.

Regulators should pay special attention to providers that are obviously recruiting disadvantaged families—especially via “incentives” like free iPads, computers, and such. And local reform groups should be ready—and willing—to counsel Nevada’s needy families to consider other options. Thankfully, the state is embarking on a wide variety of promising reforms, from charter schools to turnarounds to tax credit scholarships. Who will have the courage to say that ESAs aren’t for everyone?