Is dumbing-down why graduation rates are up? In both high school and college? 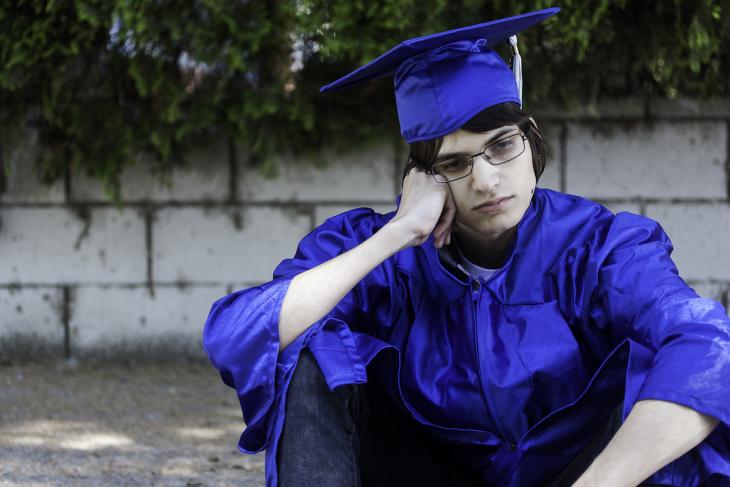 First, there’s really no constituency for higher standards and greater rigor in education. Valuable though those things are in the long run for both individuals and society, they’re painful in the short run. Everyone appears to benefit—and certainly to welcome—higher grades, more diplomas, more college going, more college degrees, and all the other accoutrements of “accomplishment,” whether it’s grounded in true achievement or is the result of grade inflation, easing off, smoke, and mirrors. It’s not just kids and families who see benefit. It’s also teachers who would far rather give A’s, philanthropists seeking payoff from their investments, advocacy organizations that can declare success, and elected officials who bask in the rewards conferred on them by grateful voters.

Second, whenever high stakes get attached to any metric, finagling of that metric follows. Whether simple inflation, corner cutting, or outright cheating, you can be certain that people will seek to harvest the rewards that follow from upticks in that metric and avoid the penalties that might befall them if it stays flat or ticks downward. That’s hardly a new insight. Indeed, it was elegantly and disturbingly formulated in 1976 by the eminent social psychologist Donald Campbell, and is simply known as “Campbell’s law”: “The more any quantitative social indicator is used for social decision-making, the more subject it will be to corruption pressures and the more apt it will be to distort and corrupt the social processes it is intended to monitor.”

(I should add that I remain fully committed to results-based accountability in education, just warier than I once was of placing huge weight on any one metric.)

With that backdrop, consider two new reports on graduation rates, one associated with high school, the other with college. The former, in my view, is so gung-ho about getting graduation rates up to 90 percent that it understates the risk that many of today’s diplomas may be pretty squishy, if not semi-fraudulent. The latter, to its authors’ credit, tiptoes into the perilous recognition that enrollment-and-revenue-hungry colleges may be making it easier to graduate.

High school first. The “Everyone Graduates Center” at Johns Hopkins is at least as much about advocacy as about research. For sixteen years, it has focused on boosting high school graduation rates and its annual Building a Grad Nation reports are boosterish, perhaps to a fault. The 2019 version, just issued, uses as primary indicators which states and groups of students have reached the 90 percent graduation rate and how rapidly are they progressing toward that target. The main message is that the country “continues to see steady, but slowing, growth in graduation rates” and quite a lot more needs to be done.

There’s much good stuff in these pages, and many sound recommendations. But there’s also cause for concern that the boosterism has caused the authors to don rosy lenses. They praise Nevada, for example, for effecting a “dramatic spike” in graduation rates by, in effect, making it much easier to graduate: For the two years of the state’s new end-of-course exams, kids only needed to take them, not to pass them, and even when they’re fully implemented, they’ll only count 20 percent toward the diploma. What’s more, those who previous failed the then-statewide proficiency exam—all the way back to 1980—will now get their diplomas retroactively!

Kudos to the authors for taking on the important question of whether recent upticks in graduation rates may be due to slipping standards and diminished rigor—and their recommendations include strong support for deeper dives into worrisome practices like “credit recovery”—but the tool they created for gauging possible slippage—called the Secondary School State Improvement Index—practically guaranteed the conclusion that “the bulk of evidence supports a picture of improvements in both graduation rates and measures of secondary school achievement.”

The index has four elements, two of which are a state’s NAEP (reading and math) results in eighth grade, which purports to show how many kids are entering high school with a reasonable level of academic preparedness. Fair enough, but what does it say about how much they learn while in high school? Nada. NAEP deserves blame here, too, for it does not systematically report any of its twelfth grade results at the state level.

The third element is how many of a state’s high school graduates scored 3 or better on at least one Advanced Placement test. This one has merit—and numbers are definitely up—but it’s compromised by the fact that AP access varies widely by state, as well as within states, indeed within districts. In 2017, Maryland high schools took AP exams at the rate of 943 per thousand eleventh and twelfth graders, for example, while their counterparts in North Dakota took 222. Also of concern is that AP is oriented to high achievers while eased graduation standards are apt to have the greatest impact on low achievers.

The fourth element in this index is the state’s own “adjusted cohort graduation rate,” which is part of states’ ESSA accountability systems; it tracks the fraction of first time ninth graders to graduate within four years. Important to know, of course, but it’s circular to use it as a gauge of academic quality when the point of the gauge is to determine whether the graduation rate has been inflated by dumbing down the diploma itself!

In short, three of the four elements seem entirely inappropriate for this purpose, and the last one—AP qualifying scores—would be a lot better if we could be sure that all high school students in a state have access to that possibility and that rising performance levels on AP had something to do with the graduation standards affecting the kids who might otherwise drop out.

The report is still worth your while. Much of its data is valuable, its conclusions often insightful, and most of its recommendations solid. But be aware that we’re a long way indeed from confidence that rising graduation rates are not in considerable part a result of slackening standards and dubious practices. Be aware, too, that the harder our accountability systems (à la ESSA) and our advocacy organizations (such as “Everyone Graduates”) press on graduation rates, the greater will be the temptation to finagle, fudge, and use elastic yardsticks. Much as NCLB once told states to set their own proficiency levels, ESSA has them set their own graduation standards—and then mostly let districts determine who meets those standards, even as there’s intense scrutiny of the resulting graduation rates. None of this should inspire confidence in “improved” graduation rates.

The college report that came out in recent days emerged not from a booster group but from sober analysts at Brigham Young University. They asked “Why Have College Completion Rates Increased?” (since the 1990s). They found that “student characteristics, institutional resources, and institution attended explain little of the change”—so they set out to see what might. Their fundamental conclusion, albeit hesitantly presented and generously qualified: “standards for degree receipt have changed.” And their explanation: “It is hard to know for sure, but the recent policy focus on college completion rates seems a likely candidate. As schools face increased scrutiny and, in some cases, increased funding incentives, they may be responding by increasing graduation rates. The lowest cost way to increase graduation rates is through changing standards of degree receipt” (my emphasis).

Maybe those who have been touting college degrees as the gold standard of educational success ought to spend a little more time investigating just what those degrees consist of. And maybe policy types and philanthropists should pay a little more attention to actual learning while in college and a little less to the paper credentials that come at the end.

In sum: We can’t rule out “dumbing down” as one explanation for rising high school graduation rates, and there’s now provocative evidence that it’s also contributing to rising college graduation rates.

Yes, there’s still something to be said for diplomas and degrees. They do “signal” something about motivation, persistence, and self-control—and in a society that looks down at those “who never graduated from high school” and that admires “college graduates,” it’s good when more people make it over those hurdles. External validation has some value. But it will have less and less value—and do those with the credentials ever less good, as the hurdles en route to them are lowered and as it becomes known that some folks are just strolling around them.

Repeat after me: There’s no constituency for greater rigor in education. And then repeat after me (and Don Campbell) that the more emphasis we put on a manipulable metric, the higher the odds that it will rise in part as a result of finagling, hedging, cheapening, faking, and legerdemain.

The ever-vigilant John Bridgeland, one of several authors of Building a Grad Nation (and overall great guy), pointed out to me that I paid too little heed to the final paragraph of the Nevada sidebar on page twenty-five and therefore erroneously characterized the authors’ view of recent changes in the Silver State. Although I continue to read the first seven paragraphs of that nine-paragraph box as a virtual how-to-do-it guide for states that want to boost graduation rates by lowering standards, it is true that the ultimate paragraph raises concerns and urges those monitoring Nevada’s new requirements “to ensure students receiving a diploma are also receiving a quality education.” I stand corrected.

Bridge (as he is known to all) has other quarrels with my description of Building a Grad Nation (and the center that produced it), but I find none of those persuasive.