With fewer than one hundred days left until the 2014 election and with control of the U.S. Senate a virtual coin toss, few are focusing on the potential impact a Republican takeover might have. Should Republicans get the keys to the Senate and gain control of both houses, they will still have find common ground with President Obama (and one another) if they are to get anything accomplished.

Regardless of whether congressional Republicans agreed with the President when he said late last year that inequality and economic mobility were the “defining challenge[s] of our time,” he clearly struck a nerve. In the last few months, several groups on the Right have offered proposals designed to put a conservative spin on helping the poor. The latest, a discussion draft from Congressman Paul Ryan titled “Expanding Opportunity in America,” has drawn praise from both ends of the political spectrum and could serve as a blueprint for negotiations over reform next year.  Here are some highlights.

Fights over debt and deficits aren’t over, but the ideas in Ryan’s “discussion draft” are budget neutral and mostly leave third-rail topics like programs for seniors and the disabled completely alone. Instead, Ryan is proposing combining a huge part of the social safety net—including funds for food stamps, cash assistance, housing assistance, and much more—into a large line item called the “Opportunity Grant.” States that wanted to participate would submit a plan describing how they would these funds, with the results closely tracked.

While Ryan certainly still wants to lower taxes for everyone, a tax-reform plan specifically targeted to the poor (who pay little in the way of income taxes) is much more likely to win the support of the president. In addition, conservatives like Ryan agree more needs to be done to help the poor but need an alternative to Obama’s insistence on raising the minimum wage, which they, and many economists, think would do more harm than good.

To accomplish both objectives, Ryan proposes an expansion of the Earned Income Tax Credit (a program that lifted 5.4 million out of poverty in 2010). President Obama has made a similar proposal, but where he would fund his plan with tax increases on the wealthy, Ryan proposes cutting corporate welfare and other spending. Both, however, would focus their efforts on a large expansion of the credit for childless adults, many of whom are out of work and could use a boost and an additional incentive to work. The EITC offers them both.

As we at Fordham often acknowledge, education reform alone won’t ensure economic opportunity for all, but we’re also nowhere near squeezing out every bit of potential from our schools. Ryan begins with early-childhood education, for which he offers appropriate skepticism, especially with regard to creating a universal entitlement (as the president would prefer). Instead, he suggests rolling childcare into the Opportunity Grant, separately block granting much of the rest (including Head Start), and funding additional research and pilot programs. 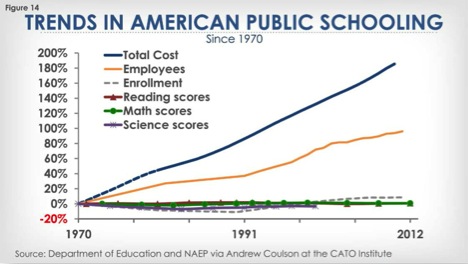 The approach for primary and secondary education is similar and is closely aligned with work in the House thus far. Title I funds would flow to participating states under a block grant in exchange for an accountability regime that would likely mostly resemble the status quo. Allowing federal funds to follow the child would bolster choice, while many other programs would be consolidated.

In higher education, Ryan highlights some of the work coming out of the House Education and Workforce Committee and proposes consolidating student aid programs, refocusing them on those who need them most. Additionally, he would revamp accreditation to promote competition and ensure that colleges and universities receiving aid “have skin in the game, to further encourage their commitment to outcome-based learning.”

Finally, Ryan would recommend combining Workforce Investment Act funds and those from other programs into a flexible grant to states. He’s supportive of the recent rare compromise on the Workforce Innovation and Opportunity Act, which makes strides in this direction.

Ryan tackles pitfalls that those looking for a path to the middle class often fall into. First he joins a growing bipartisan consensus that acknowledges that lengthy criminal sentences, overcriminalization, and the uneven application of laws can have in making it harder than necessary for those who slip up to get back on track.

In particular, Ryan highlights legislation that would give judges more discretion to hand down sentences, another bill that would require an assessment of each inmate’s needs and risks while working with the states and localities which house most prisoners. Finally he is supportive of the Hawaii Opportunity Probation with Enforcement (HOPE) program, which promises “swift and certain” punishment for parole violations, has shown promise in reducing recidivism, and has been expanded to additional states.

A second pitfall for those looking to get ahead is placed there by the regulatory state. Research by the University of Minnesota’s Morris Kleiner finds that nearly one in three people need to seek government’s permission before working. For too many, regulations such as occupational licensing are a barrier to getting a job and getting out of poverty. Ryan proposes working with states and local governments to loosen these regulations, along with others handed down by Washington, that can make it hard to find and qualify for work.

In his paper, Congressman Ryan utilizes principles that school reformers are quite familiar with: more flexibility, more accountability, and more competition through the use of outside service providers. Experience from education reform tells us that these principles are an important start but are by no means a complete solution. In his paper’s introduction, however, Ryan says his ideas are “not meant to serve as the final word” but, instead, are meant “to start a conversation all across the country.” A lot more needs to be said if Ryan is to help break Washington gridlock and, more importantly, do a better job of serving those who need help the most. But Paul Ryan’s proposals to improve economic opportunity in this country through a variety of policy reforms are a valuable contribution to this conversation.