Come on down! In Florida, the (ed reform) water's fine 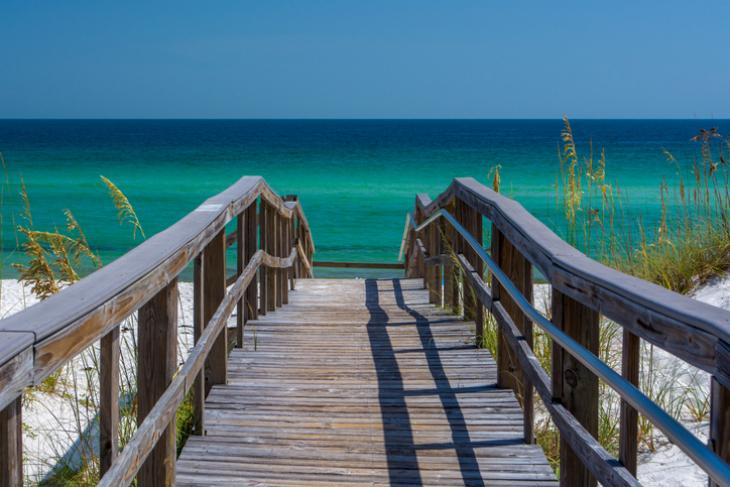 Maybe it’s all the sugar sand and palm trees, but I often feel disconnected from the gloomy national commentary on efforts to improve public education. Mike Petrilli’s recent lament, well-articulated as it was, is the latest example. Mike bemoaned a “lost decade” of achievement, “glum” policymakers and philanthropists, and “much friction, fractiousness, and furor” in the wake of failed reform.

Mike! You need a mojito! Education reform may be in a funk across America, but not in Florida. Not for education reformers who believe that expanding educational options, and giving both parents and teachers more power and freedom, is the linchpin to lasting progress.

In Florida, the past few years have been especially sunny. School choice continues to evolve into the new normal. A growing army of choice parents and teachers is increasingly visible and vocal. Policymakers continue to mash the pedal. At the same time, the evidence about academic outcomes keeps getting better.

The Florida experience suggests that putting more emphasis on accountability through choice, rather than through regulations only, will get us down the reform road further and faster. We certainly have enormous challenges in the Sunshine State, but the biggest one may be managing the pace and scope of progress. What I hear from my Florida colleagues isn’t: “How do we crank this back up?” It’s: “Can’t we slow it down a bit?”

Choice keeps expanding. Forty-six percent of Florida’s pre-K–12 students now attend something other than their zoned neighborhood schools: 300,000 use state-supported scholarships to attend private schools and pre-schools, and another 300,000 are in charter schools. The number of low-income and working-class students using the Florida Tax Credit Scholarship alone has doubled in the past five years, to 107,000 students. Meanwhile, new options continue to sprout. Florida established the nation’s second education savings account program (the Gardiner Scholarship for students with special needs) in 2014. It’s now the nation’s largest, serving 10,000-plus students last year, and running out of funding because of growing demand. The scholarship is now complemented by an online purchasing platform that we created (with lots of funding from those glum philanthropists) that will allow parents to rate schools and other providers and offer each other tons of meaningful information that goes far beyond test scores. The system, for example, will allow parents to leave the kinds of comments commonly found on sites like Yelp.

Reform keeps winning. In 2017, the left-leaning Florida Supreme Court dismissed a lawsuit filed by the teachers union in 2014 to kill the Florida Tax Credit Scholarship. That extinguished an existential threat to the nation’s largest private school choice program. From a messaging standpoint, the battle royal also backfired on the plaintiffs, giving parents, teachers, and other choice supporters opportunities they never would have had otherwise to chip away at myths and misperceptions long perpetuated by critics. We’ve made political progress, too. The teachers union initially tried to derail the Gardiner Scholarship, demagoguing the proposal as “another scheme to commercialize education” that would “blow the doors off public education.” (Must have been moonshine in those mojitos.) But since it became law, nearly every lawmaker, Democrat and Republican, has voted in favor of significant funding increases every single year. I can’t think of another “voucher” in America that has more bipartisan support.

Lawmakers keep pushing. There’s no retreat from reform here. There’s no reticence to be big and bold. Last year, Florida lawmakers created the Schools of Hope program to pave the way for more high-quality charter schools in more high-poverty neighborhoods. They also took important steps toward equalizing capital funding for charters after years in which charter school parents and teachers were treated as second-class citizens. This year, the legislature created two new scholarship programs, including an education savings account for struggling readers in public schools. You read that right: a “voucher” for students in public schools. The Reading Scholarship can serve up to 19,400 students this year, and it’s likely Florida school districts will be among the biggest providers serving them. Parents will be able to use it to purchase services from a variety of providers. They could go with private tutors, and we’re assuming many will. But many are also likely to opt to go with tutors provided by their school districts. If getting rid of artificial distinctions between public and private is another key to reform, we’re on our way.

Parents keep engaging. In 2016, 10,000 people rallied in the state capital to fight the lawsuit against the tax credit scholarship. Many were black and Hispanic parents. In states that have no choice programs or small ones, choice parents remain an abstraction. Not in Florida. Critics who lob bogus information about charters and private schools, and politicians who campaign against them, are increasingly countered by choice parents on opinion pages, at school board meetings, in the halls of the Capitol, and at the ballot box. Slowly but surely, the same is true for choice teachers. From my perspective as a former teachers union president, the choice movement must better emphasize teacher empowerment. In Florida, it’s easy to find former district teachers who now teach in charter or private schools—or in some cases, who’ve created charter or private schools—because they love the freedom to teach in ways that work best for them and their students. They’re beginning to share their stories. And once they do, their peers will begin to see choice in a whole new light.

Outcomes keep improving. Florida’s K–12 performance is better than it’s ever been. Two decades ago, we were Flori-duh. Not anymore. The Sunshine State logged in the biggest gains in the nation on the most recent NAEP after flat-lining the previous few cycles. And an Urban Institute analysis shows that, adjusted for demographics, Florida ranks highly on NAEP’s four core tests: number one in fourth grade math, number one in fourth grade reading, number three in eighth grade reading, and number eight in eighth grade math. Our AP test results may be even more impressive, with the state ranking fourth in the percentage of graduating seniors who have passed Advanced Placement exams, despite one of the nation’s highest rates of students receiving free- or reduced-price lunch. No state has a bigger differential between poverty and performance. And for what it’s worth, over the past decade, Florida has ranked no lower than twelfth on the K–12 Achievement portion of Education Week’s Quality Counts report. These are far from perfect measures. There are caveats to all of them. But taken together, it’s a sign that something here really is putting more students, particularly low-income students and students of color, on the road to success.

Fair-minded people would agree these gains are due to a combination of factors—both to top-down regulatory reforms like school grades and to the concurrent expansion of educational choice. All these programs and policies are worthy of nuanced debate and continuous improvement. But as a general rule, it makes most sense to prioritize parental choice.

There’s a constituency for choice—a constituency that is continuing to grow in size and intensity. There’s never been a grassroots constituency for more regulation, and there never will be. Parents and teachers resist and resent just about every state-imposed regulatory accountability measure, even when they work—so much so that few Floridians are willing to concede how much progress the state has made. More regulation is a recipe for perpetual conflict. But once they get a taste of the freedom and power that come with having options, they can’t get enough. A system that empowers parents and teachers, that gives them agency and ownership, is much more in sync with what we know about human motivation, and much more likely to get sustained, positive results. Regulations have a role in all choice systems, but we can’t regulate our way to excellence. If we can make the greatest progress by making choice the primary organizing principle of public education, why wouldn’t we?

To be clear, I don’t see choice as the end goal. I see it as the road to the real destination: high quality customized instruction for every student. The best way to get to the promised land of effective and efficient customization is to hand the reins over to empowered teachers and parents, not to keep it in the hands of well-meaning bureaucrats.

A mojito now and then doesn’t hurt either.

Doug Tuthill is the president of Step Up For Students.