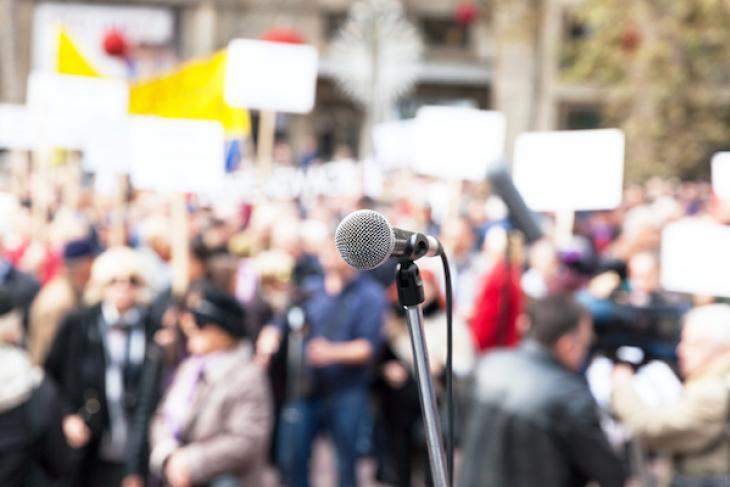 There’s much about Montgomery County, Maryland, that I appreciate—starting with the fact that it’s been a fine home for me and my family for forty-plus years. There’s also much that I respect about the Montgomery County Public Schools (MCPS) and several of its current initiatives, including greater attention to the education of gifted kids, particularly those from poor and minority backgrounds.

Yet I take strong issue with a new policy that the school board is expected to ratify in early January that, according to the Washington Post, will “allow public high school students to take as many as three excused absences a year to participate in political protests and other forms of ‘civic engagement’ during the school day.”

This, added Post reporter Joe Heim, will make my county’s school system “one of very few in the country that would formally let students take an excused day off to join marches, lead protests, lobby leaders, campaign for candidates, or otherwise partake in civic action.”

Welcome to civics education circa 2019—and welcome to the left’s encouragement of protest in Donald Trump’s America circa 2019. Take my word for the fact that the MCPS school board—like most of the county that elects it—is well to the left, in addition to being well-compensated: $25,000 annually for each member, plus sundry perks.

In the aftermath of the awful Parkland high school shooting, my colleague Robert Pondiscio wrote brilliantly about the understandable impulse of many young people to join in protests against gun violence and in support of various gun-control measures. He acknowledged and praised their wish to engage this issue and join in civil disobedience on behalf of a worthy cause. But then he added this essential qualifier:

Student civic engagement is to be encouraged, even celebrated, but that doesn’t mean it must meet with official approval. Indeed, it is essential that it does not. If students have permission to walk out, it’s no longer student activism at all. It’s a field trip. And that’s part of the teachable moment, too. The message to students should be clear: If this issue is important to you, then it’s worth the consequence. Otherwise, you’re not protesting gun violence, you’re boycotting chemistry class. By its very nature, an act of civil disobedience means the protester refuses to comply with rule, norms, and expectations. Permission, by definition, restores the element of compliance, robbing the protest of any meaning.

What MCPS is on the verge of doing is turning civil disobedience into civic engagement, placing thereon its official stamp of approval, removing all “consequence” from such actions—and getting a bunch of teenagers out of chemistry class. It’s shaving three days off their school year and leaving kids free to define almost anything they wish as civic engagement, including partisan activity. MCPS principals didn’t want to be cast in the role of deciding what is and isn’t acceptable off-campus action, or even to be responsible for determining whether participation would be safe. Nor did sundry organizations want to be bothered with giving permission to students wishing to participate. Now—assuming the revised policy gets approved in January, as expected—all students need do is notify the principal of their plans. (Their parents are also supposed to assent.)

This hands-off stance toward “civic engagement” on the part of the school system is in marked contrast to that same system’s hyper-regulatory handling of “service learning,” seventy-five hours of which is required of all students, beginning after fifth grade. There we find innumerable rules, procedures, mandates, and restrictions, such as, “All service-learning activities must be secular in nature, occur in a public place and be supervised by a nonprofit organization adult representative.”

Not so with civic engagement, the nature of which seems to be entirely up to the kids. Veteran school board member Patricia O’Neill declared—of course—that, “We want students to be prepared to be active citizens” and, in precise contradiction of Pondiscio’s key caution, argued that it’s important they not be penalized for engaging in such actions.

Once this policy goes into effect, apparently fifteen-year-olds will decide for themselves what to protest, what to demand, what to march or testify or scream in support of or opposition to. They can take on actual public policy decisions—such as hearings before the county council, the state legislature, Congress, even the MCPS school board. Or they can jump and yell at people or stores they dislike. (Sneakers and iPhones are far too expensive!) They can picket polling places and moon the cops.

It’s hard to believe it will all be serious, as these three days off might be termed “engagement” but actually morph into other things that teenagers like to do, especially when unsupervised. If the Redskins win the Super Bowl, one imagines that half the MCPS high-school enrollment will take the day off to attend the team’s victory parade, which would, after all, be a grand, unifying civic event. (They may have to claim, however, that they cut school to protest the team’s politically incorrect nickname.) Some of their engagement choices may prove risky or unsafe, as may their means of getting to and fro. And in some they will surely be exploited by others. But all will be done with impunity—and immunity—as the school system will have given carte blanche and then averted its gaze.

Meanwhile, young Marylanders are faring none too well when it comes to civic education. State policy requires that high school students take a course in American government—and also take a state-developed test in that subject. That “end of course” exam is getting revised, but when the old version was administered from 2003 through 2013, passing rates (for all test-takers in the state) ranged from 40 to 74 percent. That means a great many kids are emerging from high school in the Old Line State with very weak understanding of how government actually works.

It’s hard to believe that letting them cut high school for three days a year to do whatever they like—or whatever someone inveigles them into doing—in the name of civic engagement is going to improve their understanding of civics.

One must also weigh the possibility that adults with agendas of their own will coopt some—or perhaps a great deal—of this free adolescent labor for purposes and causes selected by the adults. Kids may innocently be drawn into projects they have little or no capacity to evaluate—but “it sounds like a fun way to spend Thursday”—and into some that may be at odds with their parents’ values. This, too, is certain eventually to lead to trouble, the more so if participation causes kids to get into trouble. (Picture them cutting school to join an Antifa riot.) Don’t be surprised if more policy changes await. In the meantime, expect goodly numbers of MCPS high schoolers—the giant district contains 45,000 of them!—to enlist, or be enlisted, in innumerable causes. Some, surely, will be left-tilting “resistance” work and political campaigns. But not all. A worried mother of Montgomery County teenagers says she’s “more concerned that these kids will be rallying around kooky ideas, fringe movements, conspiracies, etc.—just random things that they hear about and don't know much about but that sound like fun and maybe offer free food.”

The more one considers such possibilities, the better chemistry class sounds—at least to me.