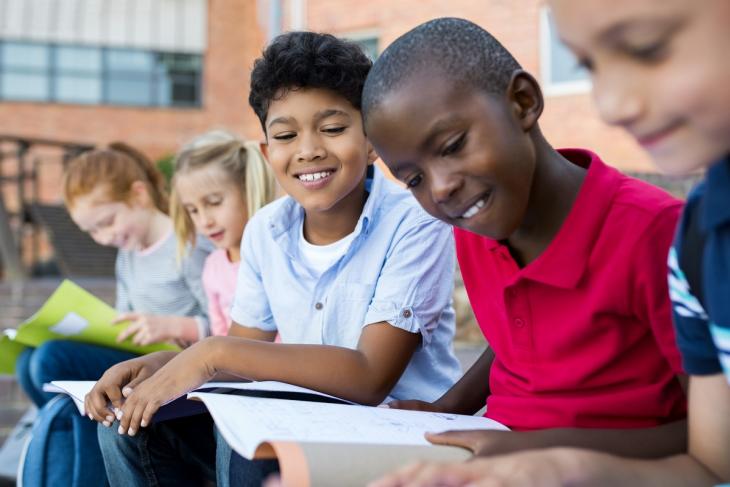 The racial integration or segregation of K–12 schools is again a debate topic in education circles. Today’s controversy has a new twist: casting charter schools as the main antagonist to integration, claiming they resegregate public schools.

This accusation obscures how three factors not controlled by charters interact to shape a school’s racial composition: housing patterns, school district boundaries, and changing school-age demographics—i.e., an increasing number of nonwhite students and fewer white students attending public schools. Additionally, many charters are specifically created to serve students in communities with high proportions of students of color, communities that are often desperate for quality schools.

Analysts at the Urban Institute have produced what Mathematica Policy Research Senior Fellow Brian Gill calls the “first credible ... methodologically strong study” describing how these factors interact. They calculate racial and ethnic enrollment for grades K–12 at nearly every public school from 1998 to 2015, examining how seventeen years of racial and ethnic data change over time when linked to four geographic units with different housing patterns: traditional school districts, counties, cities and towns, and metropolitan areas.

There are state differences. Charters in Arizona, Florida, Georgia, New Jersey, and Oregon have little or no effect on segregation. Significant segregation effects occur in Louisiana, New Mexico, North Carolina, and Oklahoma.

They also include information on school performance and programs. Those operating these systems provide families with assistance to navigate the process.

A computer process following predetermined rules (in computer-speak, an algorithm) matches schools and students. This algorithm can include criteria that varies the school’s racial, ethnic, and socioeconomic makeup.

These systems are also different from each other. For example, the number of schools parents rank on applications range from five in Denver to twelve in the District of Columbia. New Orleans provides applications in different languages. Camden and Indianapolis do not. Some systems (Denver, for example) are operated by the school district. Others are operated by local nonprofit organizations, as in the District of Columbia.

Another promising charter strategy is diverse by design schools. The recruitment efforts of these charters are designed to reach specific families, students, and geographic areas, giving preference (or weighting) to factors that attract a mix of students.

The Diverse Charter School Coalition represents over 175 schools enrolling 50,000 students. Its members affirm that “charter schools can and should contribute to solving the historic challenge of integrating our public-school system.” Its School Launch Program recruits and prepares school leaders for new diverse-by-design schools. The Century Foundation found that one in five charter schools nationally demonstrated some consideration of diversity in its school model, and one in four had medium or high enrollment diversity.

An example of this diverse-by-design school is Rhode Island’s Blackstone Valley Charter School Prep, opened in 2009 after Democratic Mayor Daniel McKee of Cumberland, now Rhode Island’s lieutenant governor, led a regional coalition to create the school. It operates three elementary schools, two middle schools, and one high school, and it is home to 2,100 students and 300 teachers. This regional model recruits students from a broad geographic area: the more affluent communities of Cumberland and Lincoln and less affluent communities of Central Falls and Pawtucket.

Charter schools are not the main antagonist in today’s school integration/segregation controversy. They are at the mercy of existing housing patterns, school district boundaries, and changing school-age demographics. Innovations like common enrollment and diverse-by-design schools, pioneered by the charter sector, point to new ways to integrate America’s K–12 schools and advance equal educational opportunity.

Editor’s note: This essay was first published by the Washington Examiner.