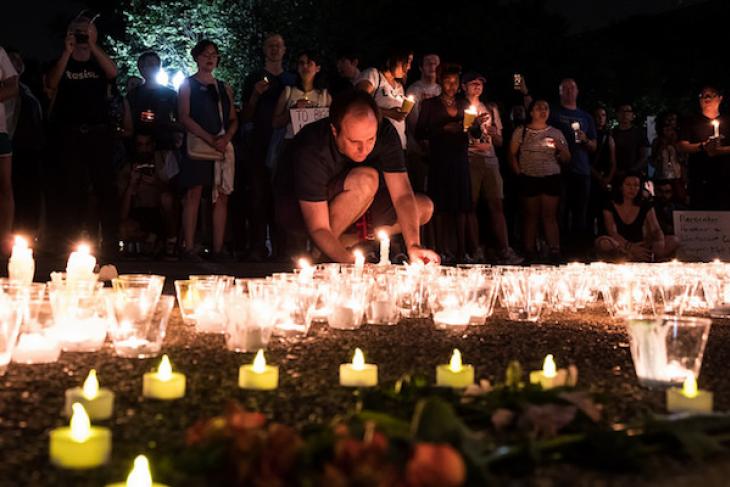 My memory is a little hazy, but I’m pretty sure the first time I heard the term “Nazi” was when I was nine or ten and watching the “Blues Brothers” on TV. All I remember is that the neo-Nazis were having a parade, and getting in the Blues Brothers’ way, and the whole thing was treated as farce. They were clearly a bunch of losers and idiots, not even worthy of fear. They were a punchline, the butt of a joke.

Of course, as I got older, the ugly, evil reality of Nazis, the KKK, and white supremacists became clear to me, thanks in large part to Mr. Klein at Parkway West Senior High School, and his World History and AP U.S. History courses. I’m pretty sure Mr. Klein didn’t just care about making us “college and career ready”; he wanted us to understand the full scope of humanity’s history, both the wonders of our cultural achievements and the depravity of totalitarianism. Today I feel a special sense of gratitude for Mr. Klein, and all his compatriots in social studies departments across the country, who gave us the gift of understanding the beauty, and evil, of which humans are capable.

So it was that the image of a mob of angry white men carrying torches in front of a church in the Old Dominion touched a nerve, and triggered an immune response among Americans far and wide. And that the cowardly attack on peaceful protesters by a homegrown terrorist brought to mind Selma and Montgomery, not to mention Oklahoma City.

Vice President Pence finally said the words appropriate to the horrific events: “We have no tolerance for hate and violence from white supremacists, neo-Nazis or the KKK,” which he called “dangerous fringe groups.” President Trump should say those words himself (update: he more or less just did), should make it clear that these groups are full of losers, that he wants nothing to do with them, that they aren’t welcome in American public life or in the Republican Party or the conservative movement.

And he should tell Americans of all backgrounds, but especially the descendants of slavery and the relatives of Holocaust survivors, that he appreciates the pain and suffering triggered by these idiots, these losers, these terrorists, with their torches and their angry chants. That he understands history and will not let it repeat itself, not on his watch.

As for the rest of us, let’s try in the days ahead to treat each other with a little extra love and compassion. And if you feel despair, read some history, and be reminded that the idiots are a small minority, that most of our fellow citizens have good hearts, and that evil is no match for America.