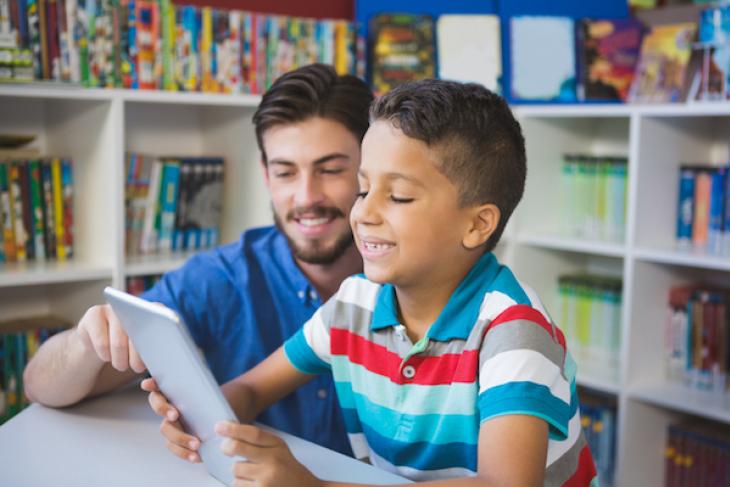 I am 200 percent in favor of personalized learning, defined as enabling every child to move through the prescribed curriculum at his or her own speed, progressing on the basis of individual mastery of important skills and knowledge rather than in lockstep according to age, grade level, and end-of-year assessments. (I’m 200 percent opposed to the “let everyone learn whatever they want to whenever they want to learn it” version.)

There is nothing beneficial to kids about declaring that every ten-year-old belongs in something called “fifth grade” and that all will proceed to “sixth grade” when they get a year older, get passing marks from their teachers, and perform acceptably on “grade-level” tests at year’s end.

That’s not how it worked in the one-room schoolhouses of yesteryear, and it’s oblivious to the many ways that children differ from each other, the ways their modes and rates of learning differ, how widely their starting achievement levels differ, and how their interests, brains, and outside circumstances often cause them to learn different subjects at unequal speeds—and to move faster and slower, deeper or shallower, at different points in their lives, even at different points within a “school year.”

Yet we’ve organized conventional schools in an industrial model and we batch-process students in ways that made sense to “cult of efficiency” experts circa 1920, that lent themselves to uniform teachers delivering a uniform curriculum to groups of twenty to thirty same-age pupils in more-or-less identical classrooms during a six-hour day and 180-day year that made perfect sense for a country that lacked air conditioning and that wanted to standardize the school year.

Now we live in a post-industrial age. Technology surrounds us. Moms work—and less and less is standardized. Our demographics are more diverse than any country has ever experienced in the history of the world. Individualism, personal preference, and choice characterize almost every other aspect of our lives. We have hundreds of TV channels instead of three. The world is at our fingertips via the Internet. And we want every child to maximize his or her potential in life, not linger at some “grade level” defined by averages. That means, among other things, enabling motivated and high ability youngsters to go as fast and far as they can, while giving ample attention to kids who—for a thousand reasons—must struggle (and take additional time) to prepare for the adult world.

Personalizing our approach to K–12 education—and, while we’re at it, to pre-K and postsecondary education, as well—makes all the sense in the world. Hats off to Chan-Zuckerberg and others now striving (and investing) to make that real.

But my goodness, how tall are the barriers that we’ve built and that they’re going to have to overcome if personalized learning is to prevail.

First and most obvious, we’ve organized the entire, massive K–12 system around an age-based, grade-level, 180-days-per-year calendar; around mostly self-contained and generally low-tech classrooms; and around a pedagogical model centered on a single teacher teaching a uniform curriculum to twenty to thirty children for a prescribed amount of time each day, children who don’t have much in common except that they’re more or less the same age and (usually) live in pretty much the same community. We’ve constructed a hundred thousand schools that way; we’ve trained nearly 4 million teachers to do their best in that kind of structure; and we’ve socialized the families of some 55 million youngsters into believing that “that’s what school looks like and that’s how it works.” (Such socializing wasn’t hard inasmuch as most parents went through the same arrangement.) Many earnest efforts to foster school choice, blended learning, and differentiated instruction have nibbled away at the edges of this arrangement, but it’s staggeringly durable. Immense adult interests now depend on that arrangement not changing very much, except (of course) for spending a bit more every year.

Another major reason it endures—and another huge obstacle for the personalizers—is public complacency. Besides expecting children to attend schools that resemble those of their parents (and grandparents), we have ample evidence from a hundred surveys that most Americans are pretty content not only with those schools (at least those they know best) but also with the system as a whole. Those who are discontented can opt into something (slightly) different if they’re wealthy; if discontented and poor, however, they don’t have (or, in many cases, even expect to have) any real alternatives.

Compounding the problem, many of the most potent and best-loved education reforms of recent decades have bought into and now rest upon the same basic structure. Most obvious are grade-level academic standards with assessments and accountability systems aligned to them. Because the fifth-grade standards, for example, are meant to apply to almost every ten-to-eleven year old, we hassle endlessly over whether they should be low enough for most kids to achieve or high enough to point toward readiness for the real world, but practically nobody deviates from the underlying assumption: Ten-year-olds belong in fifth grade and the state should set uniform academic standards for fifth graders in core subjects, standards that apply to every fifth-grade public-school classroom and that form the basis of a high-stakes accountability system that educators are admonished to take seriously.

Yes, by all means, let’s personalize learning. It’s the right thing to do, it’s no secret how to do it, and the materials are at hand. But doing this right will either take a hundred years into the future or demands an education earthquake that will demolish almost every structure we’ve built over the past hundred years.