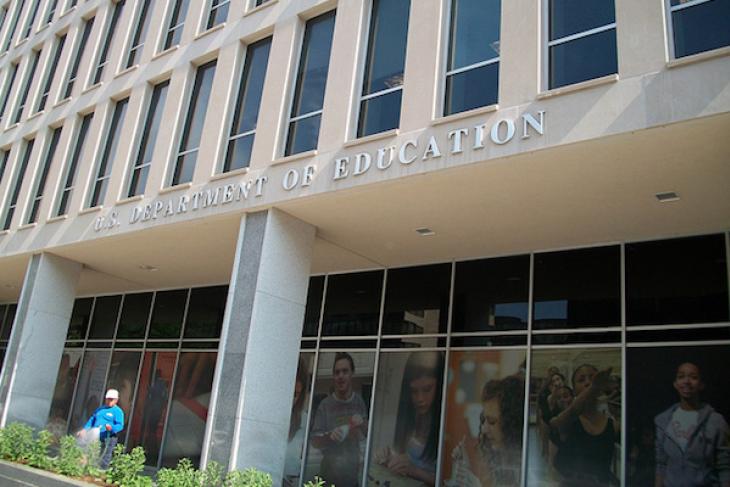 Just when they were starting to hit their stride, the new team at the Department of Education made a big unforced error this week. The good news is that it’s almost certain to be corrected, thanks to pressure from Capitol Hill.

The issue is the wonky but important feedback that Jason Botel, the acting assistant secretary for elementary and secondary education, provided Tuesday to three states regarding their ESSA plans. (Eventually the Department will provide feedback on every state’s plan, but these are the first.) Much of it is boring bureaucratic minutia—pointing out areas where Delaware, Nevada, and New Mexico need to supply additional information in order to be compliant with the federal law. That’s fine and unexceptional.

However, Botel and company demanded changes to Delaware’s plan on grounds that several of its provisions are not allowed under ESSA. I think the DeVos team is misreading the law, the substantive issues, and the politics, especially after the Secretary has repeatedly promised to provide states wide latitude in implementing ESSA.

At issue are two aspects of Delaware’s proposal:

In its State plan, DDOE proposes to decrease the percentage of non-proficient students in each subgroup by 50% by 2030, which would result in no more than half to two-thirds of certain subgroups of students achieving proficiency. Because the proposed long-term goals for academic achievement are not ambitious, DDOE must revise its plan to identify and describe long-term goals that are ambitious for all students and for each subgroup of students.

Where to even begin? The goals that Delaware submitted in its ESSA plan are extremely ambitious, almost irresponsibly so. In the course of a single generation of students, for example, Delaware is aiming to increase the math proficiency rate for Latino students from about 30 percent to about 65 percent. No state in the country has ever made that kind of progress—and that’s not ambitious enough?

As Ronald Reagan once said, there you go again. Did we learn nothing from No Child Left Behind’s utopian goal of hitting 100 percent proficiency within thireen years? We know how that story ended—if it didn’t lead to a “race to the bottom,” it surely encouraged states to keep their standards for proficiency exceedingly modest. The only way Delaware and other states could achieve the “ambitious” goals that Uncle Sam seeks would be to lower their standards and embrace the dishonesty gap once again.

Do the feds even have the authority to second-guess states on their goals? All ESSA says is that states shall “establish ambitious State-designed long-term goals.” That sort of vague statement is precisely the kind of language that usually gets embellished by regulations, which in this case might add clarity as to what it would take for states to meet the “ambitious goals” standard. (For example, states might be asked to explain how they came up with their goals. Were they informed by an analysis of the data?) But with the encouragement and signature of the President, Congress famously repealed the Obama Administration’s ESSA regs, and the Department hasn’t had the time or inclination to replace them. Federal agencies aren’t allowed to use policy letters like this one to shortcut the lengthy but necessary notice-and-comment process required for formal rulemaking.

Perhaps Secretary DeVos’s lawyers would argue otherwise—that she and her team have the authority to decide whether a state’s goals are ambitious enough. But this sure smacks of the executive overreach, and trampling of state decision-making, that many of us complained about when Arne Duncan was practicing it.

The other big mistake came in the Department’s handling of Delaware’s College and Career Preparedness indicator. Botel writes:

In its State plan, DDOE proposes to include performance on Advanced Placement and International Baccalaureate examinations in its College and Career Preparedness indicator. If not all high schools in the State offer Advanced Placement or International Baccalaureate classes and if, within a school that does offer those courses, a significant percentage of students do not participate in the examinations, then this measure is not statewide or comparable, nor does it allow for meaningful differentiation among all high schools in the State. DDOE must describe a School Quality or Student Success indicator that can be measured statewide and is comparable for the grade spans to which the indicator applies and that will allow for meaningful differentiation in school performance.

Huh? The law explicitly states that states can include, as a “School Quality or Student Success” indicator, “student access to and completion of advanced coursework.” It’s right there in black and white! Where did ED come up with the rule about states only getting to use this measure if all high schools in the state provide access to AP or IB, and if a “significant percentage” of students participate in the exams? This appears to be another example of rulemaking via letter writing.

In fact, virtually everything that Delaware, and other states, are putting in “college and career ready indicators” are going to fail a test of “statewide access.” Career-tech high schools, for instance, will offer lots of opportunities to attain industry credentials, but won’t offer AP or IB. It will be the opposite for traditional college-prep schools. That’s why it’s smart to combine several of these measures into one indicator, so that students—and their schools—have several different ways to demonstrate their readiness for what comes next.

And what if Delaware and other states follow ED’s dictate and measure access to AP and IB but not performance on their associated exams? This would signal to schools that they should flood AP and IB courses with more kids, regardless of level of readiness, and then ignore the outcomes. That might encourage equal access, but it sure won’t help us achieve excellence or boost true college readiness. And it’s terrible for high-achieving students, especially low-income kids in high-poverty schools, who are the most likely under such a policy to see their AP and IB courses slowed and diluted by peers who aren’t ready for the rigor.

No doubt, some on the left will be happy that Betsy DeVos and company aren’t “rubber stamping” state ESSA plans. But judging by the conversation on Twitter, even alumni of the Obama Administration are having a hard time justifying these moves. Republicans on Capitol Hill, meanwhile, are likely to raise holy hell.

Secretary DeVos will almost certainly walk this back. I don’t see any other option if she doesn’t want to spend every remaining day of her tenure getting lectured by Congressional Republicans about executive overreach and states’ rights. It’s not the end of the world. Mistakes happen. The bigger tragedy would be letting this goof on Delaware set policy for all fifty states. Please, Madame Secretary: Correct the error and move on.