Betsy DeVos is wrong about accountability for schools of choice 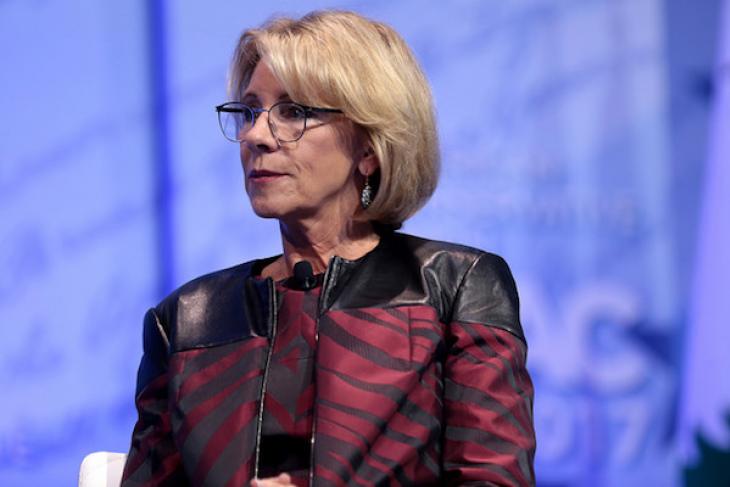 Accountability for schools of choice is a topic forever in the news—and in dispute. The latest combatant is none other than Education Secretary Betsy DeVos, who made clear in a recent interview with the Associated Press that she favors letting the market work its will and trusting parents to judge whether a school is worth attending. In this context, she was referring specifically to private schools insofar as they participate in publicly financed voucher or tax-credit-scholarship programs. (Yes, yes, I understand the argument that if it’s done via tax credits it’s not actual public financing. But that begs the political and policy questions that dog such programs and those who want more of them.)

When it comes to charter schools, the Secretary acknowledged that authorizers play a role alongside parents, though she picked the dubious case of Michigan, her home state, to illustrate the point. The Wolverine State certainly has some top-notch authorizers, and they have indeed closed down some failing charter schools, yet the overall track record of Michigan charters is too spotty—at least in the eyes of those who value academic achievement and fiscal probity—to warrant citing it as a stellar example of quality control via authorizing.

Back in June, I unloaded on the authors of a recent CER volume on charters’ “freedom, flexibility and opportunity” because of their support for a market-only accountability system. Indeed, I termed it “idiocy,” and a bunch of folks jumped all over me for using that blunt term. But I also deferred for later the admittedly gnarlier issue of whether the market is sufficient when the schools involved are private yet the funding involved is arguably public.

Later is now, thanks to the AP and Secretary DeVos taking the matter off the table. Here’s what she had to say about it:

I think the first line of accountability is frankly with the parents. When parents are choosing [a] school they are proactively making that choice. And schools are accountable to the parents. And vice versa, the students doing well and working to achieve in the schools. I think it's important for parents to have information about how their students are doing, how they're achieving, how they're progressing. And that kind of transparency and accountability I think is really the best approach to holding schools accountable broadly. It starts with holding themselves accountable to communication of relevant and important information to students and parents about how they are doing. And we know from, that when parents choose and they are unhappy with whatever the school setting is they will choose something different. And that's the beauty of having choices.

Parents as first line of defense, sure, although she appears to trust the schools themselves to equip the parents with the information they need to make competent decisions. There’s no sign of any sort of impartial data source.

But where’s the second line of defense? She never gets around to one, not to anything akin to authorizing in the case of charters or “protective services” or audits in the case of private schools that may be committing educational abuse or financial fraud. (For that matter, she doesn’t even mention such rudiments as health and fire codes.)

For me, this approach just doesn’t cut it, not when we’re talking about publicly authorized and funded programs intended to educate needy children in whose educational success there is a strong public (as well as private) interest. Where’s the school equivalent of the FDA or Department of Agriculture, enabling parents to see the ingredients on a can of beans and to be sure that the chicken in the grocery case is not contaminated with salmonella?

At Fordham, we’ve spilled a lot of ink over this issue in recent years. After much thought, research, and palaver, we’ve ended up firmly attached to a trinitarian approach to private-school accountability in cases of publicly-supported choice programs.

We recommend that states:

We’re painfully aware that this kind of comparability and transparency does not always advance private-school choice in the sense of persuading people that there should be more of it. Several recent evaluations of voucher programs that use such publicly available assessment data—including one sponsored by Fordham—have yielded mixed or negative results in terms of the academic efficacy of participation in such programs.

Sobering, yes, and if we were single-mindedly dedicated—as perhaps Secretary DeVos is—to expanding and extending access to such programs, we might back off from results-linked accountability. In the long run, however, it’s better for choice, for kids, for taxpayers, and for the country’s economic vitality and social mobility that we continue to insist: No school, public or private, is a good school unless its students are learning what they should. And where public policy and public funding are concerned, what kids should learn is a matter of public interest and so are the results that their schools are—or aren’t—producing. It would be wonderful if the parent marketplace were a sure-fire mechanism for gauging and producing those results. Sadly, it simply isn’t. Which is to say, again sadly, Secretary DeVos has this one wrong.