Arne Duncan, Lamar Alexander, and the rule of law 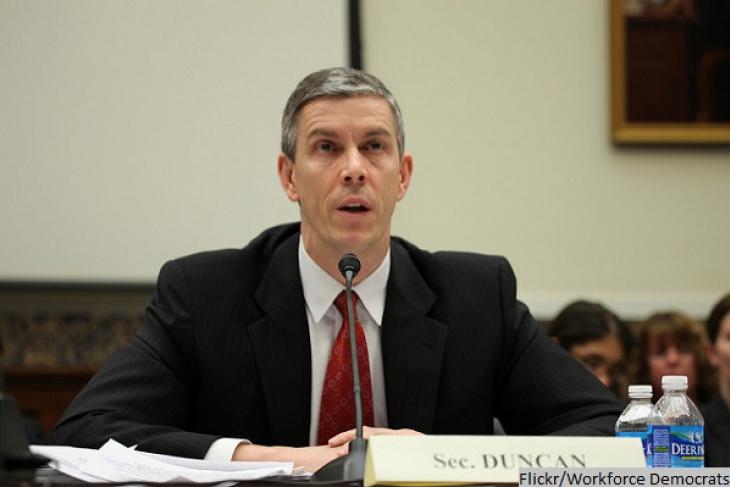 Over the weekend, I attended a performance of the Tony-winning show All the Way, whose title political junkies (or readers of a certain age) will know refers to Lyndon Johnson and his 1964 presidential campaign. The play was entertaining and enlightening, depicting President Johnson as a funnier, more likable Frank Underwood—with the salty language and some of the paranoid tendencies of Richard Nixon.

What I found most fascinating, though, was its treatment of detractors of the 1964 Civil Rights Act—most notably Johnson’s mentor turned political opponent, arch-segregationist Senator Richard Brevard Russell of Georgia. The wise and amiable “Uncle Dick” knew that he and his fellow southern Democrats couldn’t attack civil rights head on. In one scene, he tells a handful of his compatriots that, instead of playing to type as rednecks and defenders of brutal racism, they have to make their argument on Constitutional grounds. The refrain of his speeches became, “This bill is an assault on the states and on our Constitution.”

That came to mind on Monday when I had the chance to ask former Secretary of Education Arne Duncan about the mounting controversy over implementation of the Every Student Succeeds Act (ESSA)—a sixth- or seventh-generation descendant of L.B.J.’s Elementary and Secondary Education Act of 1965.

Recall: On his way out of office in December, Duncan tried to make the case that ESSA represented a victory for the administration, even though virtually all analysts saw it as a repudiation of President Obama’s and his own education agenda. In particular, just about everyone views ESSA as returning significant authority to the states and tying the hands of the federal Education Department. It’s the predictable (some would say inevitable) reaction against what many saw as the federal and executive overreach of the Obama years.

So it was big news when Duncan told Politico that the repudiation thesis was misplaced because, “Candidly, our lawyers are much smarter than many of the folks who were working on this bill.” Meaning that crafty attorneys at the Department of Education are a lot smarter than folks on Capitol Hill and would find ways to interpret the act to allow for a continuing, expansive federal role.

Fast-forward a few months and Duncan’s successor, Secretary John King, seems intent on proving the point. In a draft regulation regarding ESSA’s “supplement, not supplant” language, King’s team posited that school districts around the nation would need to prove that they spend as much money on high-poverty schools, on average, as they spend on more affluent ones—even though Congress had explicitly debated that policy and rejected it.

For this and similar actions by the writers of draft regulations, Senator Lamar Alexander, chairman of the Health, Education, Labor, and Pensions committee, upbraided King at an oversight hearing last week. It’s worth quoting from his opening statement at length:

It wasn’t easy to pass a law. There were crocodiles at every corner of the pond.

One of those—and I see Senator Bennet here, and we had vigorous discussions over this—was the issue of “comparability.” That’s a provision that was put into the law first in 1970. It says school districts have to provide at least comparable services with state and local funding to Title I schools and non-Title I schools.

But the law also says that school districts shall not include teacher pay when they measure spending for purposes of comparability.

Ultimately, the United States Congress made two decisions about this issue, as reflected in the law we passed last year.

First, we chose not to change the comparability language in the law, so the law still says teacher pay may not be included in that computation.

And second, we added a reporting requirement—that school districts report the amount they spend on each student, including teacher salaries, so that parents and teachers could know what’s being spent and could make their own decisions about what is fair and what is equitable, rather than the federal government mandating it.

One thing that the law that the president signed in December did not do was change the requirement that says teacher salaries may not be included when you’re computing comparability.

But here’s what your department did on April 1.

If that were adopted, your proposal would require a complete, costly overhaul of almost all the state and local finance systems in the country, something we did not pass in the law.

It would force teachers to transfer to new schools, something we did not pass in the law…

Now, I’m not interested today in debating whether it’s a good idea or a bad idea to include teacher salaries when computing comparability—the plain fact of the matter is that the law specifically says the department on its own cannot do it…

Now, according to a Politico story published on December 18, the former secretary of education said: “Candidly, our lawyers are much smarter than many of the folks who were working on this bill.”

I don’t know whether that means the twenty-two senators on the committee, or all of the staff sitting behind us.

I am not sure how smart we are, but we’re smart enough to write a law in plain English, and we’re also smart enough to anticipate that your lawyers would attempt to ignore what we wrote and try to move around it.

So we included specific prohibitions in the so-called “supplement, not supplant” provision that would prohibit you from doing the very things you are proposing to do.

Section 1118(b)(4) says, “Nothing in this section shall be construed to authorize or permit the Secretary to prescribe the specific methodology a local educational agency uses to allocate State and local funds.” And Section 1605 said, “Nothing in this title shall be construed to mandate equalized spending per pupil for a State, local educational agency, or school.”

So on Monday, when I had the chance to ask Arne Duncan a question at a Georgetown University event on school finance, I queried him on two points. First, I asked if he wanted to apologize for his “smarter lawyers” comment. And second, I pushed him on whether he agreed that John King was overstepping the clear language of ESSA. Here’s how Politico reported his response:

Former Education Secretary Arne Duncan offered to roll back a previous comment that the Education Department's lawyers are smarter than lawmakers on the Hill, but not before casting doubt on the true intentions of senators using his statement as a "smoke screen" this afternoon.

"It's all adult drama. And we can have honest debate on lots of things, but where is your heart coming from? What's your true motivation? I doubt the motivations of some," he said.

Follow this line of reasoning and you observe that Duncan is—almost certainly without intending to—depicting Lamar Alexander as the reincarnation of Richard Russell: just another politician who is smart enough to downplay his true “motivations” and who relies on constitutional arguments to keep the arc of history from bending toward justice.

This is, to use technical terminology, total and complete BS. Former Education Secretary Lamar Alexander has at least as much credibility on the topic of education reform, and on his commitment to poor and minority kids, as former Education Secretary Arne Duncan. But he also believes in the rule of law, the separation of powers, and the duty of the executive to “faithfully” implement the language that the people’s representatives in Congress write.

In the same Georgetown talk, Duncan decried the “dysfunction” in Washington. But surely impugning the “motivations” of our political opponents doesn’t help to add function. What might?

First, it seems that conservatives might usefully acknowledge the ugly history of some “constitutional” arguments, including the intermittent misuse of “states’ rights.” It’s a fact that Southern politicians—nearly all Democrats in those days—used that rhetoric first to block and then to slow the march toward civil rights—the march to ending discrimination in education, public accommodation, employment, and more. We ignore that history at our peril, and we shouldn’t be shy about deploring it.

Second, liberals should understand that just because constitutional arguments have occasionally been used to defend the indefensible, it doesn’t logically follow that all such arguments are wrong. The Founders got a lot right, and we’ve benefited from their wisdom for more than two centuries. We are, in fact, a nation of laws. We have a Constitution that takes great pains to establish a separation of powers within government. Two separations, actually; one among branches of the federal government, the other between Uncle Sam and the states. Rather than attack the “motivations” of those who read a law like ESSA differently, liberals might agree to disagree with their opponents and not or try to outfox them.

Secretary Duncan returned to Washington this week and had the chance to turn down the temperature. Instead he threw another log on the fire of our white-hot partisan wars. All the Way.