More than twelve million American students exercise some form of school choice by not attending a traditional public school and instead going to a charter, magnet, or private school, or opting for homeschooling. Countless others are doing so using district-wide lotteries, attendance waivers, or interdistrict transfers to attend public schools other than the one in their neighborhood.

But some cities are significantly more “choice-friendly” than others…and some are downright hostile. Using nearly fifty markers of “choice friendliness,” we show which American cities—thirty in all—are the best and worst for school choice.

What makes a city choice-friendly?

Politics reigns supreme: Is the city council supportive of choice in Newark or Chicago? Does the superintendent in San Diego advocate for choice? How about the one Atlanta? Here we get the lowdown from observers in each city about whether their political heavy hitters support school choice.

It’s nearly impossible for choice to flourish without supportive policies and practices. Here we examine topics like whether the city’s major school district has a policy for closing schools with low enrollment. In fact, sixteen do. One is Chicago. And, how easy is it for parents to apply to schools of choice? (Answer: Not very, unless you're one of the six cities with a broad common application).

Third, the QUANTITY AND QUALITY of choices:

The question of how many choices exist for students—and if they are any good—obviously matters a great deal. Here we examine factors like whether students are allowed to attend schools in nearby districts. And if so, can the district choose to say no by opting out? That’s the case in Oakland. Perhaps you’d like to know where else?

As you’ll read, some cities’ overall rankings come as no surprise—the gold, silver, and bronze go to choice hot-spots New Orleans, Washington, D.C., and Denver. Albany ranked dead last. But New York City, a roaring engine of choice under Mayor Bloomberg, is now sputtering and fails to crack the top ten (blame the “de Blasio effect”). And how did Atlanta—marred by a cheating scandal--end up surprising us in the ninth position?

There's lots more to learn in this most comprehensive look at urban school choice to date.

Each city is profiled as follows. Download the report to learn more about each city’s ranking. 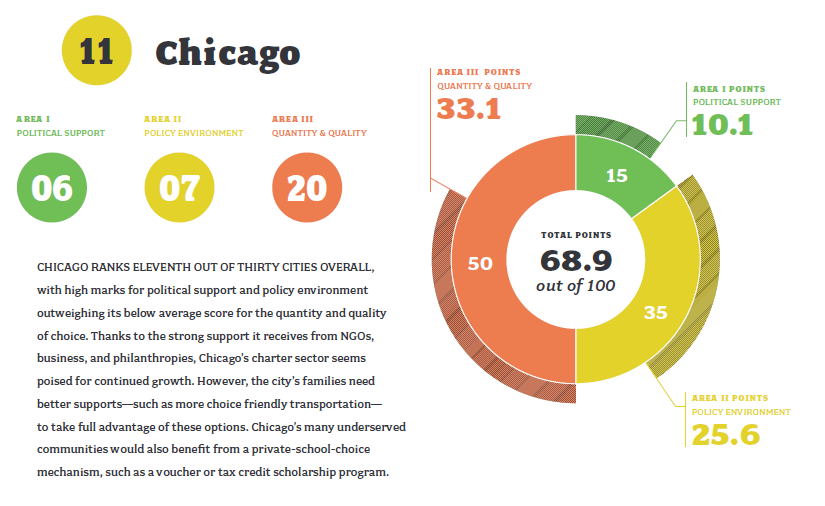