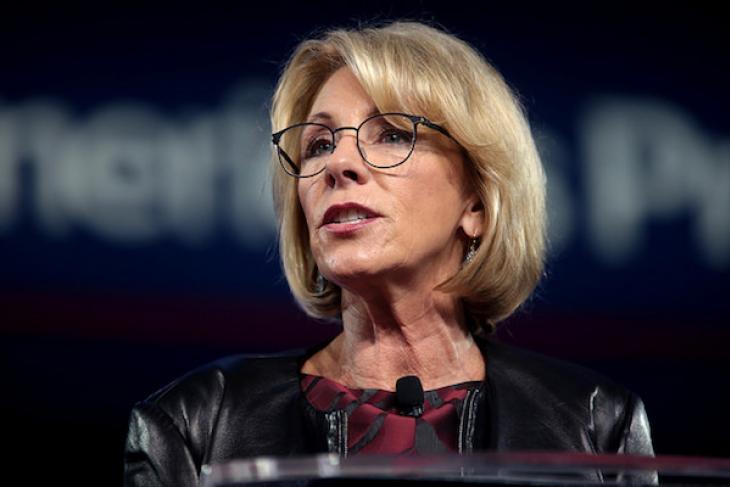 Few people would disagree that Secretary DeVos's tenure is off to a rocky start. Much of this is not her fault; working for President Trump is proving to be a challenge for just about everyone, all the more so in a field where he is so widely despised. Some sort of restart is clearly needed.

To get ideas about what that might look like, I reached out to five friends, all of them public relations professionals who work in education. They have served Democrats and Republicans, previous Administrations, and officials at the local, state, and federal levels. Here are their thoughts. We’ll start with a few who asked to stay off the record.

I’d suggest a couple of things:

Secretary DeVos needs serious, intense media and presentation training. She is not ready for prime time and as such is prone to what I would call "brain freeze." She has never been in the spotlight, and so she went from philanthropist to a serious politician overnight with no real training. In order to gain the confidence she needs, I recommend lots of dry runs with professional feedback and time spent with experts in the field who do not have a vested interest in her decisions, but who have the history and perspective she needs to hear in order to trade in her taking points for real understanding.

One thing I know from twenty years of education communications: My PR tools can’t fix your policy problem. Secretary DeVos’s challenges with a number of constituencies—the civil rights community, teacher unions, or reformers who aren’t hypnotized by the allure of vouchers—aren’t the result of a messaging gaffe. The bear jokes were entertaining, but that’s not her problem. Her problem is the public’s perfectly logical reaction to her policy point of view. If the secretary wants to elicit more positive responses from the public that pays attention to schools, she will need to revisit her policy platform: a full-throated endorsement of the principle of public schools, a clear understanding of the nuance and research around choice, and a renewed emphasis on universal accountability measures that can’t be gamed by state or local leaders.

First, offer a strategy. A budget is not a strategy. In the absence of knowing what Secretary DeVos intends to do, we are all making assumptions based on the budget. School choice is but a piece of that strategy. Without it, DeVos's opponents are driving the narrative.

Second, staff up. It's been three months since her confirmation. We still don't have a nominee for under secretary, deputy secretary, or assistant secretaries for those areas we most care about.

And third, get out of the bubble. DeVos's speech at Bethune-Cookman was an important step in this regard. She owns the bully pulpit. Use it. And use if for more than friends like charter schools or GSV-ASU. Go to ISTE next month to talk innovation and ed tech, just as she did at GSV. Talk higher ed and student loans at SHEEO in July. Go to NGA to talk to the governors about ESSA implementation. If one is particularly bold, ask for a speaking slot at AFT. Use it to emphasize the areas of agreement and the value of meaningful disagreement.

Right now, the Department of Education simply isn't engaging in public engagement. It isn't that they aren't good at it, it's that they aren't doing it at all. Stop playing only defense. Stop letting opponents define the terms of engagement. Stop retreating. Use the bully pulpit. Speak on important issues like career and technical education, community colleges, and early childhood education. Expand the reform discussion to include teacher prep and higher education accountability. Use the one hundred days of summer to prepare a bold plan for improving education, to be launched at the start of the school year.

In a phrase I would say, “Swim where the water is warm for now.”

And now a few action steps: