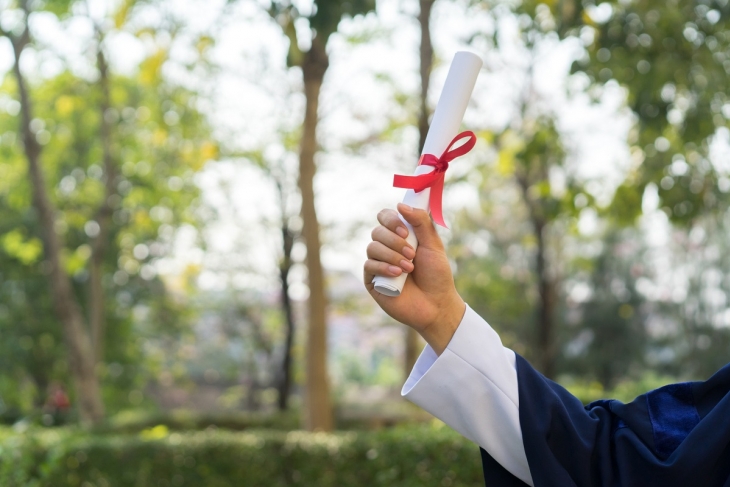 First, some brief background on the long road to our current graduation requirements. Back in 2014, the state passed House Bill 487, which gave students in the class of 2018 and beyond three pathways to a diploma. The primary route required students to earn points based on their scores on seven end-of-course (EOC) exams. The remaining two paths allowed students to earn a diploma either by completing career and technical education requirements or earning remediation-free scores on college readiness assessments.

These new requirements passed without much fanfare, and were considered to be rigorous but attainable standards. By 2016, though, several education groups had changed their tune. District leaders claimed that the EOCs were too rigorous, and that Ohio would soon face a “graduation apocalypse” because students weren’t capable of passing the assessments. The legislature responded by temporarily weakening graduation requirements, allowing students to earn a diploma based on non-academic measures like attendance, work experience, or community service. Advocates for high standards—including Fordham—pushed back, and a years-long battle ensued.

The debate finally came to a close in 2019, when the last state budget enshrined into law a new and permanent set of requirements that went into effect with the class of 2023. In addition to earning twenty credits in certain subjects, students must earn competency scores on two EOCs (one in math and one in English), fulfill career and technical education criteria, or meet military-readiness targets. They must also earn at least two diploma “seals,” which are designed to give students an opportunity to demonstrate skills that align with their particular interests. High schoolers are free choose which of the twelve approved seals they wish to pursue, but one of them must be state-defined (as opposed to a locally-defined seal with standards set by a district). Taken together, these new requirements set high but attainable expectations for students while also providing a variety of ways for them to demonstrate their competency.

Unfortunately, the recently proposed budget takes an axe to this hard-fought compromise that was put into law only two years ago. The bill makes several changes to graduation requirements, including to the social studies (referred to as citizenship) and science seals that students can earn. Under current law, a student can earn a citizenship seal in one of three ways:

The budget, however, would allow students to obtain a citizenship seal by earning a final course grade of B or higher in American history and American government courses offered by their high schools. Such grades would take the place of proficient scores on the EOCs for both these courses. The same change has been made to the science seal requirements. Rather than demonstrating proficiency on the biology EOC administered by the state, students need only earn a B or higher in one of a laundry list of science courses offered by their high schools, including chemistry, physics, physical science, advanced biology or other life sciences, astronomy, physical geology, or other earth and space science courses.

The upshot? Rather than asking students to demonstrate that they’ve mastered science and social studies content on an objective assessment that’s either aligned to state standards (EOCs), nationally recognized (AP or IB exams), or based on college-level content (CCP), state leaders only want to require a grade of B or higher in high school courses that students are already required to pass for graduation.

It’s unclear why this change was included in the budget. But it’s likely that this is yet another attempt by some state leaders to shy away from traditional academic measures. It doesn’t seem to matter that students have ten other seals from which to choose, and several of them don’t require passing a test. Never mind the research that indicates widespread grade inflation, or the relatively recent grade manipulation scandal in Ohio’s largest school district. Forget the intense pressure that’s put on teachers when their course grades become a key part of graduation standards. And certainly don’t pay attention to the fact that course grades and GPAs aren’t comparable across schools and districts, aren’t predictive of college performance for all students, and aren’t clearly linked to workforce success. State leaders would prefer for you believe that letting kids earn two of the seals they need to graduate based on a grade in whatever course their high school decides to offer is definitely in the best interest of everyone.

If a push to allow students to “demonstrate academic competency and mastery in ways beyond state standardized tests” sounds familiar, it should. It’s the same debate Ohio had for years over graduation requirements. This debate was supposedly settled during the last budget cycle, when a wide variety of stakeholders banded together to create a solution that—unlike a competing proposal offered by the State Board of Education—was objective, comparable, and valid. Editorial boards at the Columbus Dispatch and Akron Beacon Journal sung the praises of this solution. Legislators agreed on its merits, and so did the governor’s office. That’s how it became law in the first place. Why, then, does the newly proposed budget undermine such a hard-fought compromise? If cooperation is a worthy goal, then we successfully achieved it. It took us years, but we got here. And now, in one fell swoop, the budget would eviscerate a key component of the compromise.

But lest you get the wrong idea and assume this is just about politics, let me be clear: This provision is not in the best interest of kids. Weakening graduation requirements—even in seemingly small ways—is a slippery slope that ends with students earning meaningless diplomas that don’t represent mastery of the content and skills they need to be successful in college and the workplace. When diplomas become worthless, students pay the price. They enroll in remedial college classes that cost money, waste time, and decrease the chances of completion. They face a constant struggle to keep up with better-prepared peers. And they have difficulty finding and keeping well-paying jobs. High school diplomas are supposed to pave the way for kids to succeed. But when they don’t mean anything, they can’t.

The worst part about all of this, though, is that the students who are most likely to be impacted by this change are low-income students and students of color. Graduation data from the class of 2018—back when the State Board helped get those non-academic standards temporarily in law—suggest that Ohio’s low-income students used the weaker graduation options more frequently than their peers. There’s also a correlation between districts that enroll more students of color, either Black or Hispanic, and those that were more likely to allow students to graduate via the alternatives. The state of Ohio has a responsibility and a moral obligation to all its students to serve them well. But that obligation is particularly strong for economically disadvantaged and minority students, who face challenges that their white and affluent peers do not. This change is a massive disservice to the kids Ohio should be most committed to serving.

Graduation requirements reflect a state’s priorities and beliefs. If we believe that every student deserves a quality education that prepares them for the real world—whether its college or a job—then we have a responsibility to make sure kids are actually prepared. If we believe that our teachers and school leaders are the best in the country, then we shouldn’t be afraid of objective assessments of student learning. And if we truly believe all kids can learn, then we shouldn’t be afraid of high expectations.