School funding in Ohio: Are poor districts getting a fair share? 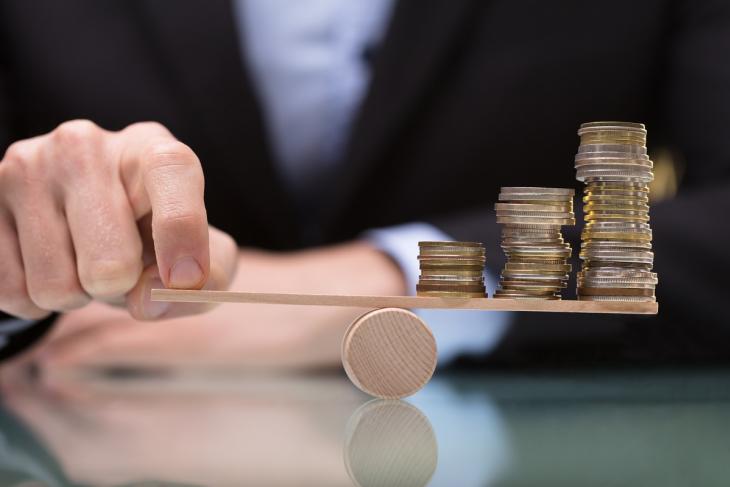 The first two blog posts in my series about school funding looked at big-picture questions of how much Ohio currently spends on K–12 education, and whether increases of the magnitude proposed in the Cupp-Patterson plan are warranted. Funding levels, however, shouldn’t be the only concern, as policymakers also need to consider whether funds are distributed fairly.

One of the central problems the Cupp-Patterson plan identifies is that four out of five Ohio districts do not receive state funding in accordance with the “formula,” a mechanism that is supposed to ensure fair allocations based on districts’ ability to raise local revenue. Instead, most districts’ state funding amounts are affected by the cap or guarantee—more on them later—a more arbitrary way of distributing funds. The Cupp-Patterson plan thus concludes that “the formula doesn’t work.”

But is Ohio’s funding system actually dysfunctional and leading to an unfair distribution of funds? Let’s take a look.

In a system that is fair to school districts, one would expect to see a mostly even playing field in overall expenditures between poor and wealthy districts—or even one in which poor districts spend more to compensate for the higher needs of the pupils they serve. The following charts explore whether this is the case in Ohio.

Figure 1 shows the relationship between districts’ spending (including state, local, and federal dollars) and the median income of their residents. We notice that higher income districts—the points toward the right side of the chart—typically spend amounts comparable to low-income districts. In fact, there is virtually no link between district spending and median income, as indicated by the nearly flat trend line.

Source: Ohio Department of Education. Note: Though not displayed, a weak correlation is observed between district spending and property wealth; similar results also emerge when looking at spending and economically disadvantaged student enrollments.

Another way of examining the fairness question is to divide districts into wealth quartiles—e.g., the top and bottom 25 percent of districts in median income—and compare spending. Figure 2 shows the results. We see that Ohio’s poorest districts spend much more than the wealthiest ($13,186 versus $11,586 per pupil). Some of the funding advantage is due to federal grants, such as Title I, which steer more aid to poorer schools. But as we’ll see next, the state funding program is the primary driver of these results.

While wealthy districts can and do generate far more in local funds, the state can compensate through its allocation formula. This is what happens in Ohio. When focusing on state contributions alone, a clear pattern emerges in which the state’s poorer districts receive more assistance than wealthy ones. As indicated by the downward sloping line, figure 3 shows that low-income districts tend to receive more state assistance, and vice versa. Figure 4 displays a similar relationship when examining property wealth.

Overall, Ohio’s funding system does a reasonable job offsetting differences in district wealth. But as pointed out in the Cupp-Patterson plan, the formula isn’t strictly adhered to. Instead, most districts are on a “cap or guarantee.”[1] Caps limit annual increases in state funding, even if districts are enrolling more students (or wealth is declining). In fiscal year 2019, the cap withheld $478 million in state aid to 162 of Ohio’s 610 districts. Guarantees are the opposite: Relative to the formula prescription, they “overfund” districts that are losing enrollment or experiencing increasing wealth. In 2019, Ohio spent $257 million in guarantee aid for 339 districts.

What if caps and guarantees went away and the formula was allowed to work unfettered? Figure 5 shows that this would improve, albeit modestly, the fairness of the state distribution model. The inverse relationship between property wealth and state funding levels becomes stronger, as evidenced by the higher r-squared statistic. (The link between median income and state aid, not displayed, is virtually unchanged.)

To some, this may be surprising, as the discussion around caps has focused on fast-growing but wealthy districts such as Olentangy and New Albany that would see a bump in state funding. But many capped districts are not as wealthy. Columbus, Dayton, Middletown, and Maple Heights, for instance, are withheld state funds due to the cap. Dayton is an interesting example of how the cap works against districts with an eroding or slow-growing tax base. Although Dayton has lost enrollment—which should reduce its state aid—it also has declining property values, thus boosting its formula-prescribed amount. Due to the cap, however, the district isn’t fully compensated for these losses in local wealth. Meanwhile, there may be misconceptions that all guarantee districts are shrinking and poor. Some are—East Cleveland receives the most total guarantee funds—but dozens of wealthy districts receive extra subsidies via guarantee (e.g., Mason and Grandview Heights).

Removing caps and guarantees would ensure that all districts receive funds according to the same formula, and it would also better direct dollars to the places needing state resources most. That’s a fairer system. Surprisingly, however, the Cupp-Patterson plan doesn’t fully solve the problem. While it ends caps, the plan doesn’t appear to eliminate guarantees permanently.

How could the state unwind both of these policies? A phase-out process would likely be needed to give districts on the guarantee time to right-size their budgets. It would also make the cap-removal process more manageable from a state budget perspective. The table below offers a simple roadmap of how such a process might work. The top half shows that districts on the guarantee would gradually receive less extra aid during the phase-out. Meanwhile, the bottom half shows that the state would pay districts on the cap more of the withheld funds over this period.

Table 1: Illustration of a phase-out schedule to remove guarantees and caps

Ohio’s funding system isn’t “unfair” as some of its critics allege. In fact, in Education Week’s analysis of expenditures, it recently awarded Ohio a respectable “B” rating for funding equity, right around the national average. Claims like “the formula doesn’t work” aren’t quite right. The overall funding picture indicates that poor districts usually receive amounts on par to well above those of affluent ones. Much of this levelling is the result of the state’s funding program.

A more accurate claim, however, is that “the formula isn’t used.” On that count, Ohio has work ahead to improve its fairness to all districts by funding them according to the same formula without the unneeded distortion of caps and guarantees.

[1] Per House Bill 166, the use of the funding formula has been temporarily suspended for FYs 2020–21. Districts’ funding amounts are generally based on FY 2019 allocations when the cap and guarantee were in place.