Ohio should be more transparent about its federal Covid relief spending 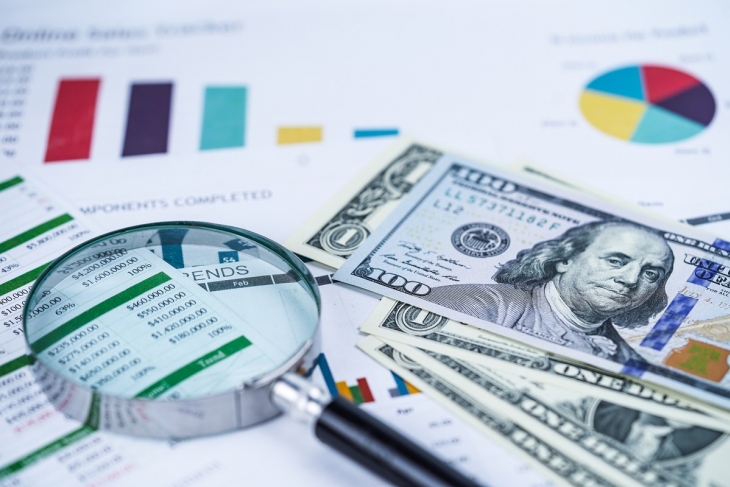 Over the last few years, the federal government has sent billions of dollars in emergency funding to states via several relief packages aimed at addressing the impacts of Covid-19. Ohio schools received more than $6 billion, with the largest influx arriving courtesy of the American Rescue Plan (ARP), the final federal relief package. In accordance with federal guidance, Ohio set aside 10 percent of these funds to pay for state-level initiatives. Although we have a general idea of how the state has been spending some of those relief dollars, there doesn’t appear to be an easily accessible website or downloadable document that offers a detailed accounting for the expenditures.

The same is true for districts and schools that are spending the remaining 90 percent of federal funding. The State Board of Education has discussed district expenditures at a few of their meetings. There are some news stories about initiatives and improvements that are being paid for. And several districts outline on their websites how they are using or plan to use the funds. But for the most part, this information is surface level—lists with vague and generalized phrases like “virtual tutoring” or “summer scholars” accompanied by a dollar amount—and districts rarely explain what their specific strategies are, how they align with overall strategic plans, or how they will likely impact students in the short- and long-term.

In some cases, this lack of information is a huge missed opportunity. Columbus City Schools, for instance, plans to implement “LETRS reading and training for elementary teachers [and] administrators.” But that phrasing alone isn’t enough to clue in the average parent or taxpayer that LETRS—Language Essentials for Teachers of Reading and Spelling—is an early literacy professional development program that’s rooted in the science of reading and has played a crucial role in the “reading miracle” happening in Mississippi. Considering that the district earned only one star on the early literacy component of the most recent state report cards, you’d think funding a promising literacy program would be something they’d want to shout from the rooftops. Instead, it’s buried in a list.

To some degree, the lack of detailed information about Covid relief spending in Ohio isn’t surprising. The federal packages that awarded these funds included very few guardrails, and though Ohio established a few of its own, they weren’t particularly stringent. At the end of the day, without strict public transparency rules to follow, it’s unlikely that most Ohio school bureaucracies will be readily transparent. But that doesn’t mean that districts and the state shouldn’t do a far better job of being open with the public. Indeed, a district in another state has shown us what’s possible.

In mid-December, The 74 published an in-depth look at Saint Paul Public Schools (SPPS) in Minnesota, where district officials are closely tracking and reporting their roughly $207 million in ARP spending. District leaders awarded federal funds to schools based on seven focus areas: systemic equity, positive school and district culture, effective and culturally responsive instruction, college and career readiness, program evaluation and resource allocation, family and community engagement, and safe schools. Within these focus areas, the district identified specific strategies aimed at addressing student outcomes impacted by the pandemic. Which schools are implementing each strategy, a list of activities associated with the strategy, and short-, medium-, and long-term target outcomes are all readily accessible on the district’s website. For example, in the college and career readiness focus area, the district has identified more than half a dozen strategies. Here’s a look at the information provided for one of them: 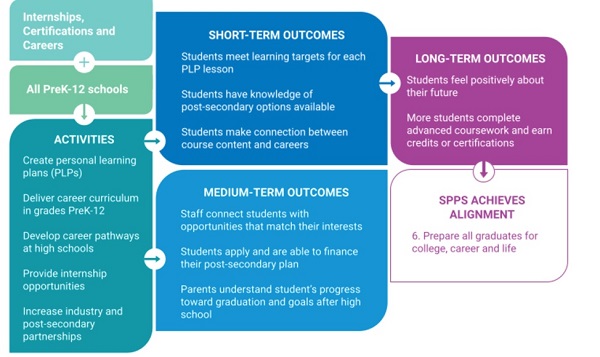 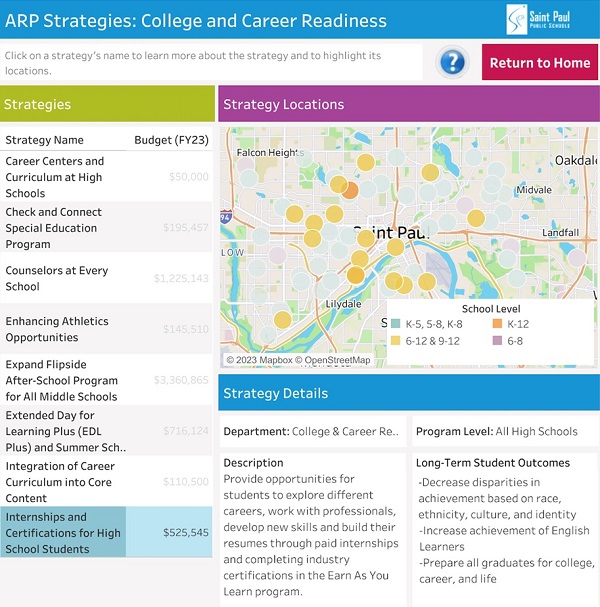 But SPPS didn’t stop there. The district’s budget dashboard also breaks down ARP funding by focus area and individual strategy. That means at any given time, anyone can visit the district’s website and click through an interactive tool that displays a brief description of what each strategy aims to accomplish, how much the district budgeted for it, and how much has been spent so far.

It’s important to note that based on what’s seen here, SPPS unfortunately didn’t establish any measurable, time-sensitive academic goals. But by identifying focus areas and strategies in such a specific way, the district did open the door for parents, advocates, and the general public to hold them accountable for results. For instance, as part of its systemic equity focus area, SPPS budgeted nearly $1.5 million for recruiting and retaining teachers of color. In a few years, if the district hasn’t diversified its teaching staff in a meaningful way, advocates will have the data to ask tough questions.

What’s happening in Saint Paul is a clear example of what’s possible when districts take transparency seriously. SPPS leaders could have settled for making a list of initiatives and costs, publishing it on their website, and then calling it a day. Instead, they identified focus areas aligned to the district’s strategic plan, broke them down into individual strategies, and then outlined what implementing those strategies would entail, how much it would cost, and how it could impact students. In doing so, they weren’t just fiscally transparent, but academically transparent, too. They clearly communicated to parents and families how they planned to address the pandemic’s impact on students, even if a focus on measurable academic achievement seems conspicuously absent. It remains to be seen whether the district’s efforts will indeed improve student outcomes. Initial data on several programs seems promising. But it matters that district leaders were so transparent about their spending.