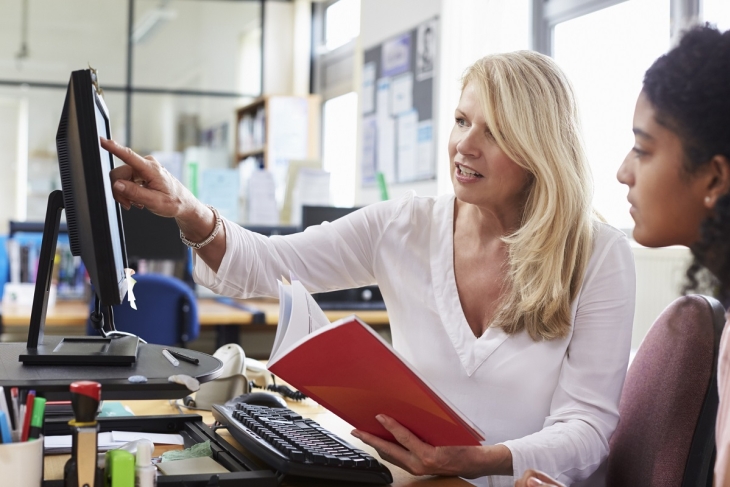 Starting a teaching career is no easy feat. There are students and staff to get to know, curricula to learn, school routines and expectations to get acquainted with, and a host of other challenges. For many novice teachers, the first few years can be overwhelming enough to push them out of the profession entirely.

To help new teachers get off on the right foot—and to prevent too many of them from leaving the field due to a lack of support—Ohio established the Resident Educator Program (REP). A state-level initiative that began in 2011, teachers are required to complete REP before they can become eligible for a professional teaching license. The program is best understood as having two parts:

It’s important to note that the ideas behind REP and RESA are evidence-based. The Institute of Education Sciences found that novice teachers who are assigned a first-year mentor are more likely to stay in the classroom. A review of the research on the impact of induction and mentoring programs found that, in most studies, beginning teachers who participated in some kind of induction program had higher satisfaction, commitment, or retention; performed better at various aspects of teaching, such as developing lesson plans; and that their students demonstrated higher gains on academic achievement tests. In that same vein, a 2017 study shows that induction programs for new teachers can have overall positive effects on student achievement in math and English language arts.

Given the research, it’s no surprise that the Ohio Department of Education says REP was designed to “improve teacher retention, enhance teacher quality, and result in improved student achievement.” RESA, meanwhile, was intended to function as a final stamp of approval from the state; a teacher version of the exam that medical residents must pass before they can practice unsupervised. Novice teachers who demonstrate their skills by passing RESA can continue teaching in Ohio classrooms, but those who fail to pass after three attempts are barred from a professional license and must find themselves a new career.

It’s also important to acknowledge, though, that REP and RESA themselves have not been the subject of rigorous, empirical study. As far as I can tell, there is no publicly and readily available evidence that Ohio teachers who perform well on RESA produce better student outcomes than those who don’t perform as well. Similarly, there is no evidence that REP or its associated supports have increased teacher quality (as measured by student outcomes or teacher evaluation scores) or decreased the likelihood of attrition. The closest thing we seem to have is a very limited 2016 study from the University of Findlay that examines “open-ended commentary” from teachers regarding REP. Most of the 245 teachers (which doesn’t even amount to 1 percent of Ohio’s teacher workforce at the time) who were surveyed didn’t believe that the program improved their ability to meet the Ohio Standards for the Teaching Profession.

The upshot? After more than a decade of implementation, it’s unclear whether REP and RESA are actually doing what they were designed to do. The ideas are research-based. The teachers union and a former state superintendent have voiced support for the program. But there are also teachers who claim it’s nothing more than a “cumbersome process” that adds to their workload and increases their stress levels.

Furthermore, the absence of proof that the program is effective—and the apparent disagreement among practitioners about whether it’s worth it—has led to plenty of legislative tinkering. The General Assembly went so far as eliminating the program in the 2017 budget. A last-minute veto from then-Governor Kasich saved it, and RESA underwent a significant overhaul soon after. Last year, the legislature knocked REP down from a four-year program to a two-year one (a change that won’t go into effect until next year). A bill that was passed by the House this summer aims to make additional changes, including allowing resident educators to take RESA as many times as they want.

The only way to avoid several more years of controversy—and to prevent well-meaning lawmakers from watering down the program or throwing the baby out with the bath water—is to gather as much information as possible about its effectiveness. From a quantitative standpoint, the Ohio Department of Education or independent researchers should dig into the data to determine whether high RESA scores are correlated with higher value-added scores or better teacher evaluations. We also need more systematic and current information about how new teachers perceive and experience the program. To accomplish this, the state should:

The bottom line is that effective and well-implemented induction and mentoring programs benefit both teachers and students. Ohio has had a seemingly well-crafted one on the books for more than a decade, but we have no idea whether it’s effective. Rather than continuing to allow legislative tinkering that may or may not be improving it, state leaders should make sure that we have the information and data needed to assess the program and, if necessary, improve it.