Interdistrict open enrollment allows students to attend public schools outside their district of residence. It is among the largest and most widespread of school-choice efforts in the United States but often flies under the radar in policy discussions. In Ohio, over 70,000 students open enroll into schools outside their district of residence. However, despite the large scale, relatively little is known about the operation of open enrollment and the outcomes of students who participate in it.

The report yields the following findings:

This is invaluable new data for a little-understood but heavily-utilized program. We urge you to download the report to learn more about what works for open enrollees across Ohio.

To see if your district participates in open enrollment, click on the image below to access a searchable, interactive map of Ohio (to scroll side to side, use the small arrow at the bottom of the list of icons) : 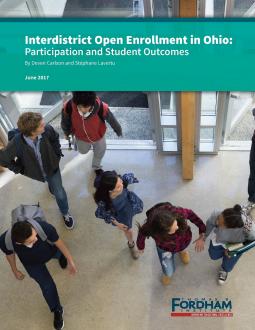