The central problem besetting K-12 education in the United States today is still—as for almost thirty years now—that far too few of our kids are learning nearly enough for their own or the nation’s good. And the gains we’ve made, though well worth making, have been meager (and largely confined to math), are trumped by gains in other countries, and evaporate by the end of high school.

From where I sit, the basic strategies aren’t ill-conceived. Rather, they’ve been stumped, stymied, and constrained by formidable barriers that are more or less built into the K-12 system as we know it.

This much everybody knows. But unless we want to live out the classic definition of insanity (“doing the same thing over again with the expectation that it will produce a different result”), we need to focus laser-like on the barriers that keep us from making major-league gains. If we don’t break through (or circumnavigate) these barriers, academic achievement will remain stagnant.

The barriers I’m talking about are not cultural issues, parenting issues, demographic issues, or other macro-influences on educational achievement. Those are all plenty real, but largely beyond the reach of public policy. No, here I refer to obstacles that competent leaders and bold policymakers could reduce or eradicate if they were serious.

How much difference would that really make? It’s possible, of course, that we’re pursuing the wrong core strategies. Maybe standards-based reform has exhausted its potential (as Mark Schneider suggests in The Accountability Plateau). Perhaps choice and competition really cannot lift all boats. Possibly technology is overrated, alternate certification can never amount to much, teacher quality is doomed to mediocrity, principals don’t truly want authority, etc.

Could be. But from where I sit, the basic strategies aren’t ill-conceived. Rather, they’ve been stumped, stymied, and constrained by formidable barriers that are more or less built into the K-12 system as we know it.

Those barriers aren’t accidents. They’ve been erected by adult interests, bureaucratic routine, structural rigidity, and political stalemate. And they function to keep anything in education from changing very much. Eight such barriers are especially troublesome. Uninterrupted, they are likely to keep us from making major gains. One ought not, however, despair. On several fronts, promising interruptions and interrupters are emerging. Whether they can muster what it will take to tear down these walls remains unknown.

First and foremost is the archaic governance of K-12 education. I’ve written elsewhere about this problem, but it’s so fundamental and ubiquitous that we tend not even to notice it, much less to think that anything could be done about it. Instead, we take for granted (like it or not) that we’re stuck forever with local control in the form of school districts, separate from the rest of government and run by school boards that are particularly vulnerable to capture by adult interests, as well as with a marble cake of federal, state, and local decisions, regulations, and funding streams.

There are beginning to be exceptions, however, that illustrate what could be possible. Mayoral control of the schools in D.C., New York, Chicago, and several other major cities is one example. State-operated “recovery” school districts in Louisiana, Tennessee, and Michigan are another. The “parent trigger” idea is a third.

Second, our dysfunctional system of school finance puts the brakes on just about every reform while perpetuating inequity. We don’t fund learning, we fund programs. We don’t fund kids, we fund adult job slots. We don’t fund schools, we fund district-wide categoricals. We don’t blend the money from multiple sources into a single, flexible stream; rather, we leave it in discrete programs and silos, each with its own rules, uses of funding, and accounting obligations.

Here, too, small cracks can be seen in the glacier. Several states (notably Michigan, Indiana, and Vermont) have shifted their funding systems to mostly state dollars. Voucher programs, though still limited (but growing!), enable at least some of the money to accompany individual kids to the schools of their choice. A few cities have devolved as much budgetary authority as they can—district-wide teacher contracts are a huge constraint here—to the building level. Waivers can be sought (though seldom are) from states and Washington that allow enterprising superintendents to combine and redirect some of the categorical funds. And a few brave school-finance experts are probing deep into district budgets to see how much things really cost and where the dollars really flow.

Third, our academic standards are too low almost everywhere. It’s not just that too little is being achieved; it’s that too little is expected. Even where a state’s standards look great on paper—a few do—its “cut scores” for passing the tests aligned with those standards are rarely ambitious, and NCLB hasn’t helped one bit on that front. Fordhamand others have been documenting these problems forever.

The silver lining in this cloud is widespread adoption of the Common Core State Standards for math and reading, and work now underway to produce a kindred set of multi-state standards for science. The Common Core itself turned out well, superior to the academic standards of most states and more or less on par with the best of them. The big questions now are whether it will be properly implemented, which means accompanying it with suitable curricula, assessments, and more—and whether public officials will have the fortitude to stick with it after scads of their current students turn out to be no match for it. Several state education leaders—Ohio’s Stan Heffner and Massachusetts’s Mitch Chester come to mind—are already walking the Common Core walk. In other jurisdictions, it may still be mostly talk.

Which brings us to weak-kneed accountability, the fourth great barrier to real achievement gains. About half the states have high school graduation tests that one must pass to qualify for a diploma but nearly all of these are easy—eighth- or tenth-grade content with low passing scores and multiple make-up opportunities. A few states have “promotional gates”—achievement benchmarks that determine whether you get to move on to the next grade. Many states give ratings or labels to schools according to their academic results and NCLB has added the (“made” or “failed”) AYP designation for schools and districts. Still and all, there are precious few tangible consequences for the adults in the system; it isn’t that demanding for the kids; and schools that find themselves subject to “interventions” or “reconstitutions” usually end up with the minimum-hassle version.

Whether the state consortia now developing Common Core-aligned assessments will be able to agree on demanding “cut scores” is an open question, to be followed by whether individual states using those tests will let those cut scores make any real difference in promotion, graduation, teacher retention (or reward), school reconstitution, and all the rest. Yes, there’s movement toward tying teacher evaluations and pay more tightly to student learning, but we’re still in the earliest stages of that ambitious project and there is much resistance to it.

Fifth, though choice programs of every sort are proliferating—virtual, charter, hybrid, voucher, and more—and though it can be demonstrated that more than half of all U.S. pupils now attend schools that they or their parents chose via one means or another, the facts remain that too many of those choices are mediocre(or worse), that the kids in greatest need of better options are least apt to be able to access them, and that our “schools of choice” for the most part labor under too much input-and-process regulation coupled with insufficient resources.

The best of the CMOs and a handful of one-off schools show that quality is possible, but even they face great difficulty replicating success and expanding their networks. The best state charter laws show that the regulatory and resource challenges can be tackled. But we’ve got a long way to go. 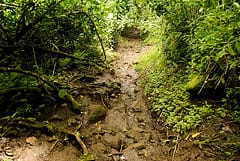 We can forge a path to a brave new education world.
Photo by Daniel Ramirez

Sixth, although instructional technology holds enormous promise to transform education—in both its fully virtual and blended forms—it is stoutly opposed by the usual interest groups, is pushed (perhaps too hard) by politically connected profit seekers who care little about academic achievement, is ill-suited to existing governance and financing arrangements, and is shackled by absurd regulatory provisions that make scant sense even in a brick-and-mortar environment. The Digital Learning Council and others (including the Foundation for Excellence in Education and Fordham itself) are showing where and how paths through these thickets could be cut but politicians and policymakers will have to do the heavy cutting.

Seventh, our human resource practices and policies are sorely antiquated and anti-quality, particularly as regards teachers, whether one is looking at seniority provisions, uniform pay schedules, overly rich pension-and-benefit plans, licensure-and-certification rules, or a hundred other parts of public education’s HR system. There have been bold moves in several states to limit the scope of collective bargaining (a pillar of archaic HR practices), to modernize benefit structures, to make employment hinge more on effectiveness than on credentials and seniority, and to evaluate teachers (and sometimes principals) more on the basis of student achievement. But, once again, we have a very long way to go.

Eighth and finally, our preoccupation with “at risk” populations and with achievement gaps defined as the distance between demographic groups has led to the benign neglect of millions of kids, including but not limited to gifted students and high-achieving learners. America will never solve its international-competitiveness problem just by raising the bottom of the achievement distribution. Though a number of states and districts are trying to enlarge their Advanced Placement programs and to reward top students with college financial aid and other initiatives aimed at high achievers, it’s also the case that tight budgets have shrunk gifted-and-talented programs in many places. (And Congress has zero-funded the only federal initiative that tries to encourage such activities.) Note, too, that widening access to AP and such isn’t necessarily a good thing for the “talented tenth” who were already taking those courses and passing those exams.

With these eight problems unsolved—and more that could be added to the list—as well as gridlocked policymaking in Washington and open warfare in many state capitals, is there reason to be optimistic about the future of K-12 education?

I say yes, albeit cautiously. What gives me the greatest hope today is the emergence—and steadfastness—of a new cadre of change-minded people in positions of influence (think Jeb Bush, the “Chiefs for Change,” Joel Klein, Wendy Kopp, Kevin Huffman, Michelle Rhee, and yes, Arne Duncan) and the birth of a number of new-and/or-improved advocacy organizations, mostly operating at the state level (think 50CAN, Advance Illinois, PIE-Network, Democrats for Education Reform, Students First, Stand for Children, BAEO, the American Federation for Children, Parent Revolution). They’re still no match for the protectors of the status quo—i.e. bulwarks of the barriers enumerated above—but they’re slowly gaining. Let us wish them much clout in the New Year and beyond.