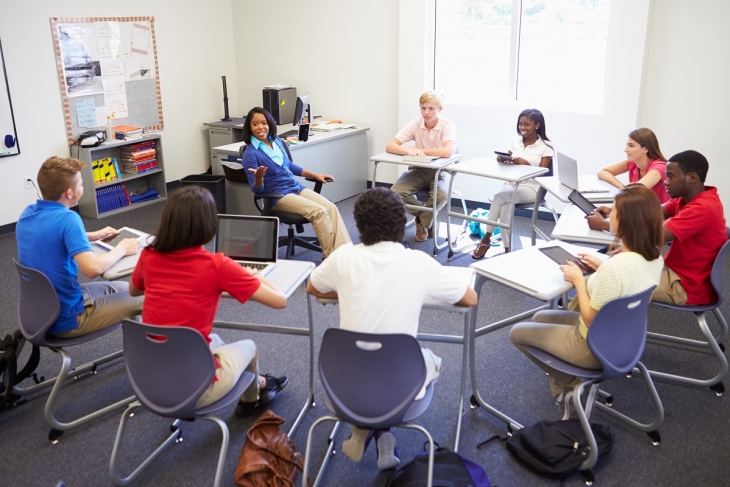 In 2013, President Obama made headlines for his visit to P-TECH, a Brooklyn high school created in 2011 through a partnership between IBM, the New York Department of Education, and the City University of New York. The innovative new school was designed to accomplish two goals: to provide students with a direct pathway to college attainment and career readiness, and to strengthen the local economy by helping build a workforce with strong academic, technical, and professional skills. Unlike a typical high school, P-TECH spanned grades 9–14. Students graduate with both a high school diploma and a two-year postsecondary degree, and participate in work-based experiences like mentorships and internships along the way.

In the years since President Obama’s visit, P-TECH’s Brooklyn campus has graduated four cohorts of students. The model itself has expanded to over 200 schools in eight states and several countries. More than 600 businesses have partnered with these schools, exposing students to a wide variety of career fields including health, IT, advanced manufacturing, and energy technology.

Given P-TECH’s popularity and success, it’s no surprise that Governor DeWine has expressed interest in bringing the model to Ohio. In his recently released executive budget, the governor allocated up to $450,000 over the course of two fiscal years for the creation of a P-TECH initiative in the Buckeye State. But how would it work?

Well, for starters, it’s a pilot program. Pilot programs are typically short-term, small-scale experiments aimed at testing whether a model is feasible and effective. That’s exactly what the governor has opted for with P-TECH. Only three schools will be chosen to participate in the pilot, and the funding they’re awarded must be spent within two years. The program would fall under the purview of both the Ohio Department of Education (ODE) and the Ohio Department of Higher Education (ODHE), though ODE would handle the distribution of funds.

If the governor’s P-TECH proposal gains legislative approval, the departments will be required to issue a request for proposals from interested applicants by September 1 of this year. That’s not a ton of time—just a few short months—and the tight timeline combined with the fallout of Covid-19 probably means that the list of applicants will likely be small. Fortunately, the eligibility requirements allow a pretty broad set of schools to apply. Traditional public districts, charter schools, STEM schools, and certain schools operated by Joint Vocational School Districts are all eligible.

The departments are charged with selecting the best applicants, but must give priority to schools that serve historically underrepresented populations of students, and must make “every effort” to select schools in different locations throughout the state. The proposed budget also explicitly outlines a list of criteria that eligible schools must meet. To qualify for funding, the proposed P-TECH model must:

The proposed timeline calls for three schools to be selected by October 2021. They will receive up to $150,000 in 2022 for planning activities (the budget outlines what these activities might include), and another $150,000 in 2023 to actually implement the P-TECH model with ninth grade students. Although schools will be evaluated based on the sustainability of their model, the money allocated for planning and implementation won’t replace other forms of state funding.

There are two additional provisions worth noting. First, the proposed budget builds on Ohio’s immensely popular College Credit Plus (CCP) program by allowing students to participate in CCP during any school year in which they’re enrolled in a P-TECH school. This should make it much easier for interested schools to meet the eligibility criteria related to providing dual-enrollment opportunities so students can earn an associate degree along with their high school diploma. CCP has been part of Ohio’s educational landscape for years now, so offering dual-enrollment options shouldn’t be a stumbling block for participation. The budget also removes some of the restrictions around CCP participation. For example, credit hour and duration limits that apply to typical CCP participants don’t apply to students who attend a P-TECH school. The budget doesn’t explicitly mention the readiness standards that other students must meet prior to enrolling in a college course through CCP. But it’s reasonable to assume that the departments will interpret the provision that allows all P-TECH students to enroll in CCP as an exemption from readiness standards.

Second, because P-TECH is set up as a pilot program, it would be under even closer scrutiny than similar programs. The departments are charged with evaluating the progress and sustainability of each model, as well as the partnerships between schools and businesses. They must report their findings to the governor and the General Assembly by December 21, 2022.

It's still early in the budget process, and lawmakers have a lot on their plates, so it’s hard to predict whether the governor’s P-TECH proposal will survive. But it’s an innovative program that’s proven successful elsewhere and would give both students and businesses a leg up. That’s exactly the kind of program lawmakers have supported in the past. Here’s hoping they do so again.