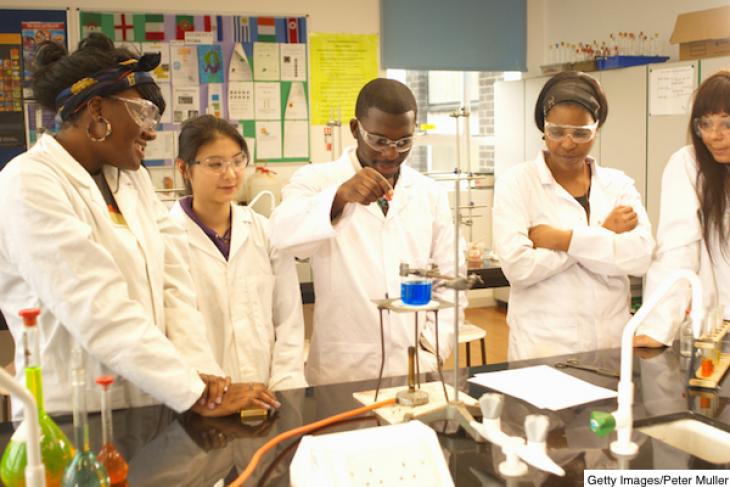 Last week, the U.S. Department of Education released the results of its most recent national science test for fourth, eighth, and twelfth graders—the 2015 National Assessment of Education Progress (NAEP). There’s a bit of good news, in that average scores are up slightly in the fourth and eighth grades and race-based achievement gaps narrowed slightly since 2009.

This was what Peggy Carr, acting commissioner of the agency responsible for assessment, seized on, as reported by the Washington Post. “This is exactly what we like to see,” she proclaimed, “all students improving but students at the bottom of the distribution making faster gains.”

Her statement erred in at least two important ways. First, it’s simply not true that all students improved. Twelfth grade was, regrettably, flat. And more importantly, our development of high achieving students might be, too.

It’s true that in fourth and eighth grade, if you define “high achievers” as those who score in the top ten percent, then the scores of such students have risen, including those of low-income and minority students. But we should be wary of such a definition. Recall that NAEP also reports student and state performance against three “achievement levels,” dubbed Basic, Proficient, and Advanced. This is, in part, because set score-cutoffs are meant to reflect real-life aptitudes. Proficient is defined as “solid academic performance for each grade assessed.” Advanced indicates “superior performance.” We should thus resist calling scores below that level “high-achieving,” even they’re in a given subgroup’s top decile.

Viewed in this more objective manner, the news isn’t very good. In science in 2015, the proportion of students scoring at or above the Advanced level was flat across the board—and woefully small (or negligible) for poor and minority pupils. No more than 2 percent of American students were Advanced in science in any of NAEP’s three grade levels—rates that have all failed to rise since the 2009 test administration. Worse, in all three grades, the percentage of low-income, Black, or Hispanic students who score at the Advanced level rounds to zero. In other words, according to this rigorous, highly regarded, and nationally representative science assessment, disadvantaged pupils attending American schools have virtually no chance of being high-achieving science students.

A further problem with Dr. Carr’s sentiments is her apparent contentment that low achievers are rising more than others. It’s great that they’re rising. But what about everyone else? I understand the impulse to show particular concern for our lowest-achieving students. But are we so sure that we’d rather have big gains at the bottom rather than big gains at the middle or at the top? Or across the board? Carr seems to be echoing the oft-said but always-misguided view that higher-achieving students require less attention because they’ll be fine no matter what. Such attitudes lead to classes geared to universal but modest proficiency, taught by instructors who are admonished to raise the floor but under no pressure to lift the ceiling. In such environments, advanced students are bound to languish. Yet they, too, deserve an education that develops their potential and maximizes their attainments.

The country also needs these children to be highly educated in order to ensure its long-term competitiveness, security, and innovation. Our highest achievers are young people who hold perhaps the greatest promise for making major advances in science, technology, medicine, the humanities, and much more. Our nation’s economic vitality and growth depend heavily on the quality and productivity of our human capital and its capacity for innovation.

Moreover, such neglect is inequitable. The students most harmed are disadvantaged high achievers—boys and girls who face such challenges as disability, poverty, ill-educated parents, non-English speaking homes, and tough neighborhoods. They depend far more than upper-middle-class students on the public education system to do right by them. So if they don’t receive the attention that they—like all children—deserve, many will fall by the wayside, destined by circumstances beyond their control never to realize their full potential.

The NAEP science results clearly show—yet again—that U.S. schools aren’t doing right by our high-achieving students, and that they’re failing miserably to bring disadvantaged children to the level of high achievers. Recall, once more, that zero percent reached the test’s top achievement level. If this is “exactly what the department of education likes to see,” then we have a serious problem.

One must also wonder about Dr. Carr’s expectations. In the same interview with the Washington Post, when asked how the U.S. compares to other countries on international tests such as PISA and TIMSS, she replied that “we’re not that bad at science.” Huh? PISA’s science exam is given to 15-year-olds, and TIMSS administers science tests to fourth and eighth graders. On only one of those three measures did the U.S. perform in the top five, compared to other affluent countries. The other two gauges showed America in the middle of the pack, at best.

I don’t discount the gains our schools have made for some kids. But we can recognize and applaud those accomplishments without framing the results as universally positive. Our job is to educate all our students to the max. It’s the right thing to do for them. And it’s the right approach for America’s future. The new NAEP results plainly show that today we’re failing at that mission.